Big Changes In The World Of Payments Will Not Bypass Serbia

How we will soon be paying on everyday level and what significant changes are coming to the world of financial services and banking were among the key topics of the panel discussion „Mobile payments in Serbia – past, present and future“. H.E. Arne Sanes Bjornstad, Ambassador of Norway to Serbia and Norwegian fintech Auka hosted the panel.

The way of paying and providing financial services in Serbia, as well as across Europe, will be affected by Revised Payment Service Directive – PSD2, adopted in EU early this year, even though Serbia is not the part of EU at the moment, it was concluded at the panel. This directive enables third parties to provide financial services, whether these are fintech companies or giants such as Google, Apple, Facebook or Amazon.

According to PSD2, banks will have to provide access to third parties to account of their clients through APIs and enable them to form finance services based on bank data and infrastructure. This will have to happen September 2019 the latest, when Regulatory Technical Standards (RTS), which regulate PSD2, will come to power.

“People don’t like change, but if you give them a solution, they will accept it. This can apply as well to mobile payments. When mobile payments come to a market, it is like a tsunami, and you don’t know what is going to happen. Banks can be very scared, but they want to have an opportunity to be a part of that because nobody knows what this ‘tsunami’ will bring. You can’t fight change, but you can be the change“, underlined Daniel Doderlein, CEO and Founder of Auka.

Srđan Novaković, Head of Group Digital Banking at Addiko Bank Serbia exclaimed that market in Serbia, and the regional markets are ready for the mobile payments:

„Customers are glad to accept it, but it’s not all about the customers. It’s about the merchants as well, the big players, and also about the banks who need to get together and to launch the best and the only one mobile app that would be acceptable for the customers. I think it’s feasible and we need to be quick because the customer wants to have a simple solution directly on the mobile phone rather than to use payment cards”.

“If banks go together in this, we can succeed. The banking is going to change. All the banks in Serbia have the will, but you need permission as well. Serbia was often used as a pilot country for this”, said Miloš Polovina, President of Digital Banking Committee at the Association of Serbian Banks.

Zorana Branković, Head of Multichannel Office, Banca Intesa Serbia, said that the future of mobile payments in Serbia is bright and that there is a lot of positive will from the banks’ side, from the National Bank of Serbia and the users as well. „In the next three to four years we will have a completely different situation in banking and payments in our country. Banca Intesa is doing a lot of things already in this regard“, she added.

In research that Auka commissioned in April this year, 2000 senior decision-makers in banks were asked about payments regulations and mobile payments, out of them 100 Serbian bankers.

In the survey, even though 45 per cent of Serbian bankers said that banking would fundamentally change in the coming period, not more than 30 per cent of them said they are ready to accept that third parties take over the payment channels.

Doderlein added that the biggest obstacle to introducing mobile payments would be if no bank would have the courage to cooperate with fintechs. 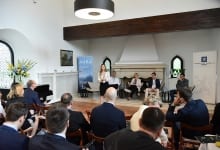 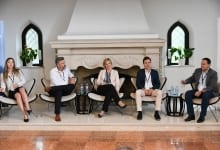 We believe that we can together turn problems into opportunities and achieve results for a cleaner and brighter future. Those of us in the...
Read more

Proven Business Across The Nordic Market

Elnos Group is a domestic company that considers Sweden, Iceland and Norway as its second home. Headquartered in Southeast Europe, it operates throughout the...
Read more

Smart Way To Get Started In Serbia

Ambassador Of Norway Hosted Members Of The Nordic Business Alliance

A business networking event was held at the residence of Norwegian Ambassador H.E. Jørn Gjelstad, organized in cooperation with the Norwegian Embassy and the...
Read more