Prime Minister Ana Brnabić said at the opening of the 26th Kopaonik Business Forum that Serbia, following hard fiscal consolidation measures, had the fourth straight year of stable public finances, and added that in 2018 had a surplus in the budget of RSD 32.2 billion

Prime Minister pointed out that Serbia today is undoubtedly in a much better situation than it was 10 years ago when the world economic crisis began.

Our goal is to put it into the framework of the so-called “safe zones” of 45% of GDP, the Prime Minister said.

According to Prime Minister Ana Brnabić, Serbia has done a lot to improve the business environment, which is evident if we compare our position to the Doing Business List of the World Bank then and today, but it is even more important that this is evident in the number and size of investments in Serbia. 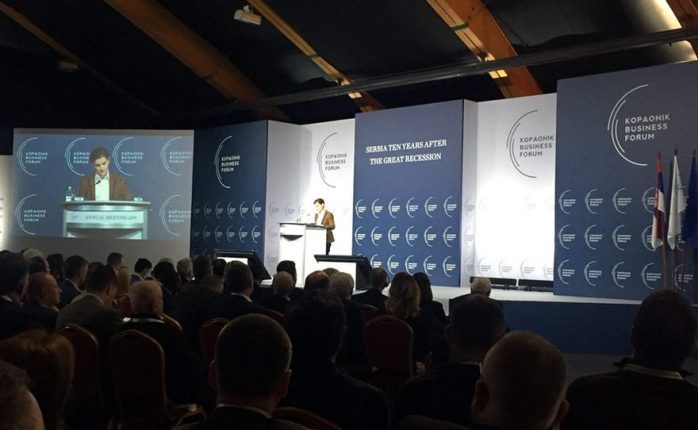 However, she added, even such a growth rate is not enough for Serbia to catch up with EU members in the foreseeable future, and our economy is still not fully prepared for sustainable growth.

Therefore, we need to change things further so that our growth will be higher and sustainable in the long run, the Prime Minister stated and outlined the most important sectors for sustainable growth.

The huge problem we are facing in regards to agriculture is that we did not invest in systems that would make it more resistant to climate change. That is why we invest in irrigation systems.

We are also investing in the electrification of fields, so that, as we end irrigation systems, farmers can use them in the best way. We do not have automatic anti-hail systems for better protection against hail than we currently have.

In 10 days, we will put into operation 28 of the planned 99 automatic anti-hail stations throughout Serbia, she said.

We adopted a new Decree that allows incentives to capital investments to encourage investment in equipment.

Also, our great potential is the digitisation of agriculture, because of which we are investing enormous support and significant resources into the BioSens Institute and, together with the EU, we are building the European Centre of Excellence for Digital Agriculture in Novi Sad, said Prime Minister Ana Brnabić.

For more than three decades, Serbia has not built a new energy facility. There are also some results here, but there is a significant place for further improvement.

By 2020, we will have about 700 MW of new energy capacities from renewable energy sources. We started construction of a new thermal power plant, Kostolac B3, with a capacity of 350 MW.

We are planning to build 2-3 hydropower plants with the Republic of Srpska, which is about 200 MW capacity. In addition, most of the investment cycle is in the pipelines to have access to larger quantities of gas and to divide the gas pipeline itself across Serbia.

As far as mining is concerned, I will mention only two projects that at the moment act as extremely important for our growth in the future.

One is certainly a strategic partnership with the Chinese company ZiJin, which last year became the owner of 63% of RTB Bor and which guaranteed investments of $ 780 million in the first three years of operation, of which we expect to invest approximately $250 million this year to improve the business of RTB. At the moment, RTB contributes to our GDP with some 0.8%, and we expect this to increase to 1.8%.

The second project is Jadarit in Loznica and the fact that Serbia has about 12% of the world’s lithium reserves. We have excellent cooperation with Rio Tinto, and we expect that the previous Feasibility Study will be completed by mid-2010 and the construction of the chemical plant will start in 2021. The estimated potential impact of Jadarit project is 1.3% of GDP, which can be significantly more if we can attract partners who will use lithium for production in Serbia and export of semi-finished products or final products from Serbia.

Finally, it is more than clear to us how much construction and infrastructure are important for dynamic and robust growth, which is why we have increased the budget for capital investments this year, and for the first time, it exceeds RSD 200 billion.

But when it comes to our industry, the economy and services, and the challenges that we face, the biggest task that this government has before itself is to transform our economy into an economy based on innovation and knowledge to be side by side with more developed countries of Europe.

This is our future and this is currently our most important challenge. If we do this, we will leave the generations that come to us for a healthy economic model that will bring robust growth year after year.

We introduced programming as a compulsory subject from the 5th grade of elementary school. We connected all schools to the Internet within AMRES. We piloted digital textbooks, and today we have 2,000 digital classrooms.

This year, we budgeted €20 million to connect 500 primary schools to high-speed internet and increase the number of digital classes to 10,000. We have increased the number of specialised IT departments in high schools throughout Serbia fivefold.

We trained more than 30,000 teachers only last year. We have expanded our capacities at faculties and institutes. We have established a Science Fund that aims to increase investment in science, as well as cooperation between science and the economy. We are investing around €100 million in R&D, innovation and start-up infrastructure.

Even €1.135 billion is export of ICT services in 2018. This is today the branch with the largest net exports from Serbia and the fastest growing economic sector in Serbia. In 2018, the ICT sector increased by more than 26% compared to 2017, and in 2017 about 22% compared to 2016. Do we know of any other sector that records such growth?

To enable the transformation of our economy, we slowly change the policy of subsidies and tax incentives to stimulate investment in technology and knowledge more and more and move slowly from incentives for the workplace.

I believe in Serbia that creates today and in the future. With the great help of the Creative Industries Council, we launched Serbia Creates platform in order to support our creative individuals, initiatives, companies and events.

There is no dynamic, sustainable development without effective administration, the Prime Minister stressed, and expressed her satisfaction with the abolition of some meaningless administrative barriers.

She also pointed out that over the past year a public debate on the amendments to the Constitution in the field of the judiciary was completed, adding that, when it comes to the rule of law, Chapters 23 and 24, as well as the dialogue with Priština, are focal points of our European integration.

A healthy economy is based on the value system, which makes one country “European” even though it is not in the EU, Prime Minister Ana Brnabić concluded.

Opening of the Philanthropy Festival in Belgrade