The Basketball Federation of Serbia (KSS) has published a book Bora Stanković – The Game of My Life – the first autobiography of the most significant Serbian sport’s official.

Two book promotions were held in three days; in Belgrade and at the Great Hall of the University of Niš. Borislav Stanković, who was the FIBA Secretary-General from 1976 to 2002, revealed in the book many unknown things about himself including a letter that „shaped both his life and career“, as he mentioned at the book promotion in Belgrade.

Stanović’s words were recorded by Aleksandar Miletić, a columnist of the Politika daily and the author of the book „Jazz Basket“.

The book can be bought at Roda and Laguna’s stores. Bora Stanković waived the book’s royalties while the KSS and Laguna also waived a portion of the book’s sales in favour of the Nataša Kovačević Foundation. 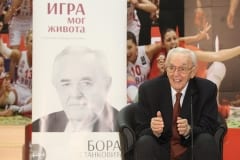