Timing Is The Biggest Challenge

From 2018 Milica Lundin has successfully headed the International Women’s Club of Belgrade from strength to strength. IWC is a club that gathers women of foreign nationality living in Belgrade. Mrs Lundin is a Swedish musician and culture manager. Her husband is current Ambassador of Sweden to Serbia, H.E. Jan Lundin. Due to her husband’s diplomatic vocation, Milica has lived with her family in Sweden, Lithuania, Russia, Germany and Serbia.

What are the biggest challenges, in your opinion, for female leaders today?

– First of all, being the female director of a big enterprise is probably much harder than being president of an International Women’s Club. To be honest, I see the challenges in leadership as already given, regardless of gender. I have never been exposed to gender stereotypes myself, but that is because I do not have so much experience in socalled “male jobs”.

In my opinion, the biggest challenge for a woman would be the timing: does a woman want to pursue advancing in her career simultaneously with the most intensive period of her children’s upbringing? That is if we can call any period particularly critical. It should be a matter of the individual’s choice and life circumstances, but no doubt this critical time can be seen as an obstacle for her productivity by her colleagues and employers. Not everyone believes that a woman can be an ambitious employee and at the same time, engage in her children’s early school age, for instance. Our children do occupy our mind a lot. But I believe it is achievable by those fierce women who possess a strong ability for planning and a reliable support network.

How far have we yet to go until balance and equality become a part of the everyday work-life?

That, again, depends on the country. Some countries have very developed gender equality policies in work-life and beyond. For example, Iceland: You would be amazed by how independent women are and how many gender stereotypes are broken there. For example, it is not unusual for a child to adopt its mother’s maiden surname, although parents are married and living together.

I would say, as soon as everyone is embracing feminism regardless of their own gender, we are on a good path. By feminism, I mean the desire to make women simply equal with men both by law and in practice. Not privileged because they are “a weaker sex”, but simply equal. It is still nice that we are different in some other aspects. Of course, laws have to be applied and obeyed. I think it will be much harder to introduce true eguality in everyday life than in a high level of professionalism. 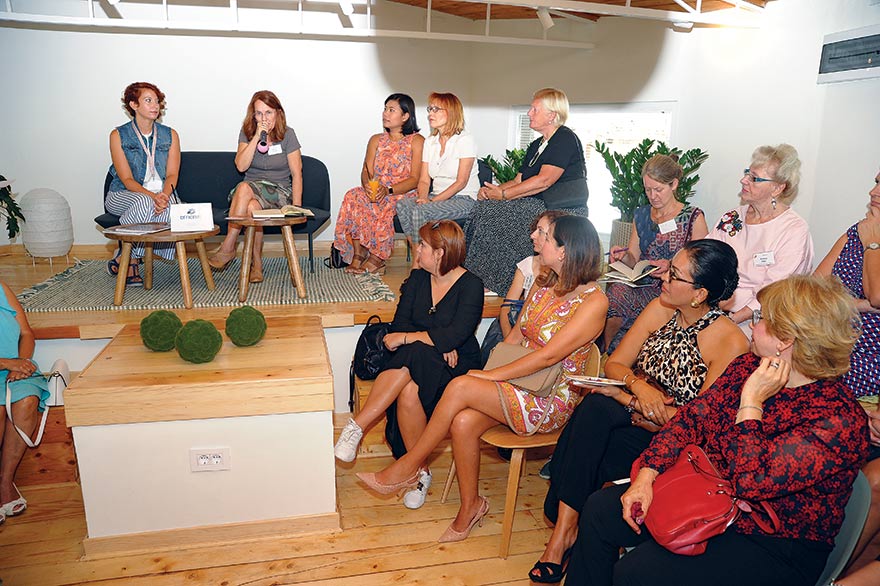 As a mission-driven organisation, IWC aims to help women to adjust to Serbia and its culture, as well as to take part in its charitable actions. How challenging is achieving this goal in 2020, the year marked by the pandemic?

This year is putting particular pressure on us since our club depends on social gatherings. Many of our members are a little exasperated by this long period of self-preservation. What we miss the most are joint visits to museums and trips. But we socialise online, keep each other in good spirits and offer help to those of us who need it. There is also a very intensive exchange through social networks. Our website www.iwc.rs and Facebook page are very much alive, and we are publishing all the news we can about our projects funded by the proceeds from last year’s Charity Bazaar.

We can proudly say that the beneficiaries were very appropriately chosen. All six of the projects we chose deal with the elderly and four of them deal with humanitarian help throughout different parts of Serbia. The help has already been delivered, and the projects were vital for the critical period of May and June 2020.

IWC will publish a book of our impressions of, or rather our relationships with, the city of Belgrade

IWC is producing a book instead of the annual Charity Bazaar this year, due to pandemic restrictions. Please tell us more about the idea behind the book.

We all know how difficult it is right now for all in the private sector to keep their heads above water. We are, therefore trying to avoid asking for donations and sponsorship as much as possible. With a lack of donated goods and with restrictions of public gatherings comes the question of our annual Bazaar. We gave up on planning it for this year, and we looked to our own resources. In the end, why couldn’t a group of strong, educated, cosmopolitan women create a product that would be sold for its cultural value? We came up with an idea to publish a book of our impressions of, or rather our relationships with, the city of Belgrade.

Our foreign ladies each contributed with a text about their favourite place in town and explained why they are attached to it. When matched with nice photos, it will be a popular read, I think.

What do you believe are the main traits and characteristics of the successful female diplomatic leader of today?

There is no such thing as a particular prescription for female diplomats. I was lucky enough to see some excellent diplomatic leaders in these 30 years of my diplomatic life, both women and men. When it comes to success in diplomacy, it is erudition, respect for other people and impeccable tact that make the difference. You may have a good head on your shoulders, be operative and constructive, but without knowledge of history, scholastic and contemporary, and without respectful and a dignified approach to people, you will not gain respect in return. This applies to both women and men.

The charity bazaar, which was organised by the International Women's Club at the Belgrade Fair for the 17th time, gathered more than two and...
Read more

The​ International Women's Club or Belgrade held its December coffee morning at the Crowne Plaza hotel on December 1st 2021. It was attended by...
Read more

DP World is the leading provider of smart end-to-end supply chain logistics worldwide, enabling the flow of trade across the globe. Through an interconnected...
Read more

Brankica Janković, Former Commissioner For The Protection Of Equality

We Must Change Cultural Patterns

We've managed to present the topic of gender equality in public as being very important, which resulted in changing the attitude towards this issue....
Read more

Under the leadership of Prime Minister Fumio Kishida, Japan is implementing various policies aimed not only at overcoming the difficult circumstances arising from global...
Read more

Many New Opportunities For Cooperation

JICA’s cooperation in Serbia will continue based on the Initiative and Country Assistance Policy, while the priority sectors for cooperation will remain private sector...
Read more