We Are Aiming High

Our aim is to advance with the reform cycles we’re conducting to raise the level of Serbian students and education to the level of high ranking countries. With that, we are sending a signal that Serbia is a good place for investment because it has good human capital and educational potential

Serbia ranks 27th of 157 countries when it comes to the Human Capital Index, which has been developed by the World Bank.

Human capital – the knowledge, skills and health that people accumulate throughout their lives – is a key factor in stimulating sustainable and inclusive economic growth.

From the ministry’s perspective, how do you interpret this index and the key place for intervention within your department?

– The index looks at human capital in its early stage or its prospects. The fact that we’re ranked 27th in the world is the result of TIMSS testing (Trends in International Mathematics and Science Study – TIMSS), which covers children up to the age of 11. That index is a good indicator and shows that we start education reform from the earliest age, not just from the first stage of primary school, rather we’re starting from the previous stage says for CorD Mladen Šarčević, Serbian Minister of Education, Science & Technological Development.

Specifically, new preschool plans and curricula encompass a child from the age of three. We have created a unique curriculum that enables children to express their creativity, knowledge, interests and abilities during their time in nursery school. It has been declared the best such programme in Europe and has a symbolic name: “Years of Ascending”. The reform cycles that we’re conducting encompass all ages of primary and secondary schools, while we pay particular attention to the quality of teaching. Our goal is to have an outcome model, i.e. one that prepares children to apply the knowledge they’ve acquired.

This will raise Serbian school pupils and education to the level of highly ranked countries.
With this, we send a signal that Serbia is a good place to invest because it has good human capital and educational potential.

When it comes to the education sector, how does Serbia respond to the desired transition of the Serbian economy from a work-intensive to a knowledge-based economy and digital transformation?

– The Ministry of Education, Science and Technological Development is focused on constantly improving the education system, while the transition of the economy is conducted in several ways. One of them is by introducing dual models and profiles to the system of secondary school education.

Some 32 profiles have so far been introduced. We cooperate with more than 600 companies and more than 4,500 pupils have been included in this process in the first year.
We also include professional profiles that are in short supply. 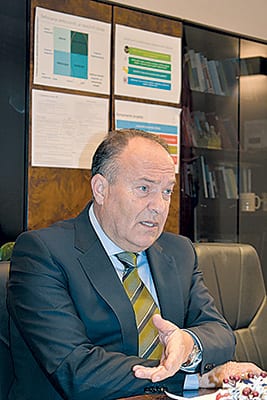 The Law on Dual Education in Higher Education is also being finalised, in which we are striving to regulate the economy’s interest in the most highly-sought professional profiles through the direct education of candidates for such positions.

When it comes to the digital transformation process, Serbia is a leader in broader scales,
because 18 months ago it introduced compulsory computer programming for children from the age of 11 and a programme for those gifted in IT and computer studies in high schools. This is a very difficult and demanding programme that 1,300 students already managed to enrol in during the course of the last school year throughout Serbia.

We constantly increase the quotas of those colleges that provide an education in IT, while exports of software and the number of companies formed in this area increase by more than 20 per cent each year. Serbia is a serious leader when it comes to this process.

It is also a fact that the whole of education is being digitalised through the introduction of digital classrooms (2,000 classrooms have been equipped, with additional 8,000 planned), through constant training for all levels of digital literacy, both for children and adult workers and through the transferring of the complete school administration to digital form. The plan is for all school populations to be covered by an electronic diary in the next two years.

In this context Serbia, what should be introduced to Serbia by the current reform of vocational schools and high schools?

– The reform of vocational schools, or studies, should bring a more rational network and a higher quality form of management, better control of money and higher-quality teachers, a more equitably balanced distribution of the school network, better connectivity with the economy and external evaluations of the results of work through cooperation with the university.

The reform of gymnasium high schools should increase the number of students who will advance from high school profiles to higher education studies, which will end with the leaving exams process. Reform will also, apart from IT directions, bring many optional programmes.

Full membership in the Erasmus+ programme has opened the doors of the EU’s largest educational programme and a fund of 14.7 billion euros to Serbia

What kinds of changes are being introduced to the curriculum and funding method of the Academy of Vocational Studies?

– Important changes are brought in terms of leadership, as we now have the emerging of the roles of manager and academy president. In this way, the director of a vocational school is no longer the last link in the decisionmaking chain. With this, we are preventing that which has to date created many major problems, or rather we’re preventing the mindless spending of state money and unjustified rises in student tuition fees.

Academies will concern themselves more with the needs of the market because they will have to function in accordance with the new Law on the Financing of Higher Education.

We’ve been struggling for a long time with a disorganised market of qualifications. When do you think we will be able to see the first results of the Qualifications Agency?

– The Qualifications Agency was formed within the legal deadline, with selection carried out for its body, director, management, supervisory board and council. Initial funds have been budgeted and the sectoral council is currently being formed. Space has also been allocated for the work of the Agency and it will start functioning within the next few months.

We often say that we need much more entrepreneurial education at all levels of schooling. In your opinion, does that also need to become a separate subject, like computer programming, or to be part of existing contents?

– Entrepreneurial education was introduced to the reformed fifth-grade curriculum through the new subject “Techniques and Technology (with Entrepreneurship)”, with which we changed the existing programme of technical and informatics education.

Through this subject, children learn – amongst other things – about management and entrepreneurship through project tasks. They learn how to progress from an idea to the placement of a product on the market.

This was done because the curriculum for any form of education was already overbooked. This subject will also be introduced to the sixth grade as of next year.

Serbia has become a full member of the Erasmus+ programme.

– Full membership in the Erasmus+ programme has opened the doors of the EU’s largest educational programme and a fund of 14.7 billion euros to Serbia. We were previously partners, but now we have much greater opportunities, because we can be a full partner in projects in which we were previously unable to participate, our institutions can submit a project application and be project initiators and leaders…

Membership has also increased the possibilities for our people to be
trained professionally abroad.

Moreover, now anyone who is in some way engaged in education and work with young people can compete for funding, regardless of whether they are an individual, an educational institution, a non-governmental organisation or an enterprise.

By gaining the status of a full member of the Erasmus+ programme we’ve also taken one of the envisaged steps towards EU membership, within the scope of Negotiation Chapter 26 (Education and Culture).

"Digital literacy is one of the biggest shortcomings in education and lagging in relation to other areas such as medicine and banking. That is why it is essential that the teaching is innovated and that we raise children's skills, and the role of teachers is crucial in that"
Read more

The Government of the Republic of Serbia has included education among its priorities and is very seriously engaged in adapting the education system to...
Read more

Dual education can be a major contributor to sustainable economic growth. The key prerequisite for it to work well is a functioning legal framework,...
Read more

Dual education is one of the key factors for the economic success and competitiveness of Switzerland and the focus of this meeting was on...
Read more