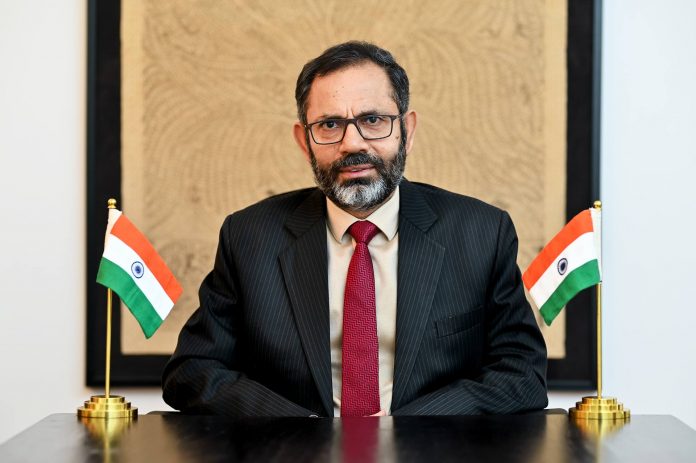 On 30 January 2020, the World Health Organization (WHO) declared Coronavirus/COVID-19 a “Public Health Emergency of International Concern”. This was indeed a matter of great concern to the whole world, particularly to a country like India.
Subrata Batačardžija ambasador

With the second largest population of 1.3 billion and a high population density of over 1200 persons per square mile, India was facing the possibility of grave danger. India reported its first confirmed COVID-19 positive case on 30 January, incidentally on the day WHO declared COVID-19 a public health emergency. But the action for tackling the problem began in India much earlier.

Considering the enormity of the problem, Prime Minister Modi took the lead in directing India’s response to COVID-19. At this point, it will not be out of place to mention that India is a federal country with 28 States, each of which has a separate State Government. Thus, the response of the Government of India needed meticulous coordination with all agencies and every State Government. As soon as the cases of COVID-19 infection started being reported from other parts of the world, India implemented its action plan.

Surveillance at points of entry (airports, major and minor ports, land borders) was initiated on 17 January, a full 13 days before the detection of the first case in India or declaration of COVID-19 a public health emergency by WHO. Screening and graded travel restrictions were increased step by step from mid-January up to 11 March, when WHO finally declared COVID-19 a pandemic.

The unprecedented lockdown included stoppage of over 13,000 railway passenger services a day, for the first time in India’s history as a Republic

Visa and travel restrictions were imposed on foreign nationals on 5 February. All visas were suspended on 11 March and incoming flights were suspended from 19 March. Before that, incoming passengers were placed under daily surveillance through the Integrated Disease Surveillance Programme (IDSP) Network and monitored through a national online portal. 621,000 passengers were monitored this way.

From 22 March, we began phase-in lockdowns, culminating in a full-nationwide lockdown from the night of 24 March. This lockdown was truly unprecedented. It has included, for instance, stoppage of over 13,000 railway passenger services a day, for the first time in India’s history as a Republic. We also stopped all flight services, most public transport and so on. Even WHO has acknowledged that our public health responses were proactive, pre-emptive and graded.

Why did India take such a drastic measure? Statistics given by the experts would explain it clearly. After detection of the first case on 30 January 2020, the number of infected cases in India would have gone up to 8,20,000 by 15 April without the lockdown. However, this has not happened and the lockdown has helped India to contain the infection phenomenally.

On 23 April, the number of infected cases in India is just 21,700, out of which 16,700 are active cases. 4325 people have recovered after initially testing positive, but we have lost 686 lives to COVID-19. Though every human life is invaluable, this seems to be small compared to what could have happened otherwise.

Though the lockdown has been effective in containing the spread of the infection, its economic impact on the country is going to be multi-dimensional. As in most of the countries, unavailability of sufficient essential medical products for fighting the pandemic is a source of concern. Disruption in the global supply chain is affecting the country’s production capacity that needs imported raw materials or intermediate products. At the same time, a lack of transport for shipping goods for export has resulted in the loss of earnings for the companies. With international flights stopped, the hospitality and tourism industry has suffered. On the account of the halt of economic activities, tax collection by Government has slumped. At the same time, there is a greater need for additional expenses for the Government, primarily for supporting the poor, migrant labourers etc. and the need for ensuring the supply of essential goods throughout the country despite the lockdown.

To handle this multi-dimensional problem in an effective manner, Prime Minister Modi initiated a multi-pronged strategy. Government constituted a Group of Ministers, a Committee of Secretaries, eleven Empowered Groups and a National Task Force for this. Prime Minister held video conferences with Chief Ministers of all State Governments to discuss and chalk out a concerted strategy.

Government has also taken the nation-wide initiative to enhance medical preparedness. A network of labs across the country has been set up to facilitate early and timely sample testing. National hospital preparedness is underway to ensure the availability of beds. To increase the availability, innovative steps like converting Railway coaches (currently unused due to lockdown) into isolation wards have been taken. Medical and paramedical personnel and Rapid Response Teams nationwide are receiving orientation on infection prevention, clinical management and protocols. A massive contact tracing and surveillance operation are continuing on a nationwide scale to pre-empt transmission.

Social media platforms and webpages of the Government are pushing out information about basic preventive steps. India has created a mobile app called “Arogya Setu” designed to keep the mobile users informed in case he/she comes close to someone who has tested COVID-19 positive. Movement of migrant labourers caused another problem. Transport was mobilized to safely move them to their home provinces.

Relief camps providing food and shelter were organized on an unprecedented scale within days. More than 27,000 camps were set up to accommodate 1,250,000 individuals. 7,500,000 people are being fed through these network of camps and other 19,460 food camps/distribution points.

The Prime Minister’s Garib Kalyan (Welfare of the Poor) Package sets out the US $ 22 billion to alleviate the situation of the poor and vulnerable, including farmers and labourers. This includes insurance for 220,000 healthcare workers. Food relief measures are being implemented, to provide free foodgrain and lentils for 3 months to 800 million people. LPG cylinders will be provided to 80 million poor households.

The initial lockdown period of 3 weeks was from 24 March to 14 April. Towards the end of this period, Prime Minister held another round of video conference with Chief Ministers of all State Governments. They unanimously decided to extend the lockdown by another 3 weeks, i.e. till 3 May. This was done because the rate of infection has come down. The number of infected cases was initially doubling in three and a half days. This has now increased to ten days. Out of a total of 720 districts in India, 359 districts are now corona free. 294 districts never had any case of infection and in other 65 districts, there is no report of new infection in the past 14 days. Therefore, the second phase of lockdown has relaxed some restrictions on economic activities. Some essential services and smaller business activities are being allowed if maintaining social distancing and segregation amongst the workers/employees.

While fighting the pandemic in India, Prime Minister Modi also said that “COVID-19 does not see race, religion, colour, caste, creed, language or border before striking.” Therefore, India’s response and conduct are attached primarily on unity and brotherhood. Global conflicts are often fought by a group of nations against another group. However, this crisis is to be fought unitedly. For this, Prime Minister Modi held an extraordinary Summit through video conferencing with the leaders of SAARC (South Asian Association for Regional Cooperation) on 15 March.

Prime Minister Modi stated out a series of measures including the US $ 10 million towards the assistance. Prime Minister Modi also took the initiative in a video conference of G-20 leaders. Despite some shortage in the country, India has supplied some medicines and medical products to many countries in its neighbourhood and also in faraway continents.

Incidentally, many foreigners, mostly patients coming for medical treatment from South Asian countries, are currently stranded in India. Our State Governments and local authorities are taking care of them at this hour of need. India will fight this crisis unitedly with other nations and win the battle.

How is India handling COVID-19 crisis

India, a country of 1.3 billion, has been able to limit the number of deaths to less than 200 and active cases to less...
Read more

India: From Importer to Exporter

India’s active pharmaceutical ingredients (API) industry has come a long way since the 1980s when the pharma industry was heavily reliant on API exports...
Read more

H.E. Subrata Bhattacharjee, Ambassador of India to Serbia presented highlights of Economic Survey and Annual Budget for 2020 to senior officials of the Serbian Government,...
Read more

India’s first unesco world heritage city and gujarat’s largest, ahmedabad, is a paradise for tourists. With its elegant monuments, vibrant markets and an eclectic...
Read more

Jan Braathu, a Norwegian career diplomat of ambassador rank, assumed his duties as Head of the OSCE Mission to Serbia on 1 January 2021.  “The...
Read more

Serbia’s total death toll from coronavirus is relatively low, around 3,600, but its rate of fatalities in the medical...
Read more