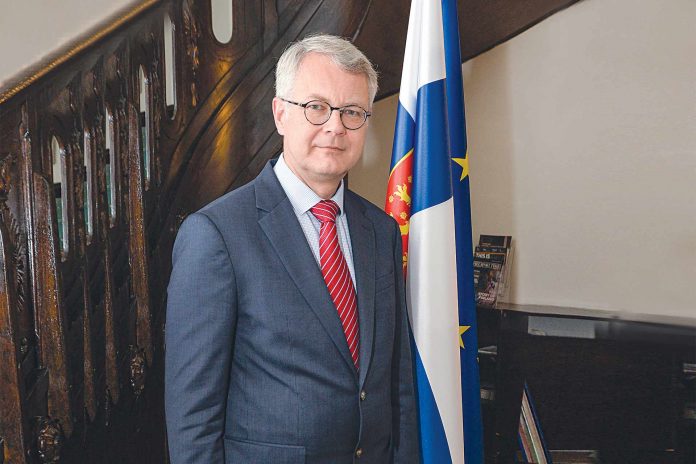 The first coronavirus case in Finland was discovered in January, but the patient was quickly isolated and recovered well.
Kimo Lahdevirt ambasador Finske

The next batches of cases came in February, with travellers returning from abroad. In March, amid the worsening situation, the Government of Finland started to introduce a wide range of recommendations and other measures, mainly in order to prevent overburdening of the healthcare system and especially intensive care facilities.

In addition to recommendations given by the Government, mandatory restrictions are based firstly on the Communicable Diseases Act, updated in 2017. It gives the authorities powers, for example, to track down the cases, to order people to stay in quarantine and to limit the distribution of medicines in exceptional situations.

Another important law is the Emergency Powers Act, which was taken into use on 17 March 2020, for the very first time since the law was enacted in 2011. As it gives the Government powers to limit the constitutional rights of people in a drastic way, all actions proposed by the Government need to be strictly within the provisions of the law and are scrutinized in detail by the Constitutional Committee of the Parliament before being either confirmed or revoked by the Parliament. Actions were taken within days.

Some of the most drastic measures introduced by the Government are the decision to close the borders as well as schools (teaching in classrooms), restaurants, sports facilities and other places where people are in close contact, until 13 May 2020. Congregations of over ten persons are forbidden. The Government also decided to close the borders of Uusimaa Region in Southern Finland to limit the spreading of the disease to other parts of the country. This decision was revoked on 15 April 2020 after it was considered that there weren’t substantial grounds to keep it in force any longer.

We now have about 4,200 confirmed COVID-19 cases in Finland. The number of people hospitalized continued to rise until 9th April, when it peaked with some 260 cases, with about 70 people in intensive care. Since then the numbers have come slightly down and currently, about 200 people have been hospitalized, while some 65 people are in intensive care. So far around 150 (mostly elderly) people have died.

The number of people hospitalized refers only to more severe cases – mild ones are instructed to stay home. Crucial is that during the time of restrictions in place and the epidemic slowing down, Finland has been able to double the number of intensive care places in hospitals from around 260 to around 520 places. Approximately half of these places are available for COVID-19 patients with severe symptoms.

Also in Finland, there have been shortages of surgical masks and other protective equipment. We have discovered that their need had been grossly underestimated in earlier calculations and also that purchases from abroad have been more difficult than thought. Domestic production has been started, but it will still take some time to reach meaningful numbers.

As it seems that the restrictions have been effective in flattening the curve, also in Finland the government is now considering what restrictions could perhaps be lifted and when. On 22 April 2020, the Government confirmed that Finland will continue with a hybrid strategy, combining the gradual lifting of certain restrictions with increasing testing and tracing of infection chains.

However, the Government also decided that events of over 500 people are not allowed until 31 July 2020, and the period after that will be evaluated later. Possible easing of some other restrictions will be decided on 3 May 2020, depending on the situation.

The Government has introduced a wide range of measures to help companies and entrepreneurs. Unemployment and other social benefits will help those who have been laid off or furloughed. It has been estimated that Finland’s gross national product will decrease somewhere between 5 to 13 per cent this year, depending on how long the restrictions will have to stay in place. National debt may increase from about 60 per cent of GNP to at least 80 per cent of GNP.

Some 75% of Finns have said that they are ready to take the vaccine, and that percentage has been growing constantly, as people have...
Read more

What Can Be Learned From Finland

Education System – One of the Best in The World

On the occasion of 102nd anniversary of the Finnish independence, Ambassador Kimmo Lähdevirta and Mrs Pia Kaikonen hosted a reception at the residence. Ambassador of...
Read more