Former Ambassador of Serbia to Morocco, Sladjana Prica Tavciovska, was bestowed with the Order-Grand Cordon-of the Wissam Alaouite at the end of her term, during a ceremony organized by the Embassy of the Kingdom of Morocco in Belgrade.

This ceremony was marked by the presence of several Serbian personalities, in particular, the Minister of Labour, Employment, Veteran and Social Policy, Director of Africa and the Middle East Department at the Ministry of Foreign Affairs, former President of the Parliamentary Friendship Group, President of the Chamber of Commerce of Voivodina, Ambassadors accredited in Belgrade and officials from the cultural and academic fields.

In a speech delivered on this occasion, the Ambassador of the Kingdom of Morocco to Serbia, H.E. Mohammed Amine Belhaj, highlighted that this highest Royal decoration represents a recognition of the significant contribution of the Serbian diplomat in the promotion of closer relations between Morocco and Serbia and also a strong symbol of the excellent relations and the exemplary partnership that the two countries are striving to build together. 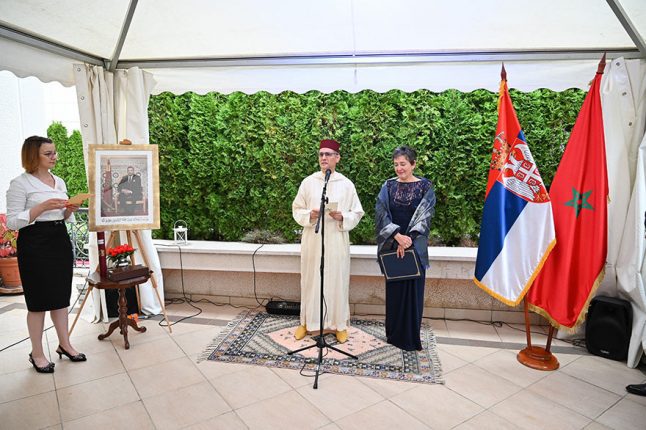 Farewell Lunch In The Honor Of The Ambassador Of Egypt H.E. Amr Aljowaily

H.E Mohammed Amine Belhaj, Ambassador of the Kingdom of Morocco in Serbia, and Dean of the African Group, organized a farewell lunch in the...
Read more

The Kingdom of Morocco celebrates on July 30th, 2021, the 22nd Anniversary of the Enthronement of His Majesty King Mohammed VI. It is also...
Read more

UN Opens Office For Counter-Terrorism And Training In Africa