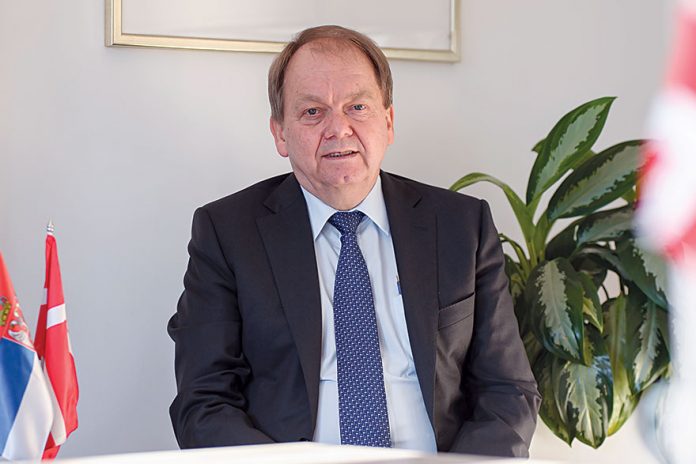 Denmark was the first country in Europe after Italy to announce lockdown. At the time, there were no registered deaths and the number of infected was around 500 in Denmark.

Even though there is reason to be cautious in the coming months, these timely reactions lead to optimism and Denmark’s success in containing the infection at this moment.

First measures to take place were announced on March 11th where students of all educational institutions, as well as school pupils and kindergartners, were sent home. Gatherings of more than 100 people were banned, indoor cultural institutions, libraries, leisure facilities were closed. Going into lockdown also meant that public servants who do not perform critical functions were sent to work from home and private businesses were encouraged to do the same.

As part of the efforts to curb the spread of COVID-19, the government also announced entry restrictions forbidding anyone without a worthy purpose, or Danish citizenship or residence to enter the country. Citizens were also advised against all non-essential travel worldwide on March 13th. Denmark has not, however, locked down for business, and entry restrictions did not prevent export and import to and from other countries.

We see growth in innovation and solidarity in the private sector

The Queen of Denmark, Margrethe II, who does not hold any political power, also held a historic speech, one of the first times ever she addresses Danes over a specific issue, stressing how serious the situation is. She invited Danes to stay at home, and to be there for each other by socially distancing, ‘In the hour of danger, we stand together, it lies deep in us as human beings, it comes naturally to us also in this country. This time, we must demonstrate solidarity by keeping a distance.’

Queen Margrethe II also invited Danes who traditionally send her flowers for her birthday in April, not to send the flowers to her, but to other elderly people going through a difficult and lonely time this year. Thousands of Danes did so, while a sense of solidarity and community spirit came to life in these critical times. All festivities arranged for the Queen’s important 80th birthday on 16 April were cancelled as well, and over 180,000 Danes sang online for her birthday.

A strong welfare state in Denmark, like in other Nordic countries, came to play in these times of crisis, when the Danish response to mitigate the financial impact of the COVID-19 pandemic on 14 March. Danish government issued a tripartite agreement on temporary wage compensation support of companies, workers, self-employed, freelancers. Compensation includes e.g. the government offering to cover 75% of employees’ salaries if they promised not to cut staff.

On the other hand, we see a growth in innovation and solidarity in the private sector with companies assisting in providing medical aid both in Denmark and worldwide. If we take Lego as an example, they have shifted their production and are now producing thousands of protective facial visors for healthcare workers a day! Carlsberg Serbia has also donated 5 million RSD here in Serbia.

Just as Denmark was one of the first to go into lockdown in Europe, it is the first to gradually start to reopen society. Even though Denmark has managed to flatten the curve, steps in reopening the society are controlled and carefully thought through, so the first part of the society to open were daily institutions for younger children on 15 April. Not all schools opened at once, and everyone was given time to prepare for the new way of functioning.

In these times, schools don’t play so much the role of educators but of institutions that prepare children for the new normal ahead of us, but also as care-takers as some of the parents are going back to work. Teachers ensure a safe distance between students while most classes are held outside. Another part of phase one of the reopening is allowing some liberal professions to go back the work, for example, hairdressers, which Danes are pretty happy about. The government takes measures as advised by the health authorities and for them to be effective, every single citizen must assume responsibility to reduce social contact and maintain social distancing and is more important now that the society is slowly reopening.

Phase one is going better than expected and as the prime minister of Denmark confirmed, we are on the right path with things under control. However, we must not unwind, as there is still a second half of the crisis ahead of us in which we must be as vigilant as in the first one.

Denmark will no longer increase oil extraction in the North Sea, after a majority in parliament voted against continuation of the practice. Fossil fuel activities...
Read more

The agri and food industry is a major industrial sector in Denmark. Around 20 % of total industrial turnover still comes from the food...
Read more