Today, the government of the Republic of...
Read more

The European Commission and Austria are announcing...
Read more

Greece has lifted its quarantine requirement for...
Read more

Today, the government of the Republic of Serbia reached an agreement with the representatives of the Association of Freelancers...
Read more

On the Day of Diplomacy, Minister of Foreign Affairs Ivica Dačić presented tennis player Novak Djoković with an award for exceptional personal engagement and contribution to the promotion of the interests of Serbia and its people in the world

Dacic paid tribute to Novak Djokovic for his overall contribution to diplomacy, awarding him an award for exceptional personal engagement and contribution to the promotion of the interests of the Republic of Serbia and its people in the world.

“Today, in accordance with the already established practice, we will award those who have an outstanding personal engagement and contribution in promoting the interests of our country and its citizens in the world. This year, we honour Novak, our celebrated tennis player and a living legend who is perhaps the best ambassadors of our country in the world, as well as Dragan Todorovic, a career diplomat and one of the best ambassadors in our diplomatic service. You will learn more about their merits in the field of diplomacy from the explanations,” said Dacic. 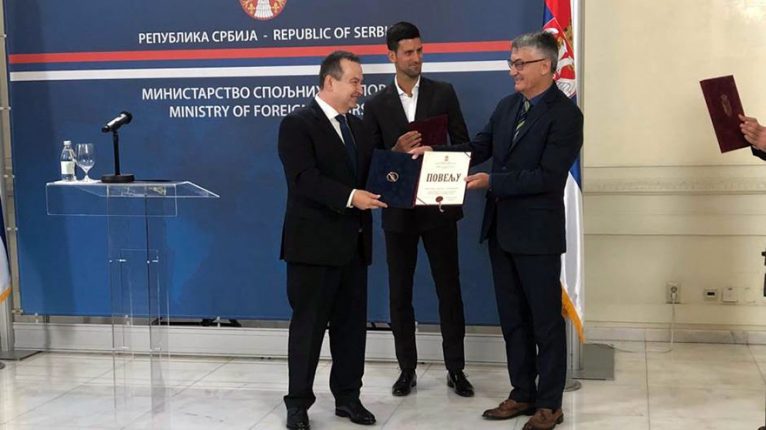 The Day of Diplomacy was established by the decision of the Government from 2015, and May 29 was set as the date of marking the commemoration of the founding of the Prince’s Office of Foreign Affairs in 1839. The establishment of this office is taken as the beginning of professional diplomacy in our country. On that day, the Organization of the Prince’s Office was adopted, on the basis of Article 5 of the “Turkish Constitution” from 1838.

Serbia’s Novak Djokovic reached on Monday the 311th week in a row as the best ranking tennis player on the ATP list ever, surpassing...
Read more

There is a confrontation in Serbia between an organised and arrogant government, on the one side, and a disorganised and imaginary opposition, on the...
Read more
Cord MagazineLeaders Meeting Point