Living in a Dangerous World

We dare say that the Belgrade International Theatre Festival, aka BITEF, is paid the most attention by the public among all the festivals that take place in Serbia. This year, from 13th to 22nd September, it will be held in Belgrade for the 52nd time. During that time, there will be performances of the ten guest plays from Slovenia, France, Serbia, Germany, Croatia, Estonia, Switzerland, Israel and Belgium.

Ivan Medenica, the artistic director and selector of BITEF, brought them all together under the slogan “world without people”, which elicits many associations.

Among many meanings, the slogan of this year’s BITEF – “World Without People” – also has apocalyptic meaning. What prompted you to decide to describe today’s world in such a way?

We live in a world – in Europe and beyond – in which there are ever more authoritarian societies that are only nominally democratically organised (we now call them “illiberal democracies”), in a world of right-wing populism, xenophobia, racism, enormous social inequality and injustice…

On the thematic plan, most of the plays from the main programme of the 52nd BITEF address precisely these problems, and therefore this slogan can be interpreted as “the world without real people” or “the world on the brink of the apocalypse”.

In the dramatic compositions of the 52nd BITEF, that is exactly what happens: the Estonian play with the telling title ‘Filth’ symbolically signifies this apocalypse, after which the thematic focus shifts from social breakdown to existential breakdown, on the theme of death.

The second half of the festival is marked by plays about death, in which not one performer, actor, appears, so the slogan “world without people” has a double meaning…

I don’t think that there’s nothing beautiful and good in our world, that always was and will be, even in times worse than ours, but I think that art should flee to those idyllic, phantasmagoric spaces, to close the eyes, rather it should diagnose problems and provide an alternative.

If nothing else, that alternative can be the theatre universe itself, the exchange of energy and emotions that happens to us in the theatre “now and here”. That’s not escapism; it’s a school of empathy that’s ever less evident in our world.

It’s about installations, forms that connect performers and visual artists, which is widely recognised and acknowledged in the world circles. In our region, however, it is more closely linked to visual arts. We want to show that it legitimately belongs, although no live artist forms its core and theatre art.

According to some other elements, all three installations in the programme of the 52nd BITEF belong to the theatre: they have certain dramatic compositions, a limited time frame, provide viewers with a powerful sensory experience of a specific space and atmosphere…The fact that they’re all productions of theatre houses also isn’t negligible, nor that we’ve decided to show them at BITEF, which is our manifest, and not in museums, galleries or alternative spaces, instead of in theatres.

We don’t want to claim that the art of installations is a “new theatre tendency”, because it isn’t, but it is novel, as a password for modernism, inappropriate for the performing arts’ contemporary world scene.

However, even though they aren’t new, installations are still, especially in our environment, a very “bitef-esque” phenomenon – radical, bold, subversive etc., and it’s primarily because of that that they call into question the necessity for the live presence of performers as the aesthetic basis of theatre.

We’re not advocating for a theatre without actors, performers, instead we merely want to establish that, despite being distinct and marginal, the art of installations also partly belongs to the theatre.

We’re not advocating for a theatre without actors, performers, rather we merely want to establish that, despite being distinct and marginal, the art of installations also partly belongs to the theatre

BITEF exists to launch us into thought and action. Which specific task has it taken on this year?

To reconcile us with the fact that we are living in a troublingly dangerous world, in which a new form of “fascism” is on the rise. It can in no way be compared, in historical categories, with that of the 1930s, but it does have certain structural analogies. It also prompts us to question whether and how theatre and art can counteract such phenomena. It then strives to sensitise us to the phenomenon representing the biggest taboo in our world of eternal youth, beauty and happiness: death.

Last, but not least, is to shake our aesthetic prejudices; to convince us that the concept of theatre is continually expanding and changing and that in it there are also places for the art of installations.

The return of phenomena that characterise fascism is a theme of several plays. What do they have in common and how do they differ?

The majority deal with the rise of right-wing populism today, but with the Slovenian play ‘Odilo. Obscuration. Oratorio’, about the famous Neue Slowenische Kunst movement from the 1980s, Dragan Živadinov turns back to the subject of original Nazism, to warn us of the risk of its vampirism.

Both of Frljić’s plays are aimed at the rise of the right in specific contemporary circumstances, in Germany and Croatia, which they do in their own unique, direct way, whilst at the same time also questioning – which is not the case with other plays – the position of the theatre, its power(lessness) to resist these phenomena.

Frenchman Joris Lacoste’s play Suite No. 3 ‘Europe’ also critically launches the topic of xenophobia, rightist populism and illiberal societies, and in that he does so throughout the EU, although he does with French elegance, humour and sophistication.

You also invited a play with a debutante director – Marina Davydova. Besides her, which other authors is BITEF promoting this year?

Marina Davydova is one of the leading Russian and European theatre critics and festival curators, and this is her first artistic endeavour. Her case confirms that one of the characteristics of contemporary performing arts is the destruction of “professional specialisations”, the problematisation of the notion of the ‘author’: there is increasingly more collective authorship, while theorists, composers and visual artists appear as theatrical creators and the like. This is also the case with BITEF’s other “discovery” this year, Nadav Barnea, an Israeli musician and light designer who is the author of the beautiful installation PA’AM.

The Estonian play comprises the attractive space, primarily, from which it comes. We don’t know anything about this kind of theatre. What will we see? 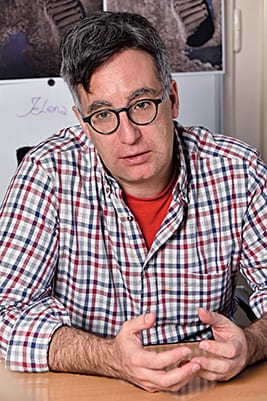 I agree with your claim only partially. The theatre culture of the Baltic countries is among the most developed in Europe, at both BITEF and the Sterijino pozorje festival we’ve had the opportunity to see works by leading Lithuanian (Nekrošius, Tuminas, Koršunovas) and Latvian (Hermanis) directors, but it is true that this is the first guest appearance of an Estonian theatre and artists in Serbia.

However, this is about a directorial tandem and plays that have already achieved considerable international success, as winners of the prestigious Premio Europe: Theatrical Realities award.

One could say in jest that this is “the most bitef-esque” this year: the actors dance in mud, even throwing it at one another, it is only in them that some are stripped naked…

For me, it’s important that the exceptional performance quality of the play – that furious, witty, highly associative dance in the mud – will mitigate the risk of the reading of a literary metaphor in the style “the civilisation is writhing in the mud”.

This year we’ve cooperated with the Goethe Institute, the embassies of Israel and Switzerland, and the French Institute, but I would like to single out in particular, including in terms of the level of assistance, the representatives of the EU in Serbia

From here in Serbia, you invited a play of the National Theatre in Belgrade. What makes it special?

The play ‘Bollywood’, addresses the problems of a contemporary Serbian society in a layered way, ranging from wild privatisation and xenophobia to poverty, while it somehow does that in a seemingly very easy, witty and camp way. It is in this that it differs significantly from what has remained of political theatre in our country, and which is usually always deadly serious, like the screeches of preachers, and fairly artistically dry and/or dull.

Moreover, the play’s director is authoress Maja Pelević, which corresponds with the tendency I mentioned earlier about deconstructing professional specialisations in contemporary artistic performances.

Testifying to the claim that Bitef is one of our cultural diplomats is your cooperation with foreign centres of culture. With whom did you cooperate this year?

Yes, this year we’ve cooperated with the Goethe Institute, and that cooperation is traditionally excellent, the embassies of Israel and Switzerland, and the French Institute, but I would like to single out in particular, including regarding the level of assistance, the representatives of the EU in Serbia.

Their support is even more significant because it came primarily for the play Suite No. 3 ‘Europe’, which critiques the rise of the right in all 28 EU countries. This is also an excellent example of how our country should subsidise the critical culture, that which calls out and question the government itself because that leads to social emancipation.