Courage Is To Work, And Not To Whine

Europa Nosta will next year celebrate the...
Read more

“Bitef wants to save what can be saved, because it was never just an artistic review, but rather also a platform for the social struggle in favour of progressive values, and those are today the most basic, human values: normalcy, goodness, love.”

It was a great honour for me, as Bitef ’s artistic director and the sole representative of the theatre scene, to be invited to meet with French President Emmanuel Macron, and I was very pleased that Macron himself initiated a meeting with stakeholders in the Serbian cultural scene – wrote our interlocutor at the beginning of an article published in Serbian daily Politika.

The presence of Ivan Medenica at such a gathering also testifies to the values of Bitef, which Medenica has led for the last four years, but also, of course, to the position of our interlocutor in domestic and European theatre circles.

The occasion for the interview that follows, however, is a future event: the upcoming 53rd instalment of the Bitef Festival. Providing only the basic information, we will note that from 17th to 26th September there will be performances of 12 plays from all over the world at several locations in Belgrade, unified under the slogan “Let’s Start Love Over”.

This year’s Bitef will be opened and closed by Belgian plays – Orestes in Mosul by the NTGent theatre and Invited by theatre Ultima Vez – while the programme also includes plays from Germany, Nigeria, France, Brazil, Slovenia and Croatia, as well as two from Serbia – Why Does Herr R. Run Amok? by the Yugoslav Drama Theatre and Tartuffe – produced by the Serbian National Theatre in Novi Sad and National Theatre Sombor. Every day of this year’s Bitef will also see the performing of the play Remote Belgrade, by Berlin-based Rimini Protokoll, at various locations across the city.

The message of this year’s Bitef, “Let’s Start Love Over”, is unexpected, because – in this time of hatred and division – one doesn’t even hope for a call to a new beginning that leads to good. It could be said that Bitef is a voice of reason, that it is attempting to save what can be saved. How do the selected plays convey that positive message?

I’m very glad that you’ve recognised how important it is, in our times of social entropy, meaninglessness and cynicism, to be courageous and responsible and, if I may say, for a mature and in no way naïve call for solidarity, exchanges, togetherness… However, of the twelve selected plays, only three – which we, of course, left dramaturgically for the end – can be boiled down to an optimistic perspective (I will explain how they do that in my response to one of the subsequent questions). 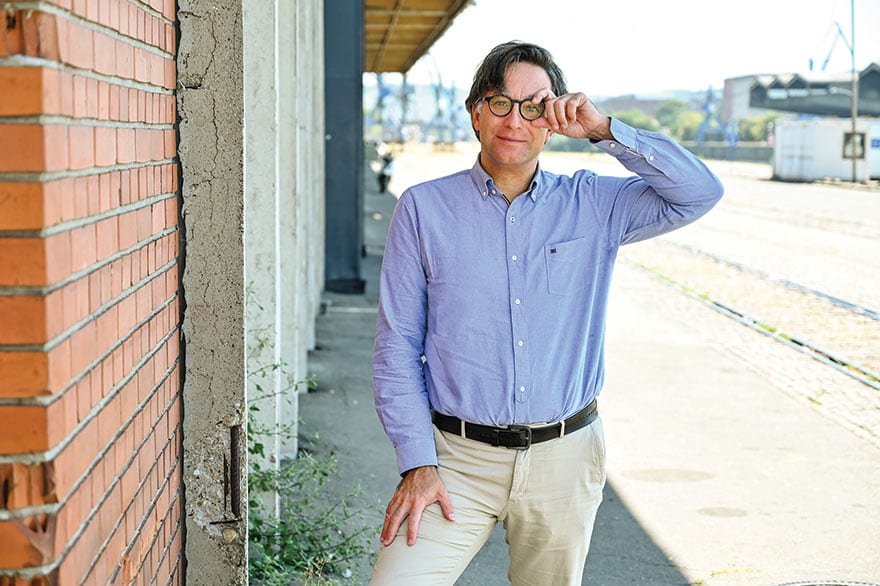 That’s because we don’t want to offer irresponsible and naïve optimism: the other plays treat the crisis in, or total disintegration of, the community in the modern world, from political communities to partnerships. However, as you note, Bitef wants to save what can be saved, for it was never a mere artistic review, also a platform for the social struggle in favour of progressive values, and those are today the most basic, human values: normalcy, goodness, love.

You reserved the play Orestes in Mosul before it was even produced, which supports the prevailing opinion that you have an indescribable instinct for the quality of plays – based, of course, on your experience and knowledge. On what basis did you determine that this play would be a hit?

Thank you for the compliment, but it wouldn’t be fair for me to accept it, or at least not in this form. I can only accept it by recognising it as an acknowledgement of that which I’ve done at Bitef over the last three years, while the fact is that NTGent offered us to work on this project as co-producers. We ultimately opted not to be co-producers, but to reserve the play in advance for the 53rd Bitef (also without having seen it), because it was more favourable financially for us to do so.

The fact that it worked out for us, despite such an arrangement not being in the financial interests of NTGent, is also an acknowledgement of Bitef. Of course, we wouldn’t have “lusted” after the offer simply because it comes from a prestigious partner if we hadn’t first received a synopsis of the project which showed that Rau, along with playwright Stefan Bläske, was devising a very radical adaptation of Orestes, multilayered politically and intellectually, and relevant to our times.

Who is this Orestes who will bring into question today’s understanding of justice and democracy in Mosul? Does this play condemn the Western world?

Milo Rau’s plays usually intertwine fiction with documentary material. Orestes is played by an actor who emigrated to Belgium from one of the Baltic states of the former Soviet Union and who did so, among other things, because he didn’t manage to achieve self-realisation as a gay man in his small community.

In this version of the play Orestes is gay, and his ally in achieving revenge isn’t his sister Electra, but rather his friend Pylades, who is also his lover and is played by an Iraqi actor; their scenes in Mosul were performed (and filmed) on top of a building from which members of the Islamic State members threw their homosexual countrymen into an abyss, to their deaths… That’s just one of many very complex moments of the interweaving of the fiction of Aeschylus and documentary material…

If I have to make a decision on the question you pose, then yes, I think it condemns the Western world. The Democratic Order of the West, the roots of which are celebrated in Aeschylus’ Orestes, has mutated over the centuries into a “merciful angel” who will – for the sake of the fight against undeniable evil like that of the Islamic State – wipe from the face of the Earth a city that emerged on the foundations of one of the world’s oldest civilizations, the Assyrian city of Nineveh…

The main character is not Orestes, but rather Mosul – and the video footage of this devastated city and its inhabitants who are trying to breathe life back into it, and to do so by – among other things – working in ruins to restore the theatre academy whose graduates perform in the play – well, actually only in its filmed part, because they cannot leave Iraq, which is the most upsetting element of the play.

The aesthetic focus of this year’s Bitef is on so-called immersive theatre, which is primarily a new concept for many. What does it mean specifically, and does immersive theatre exist on our scene?

This is about theatre in which the audience participates in the play, in which the boundaries between the stage and the auditorium are erased, in which the reality of the theatre hall plunges into the fictional world of the stage: that kind of theatre of participation has been known to us since at least the historical avant-garde movement of the 1960s. 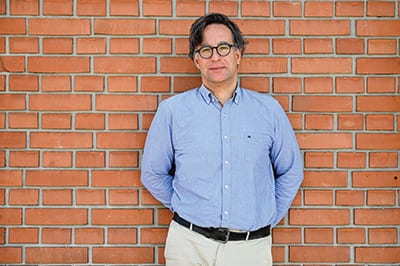 However, what is specific about immersive theatre is that – as French theatre studies professor Patrice Pavis points out – the performers address the viewer as an individual rather than as part of a group, inviting them very gently and carefully to participate, offering them a unique and transformative experience – one that will “reveal the world, people and themselves to them afresh”

Both domestic plays in the main programme – the YDT’s Why Does Herr R. Run Amok? and the SNT in Novi Sad and National Theatre Sombor’s Tartuffe – are immersive in a certain sense, because in them – with the closeness of the stage space and the auditorium, lighting in the hall and direct addressing – the audience is “drawn into” the game, and in such a way that they become passive accomplices to the perishing of the hero.

Is it justified to have the impression that the return of physical theatre to Bitef, which somehow began with your arrival as artistic director, will also be realised this year?

Of the twelve plays in the main programme, three falls under the category of contemporary dance, one is categorised as new circus, and one is installation-performance without a single word, all of which can be unified under the most widely perceived notion of “physical theatre”.

The reason for this is not, among other things, the selector’s preference for physical theatre, but rather its conceptual, curatorial nature. One of the focuses of this year’s Bitef is reconsidering the possibility of theatre as a platform and/ or vehicle for the renewal of the concept of community that has been completely devastated in the modern world. This can be achieved through a narrative, through the discursive affirmation of specific values, such as the triumph of love in the Slovenian play Ali: Fear Eats Your Soul, developed on the basis of Fassbinder’s social melodrama.

I hope that, throughout all these years, Bitef has succeeded, in the local area, in fighting for the equality of various forms of performing arts

However, we consider that theatre has an even more powerful means of affirming togetherness, and that is the performance strategies themselves. What physical theatre offers – especially if, as in the case of Belgian Dance Company Ultima Vez’s play Invited, which represents the conceptual peak of the 53rd Bitef, it is of an immersive nature – is the basis for the renewal of any community. Those are sight, touch, an offered hand, bodily support, exchanges of energy etc.

The other reason for the greater representation of physical theatre is that it will be easier for us to be reached – from significantly different cultures such as those of Nigeria and Brazil – by plays that use the universal language of the body.

Are classic plays in which the actors offer the audience a story retreating in the face of dance and performance? Does Bitef follow this possible tendency?

In world contemporary theatre, all of these tendencies are mixed and equal, though it is a fact that there is ever less classical drama theatre. I hope that, throughout all these years, Bitef has succeeded, in the local area, in fighting for the equality of various forms of performing arts.

Bitef provides an opportunity for the local audience to see the current international scene, but also for foreign guests – which I’m sure will as always, come in large numbers – to see our top plays. With what will we present ourselves to them?

Yes, it looks like there will be more foreign guests, critics, festival selectors, producers and artists this year than during any of the previous editions over the last ten years, which we consider as a major complement to our programme. The application process isn’t over yet, and we already have confirmations from Hungary, Croatia, Slovenia, Romania, Bulgaria, Italy, England, Montenegro, Russia, South Korea, Japan etc.

It has already been noted that our domestic theatre scene will be very representatively presented, with the two aforementioned performances. What is particularly significant is that the plays Why Does Herr R. Run Amok? and Tartuffe is productions of institutional theatres, which shows that in this context “Bitefian” theatre sometimes happens, both artistically and socially – thus, progressive, radical and critically intoned.