Innovative and creative cooperation lies at the core of the new EUNIC Serbia approach to cultural relations and co-operation, addressing open society and youth issues with strategically focused and formatted activities in the new EUNIC GLOBAL strategy period 2016-2019

EUNIC is the network of European national institutes of culture and national bodies engaged in cultural and related activities beyond their national borders. EUNIC brings together organizations from all 28 EU member states and adds value through its network of over 100 clusters worldwide. Primarily, EUNIC promotes cultural diversity and cultural dialogue and advocates for a stronger role for culture in public policies and in external relations, both at European and international level. The EUNIC Serbia Cluster was established in 2007 and has at present 15 members and associate members and several other partner organizations that share knowledge and resources on a common European agenda.

Members of EUNIC Serbia are Austrian Kulturforum, Wallonie-Bruxelles International, Institut français, Goethe-Institut, Hellenic Foundation for Culture, Instituto Cervantes, British Council, and also the Embassy of Finland, Embassy of Hungary, Embassy of the Kingdom of the Netherlands, Embassy of Portugal, and Embassy of Sweden as associate members.

EUNIC is the network of European national institutes of culture and national bodies engaged in cultural and related activities beyond their national borders. EUNIC brings together organizations from all 28 EU member states and adds value through its network of over 100 clusters worldwide

THE IMPORTANCE OF CREATIVITY

Recently, Jean-Baptiste Cuzin, the Director of the French Institute in Serbia and head of cooperation at the French Embassy, was appointed as the new EUNIC Serbia President, and Slavica Marković-Sandić, Communications and Public Diplomacy Officer at the Embassy of Sweden as a Vice-President. Mr Cuzin and Ms Marković-Sandić spoke to CorD about cultural diplomacy strategy for the next three years, priorities, joint cooperation, core values and other issues.

“EUNIC platform for creative exchange and encounter”, a unique EUNIC space for innovative and creative cooperation lies at the core of the new EUNIC Serbia approach to cultural relations and co-operation, addressing open society and youth issues with strategically focused and formatted activities in the new EUNIC GLOBAL strategy period 2016-2019. In the framework of the EUNIC GLOBAL new strategy, EUNIC Serbia will design, implement, and evaluate a platform of creative encounter and exchange, a cultural, educational, and co-operative “FabLab” for “fabulous”, innovative and “outside the box” ideas. 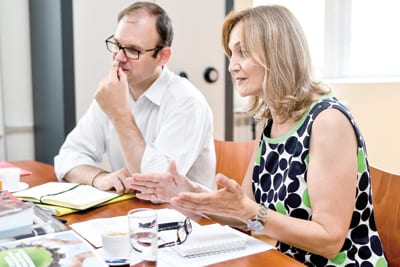 As Mr Cuzin informs us, the strategy to be implemented in Serbia will emphasize unique challenges with which society and culture deal. So far, a paper with key ideas has been adopted and based on that, the strategy will be defined and adopted by the end of the summer.

The EUNIC Serbia creative meeting point is designed to use the potential of cultural relations and co-operation to support Serbia and their political and economic path to EU integration, addressing crosscutting open society issues, and including Serbia into a cultural unity of Europe, its principles and values. European identities and diversity, the autonomy of arts and culture and their institutions, and inclusive approaches allow for new dialogue-oriented formats of participation, exchange, and encounter.

In each of its projects and project partnerships contributing to the “EUNIC platform of creative exchange”, EUNIC Serbia – more often implicitly than explicitly – will follow cross-cutting issues of open society: access to and freedom of information, speech and the media, human rights, gender equality, sustainable development, and the liberty and autonomy of the arts and culture in an open society.

Both our interlocutors agree that open society values and the connectivity of all European societies should be promoted. Also, they are inclined to a non-institutional approach. “European values are not only about open society and human rights but also the promotion of cultural dialogues and establishing bridges in any possible sense,” Cuzin remarks.

In the framework of the EUNIC GLOBAL strategy period from 2016-2019 – EUNIC Serbia will design, implement, and evaluate a platform of creative encounter and exchange, a cultural, educational, and co-operative “FabLab” for “fabulous, innovative and out of the box” ideas

Having in mind that cultural institutes, embassies and partners are differently organized, there are, as Cuzin suggests, different visions regarding cultural diplomacy. In the same way, some institutions are still more committed to traditional visions of nation branding while a new vision is needed. As Ms Marković- Sandić points out, some institutions work only within culture, others include both culture and politics, and there is also a division between cultural diplomacy and public diplomacy. In a word, it is difficult to draw a line.

“It is important to find the red thread that connects what we all are doing. The key is that we all support Serbia on its way to the European Union. Our main goal is to promote the great diversity in culture, language, education in Europe and to enhance collaboration and partnerships between Serbia and EU.”

In terms of strategy, Marković-Sandić and Cuzin agree that there are several challenges for cultural diplomacy of Serbia. The country has always been part of Europe in a geographical, cultural and historical sense. It also has a turbulent history. Today, Serbia is on its way to become a member of the European Union, and the EU is fully supporting Serbia on that path.

“Therefore, the strategy for Serbia will especially take into account activities that can open up important questions and contribute to the establishment of an on-going dialogue about social values. Formats such as creative residencies, creative mentorship programmes, capacity building and training programmes with local and international experts will provide skills, expertise, and networking resources for better cultural project management and international relations,” adds Marković-Sandić.

So far, EUNIC Serbia has successfully cooperated with Mikser Festival and BINA (Belgrade Architectural week). Every year, EUNIC Serbia also participates in activities related to the European Day of Languages. The cluster supports activities outside Belgrade as well, in Novi Sad and Niš in particular.

Cuzin argues that Serbia is more than ever on a crossroads between Eastern and Western Europe, between old and new EU member states, and that cultural work could show that culture is crucial for the cultural identity of the country. Along the same lines, Marković-Sandić recalls the tradition of connecting Serbia with European cultures. She mentions many manifestations, such as the Week of European film that shows that the people in Serbia have always been very interested is in getting to know cultures, heritages and also the contemporary achievements of other European nations.

The conclusion is clear: Serbia and the European Union could and should work together in the field of culture for many reasons. A joint perspective and cooperation will make both sides stronger. This is called cultural “togetherness”.