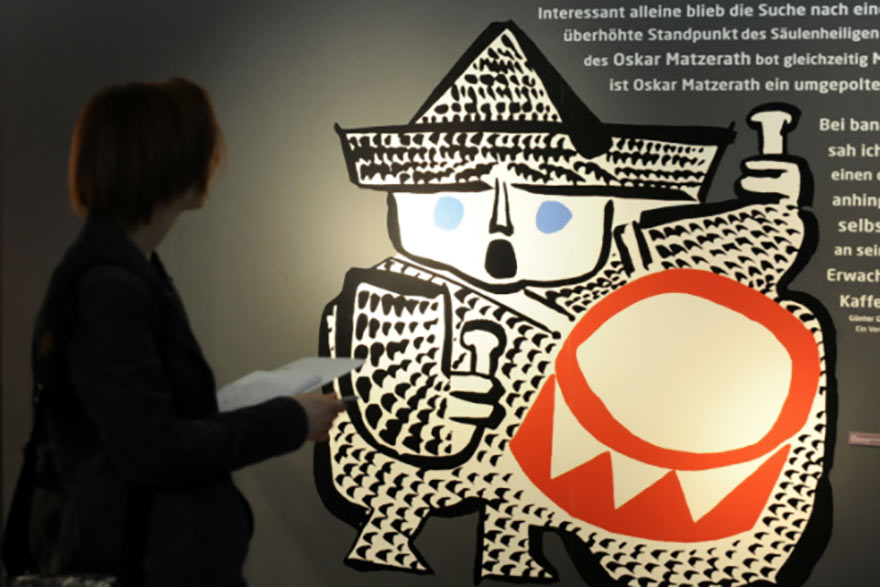 10 German Books You Have To Read Before You Die

These ten novels, ranging from the late 19th century to the last couple of years, are modern German classics. Earning international acclaim, each one is essential reading. This list takes a whistlestop tour through Germany’s most influential books and authors

In Die Blechtrommel, Oskar Matzerath narrates his life story from a mental hospital in the early 1950s.

Born in 1924, Matzerath decided at the age of three to stop growing, retaining the stature of a child whilst having an adult’s capacity for thought. Nobel Prize-winning author Günter Grass’ most famous novel is not the easiest of reads, but it is definitely worth the effort.

The book “most completely defines the [20th century] in all its glories and catastrophes – the moods, atmospheres, manias, streams, currents, histories and under-histories,” writes The Guardian.

But to get a taste of Mann’s writing, Der Tod in Venedig is a good place to start.

Gustav von Aschenbach is a famous writer who takes a summer holiday in Venice. During one dinner, he notices an exceptionally beautiful adolescent boy.

He becomes obsessed from a distance, shutting out the ominous news of a danger spreading through the city.

In the late 1950s, 15-year-old West German Michael Berg finds himself in a passionate but secret love affair with a woman who is over 20 years his senior, leaving him confused yet enthralled.

As a law student several years later, he is observing a trial when he realises that the woman in the dock is his former lover. But the woman on trial is a very different person to the one he thought he knew.

Der Vorleser belongs to the genre of Vergangenheitsbewältigung – a term used to describe post-war attempts to come to terms with the Nazi past – and is one of the best known examples outside of Germany. In 1997 it became the first ever German book to top the New York Times bestseller list, and Kate Winslet won an Oscar for her performance in the 2008 film adaptation.

The book has, however, come in for staunch criticism, as critics claim it encourages identification with the perpetrators of the Holocaust.

One of the most well-known books about the First World War, Remarque’s novel tells the story of German soldier Paul Bäumer, giving a human perspective to the mass of fighting in Europe between 1914 and 1918. Remarque was himself a veteran of the war, and he wrote and published the book a decade after its conclusion.

The novel zooms in to the daily life of an army private, detailing both the violence of battle and the mundaneness of life on the front.

Published in 1929, it quickly received international acclaim, being translated into 22 different languages and selling 2.5 million copies in the first 18 months.

It was also one of the first books banned and burned by the Nazis for being “degenerate.”

Whereas most good novels manage to conjure up images in your head, Das Parfum also conjures up scents and smells that waft up from the page.

Following the journey of a boy with an exquisite sense of smell which drives him to gruesome deeds, Süskind’s novel transports you back to 18th century France, and the sprawling, stinking city of Paris.

When it was published in 1985, Das Parfum shot to the top of the best-seller tables. It stayed on Der Spiegel’s bestseller list for eight consecutive years, also experiencing great success internationally.

You will not regret picking up this gripping yet grotesque read.

W.G. Sebald’s fourth and final novel before his untimely death in a car crash in 2001 is a challenging but unquestionably rewarding book. He lived in southeast England for the majority of his life as a university professor, and the breadth and depth of his knowledge shared in the novel could only be that of an academic.

The novel traces the journey of Jacques Austerlitz, a man who arrived in Britain in 1939 as a young boy from Prague. Through a series of lengthy conversations with the narrator, Austerlitz slowly reveals his life story.

Sebald’s unusual style has been described as its own genre: dense and slightly old-fashioned, it still captivates the reader and leads them on a fascinating journey through the history of Europe.

Franz Kafka was born in 1883 in Prague, now capital of the Czech Republic.

At the time, Prague was part of the Austro-Hungarian Empire, and Kafka wrote in German. He is now regarded as one of the most influential literary figures of the 20th century, and the adjective “Kafkaesque” – meaning nightmarishly complex and oppressive – is taken from the themes of his works.

Die Verwandlung is probably his most famous work, and many are familiar with the bizarre first line: “As Gregor Samsa awoke one morning from uneasy dreams, he found himself transformed in his bed into a gigantic insect-like creature.”

Don’t expect this novella to get any less nightmarish from thereon in.

The year 1929 – when Berlin Alexanderplatz was published – was the highpoint of the Weimar Republic, before it all came tumbling down with the Wall Street Crash. Berlin was like no other city in the late 1920s: diverse, liberal and often debauched.

This iconic novel narrates the story of ex-convict Franz Biberkopf who, after being released from prison in Berlin, swears that he will live an upstanding and decent life. He is soon, however, plunged into the capital’s louche but exhilarating underworld. Döblin’s novel was voted one of “The top 100 books of all time”, on a list compiled in 2002 by The Guardian.

9. IMPERIUM (IMPERIUM: A FICTION OF THE SOUTH SEAS) BY CHRISTIAN KRACHT (2012)

In Imperium, a vegetarian nudist from Nuremberg sets sail for a South Pacific island to set up a religion worshipping coconuts and the sun. Sounds like absurdist fiction? Kracht’s novel Imperium is actually based on a true story.

In this witty and ironic book, Kracht – one of modern German literature’s most elusive figures – tells more than just the surprising yet true story of this extreme figure. He also deals with extremist movements of the 20th century, as well as offering other interesting insights.

Written at the end of the 19th century, Fontane’s novel tells the story of a way of life that was also on its way out, with the unification of Germany and its rapid modernisation.

Effi Briest is a young girl from traditional Prussian noblility, who is married off to a considerably older official. Although a devoted servant to the state, her husband is less loving towards his wife, which leads to great problems.

This poignant work is seen as one of the great German realist masterpieces, and a beautiful yet tragic story of two people caught up in the shackles of society.

The charismatic, near-mythological figure of Josip Broz Tito was many things: an inspirational partisan leader and scourge of the Germans during their occupation of...
Read more

The General in His Labyrinth

The General in his Labyrinth is the compelling tale of Simon Bolivar, a hero who has been forgotten and whose power is fading, retracing...
Read more