It started in 1168 as a celebration of victory of Republic of Venice against Ulrico, Patriarch of Aquileia, and became annual event until it was banned by King of Austria in 1797. It was again reestablished in 1979 and is again held annually. Carnivals in Venice is famous for its masks that everyone wears and are very specific.

Little is known about the reasons for wearing of the masks during the carnival. It could be an act of defiance against one of the most rigid class hierarchical structures in all of history of Europe. First document that mentions use of masks in Venice is from 13th century. It bans masked men to throw eggshells full of rose water from roofs at women on the street. Same document bans masked men from gambling. 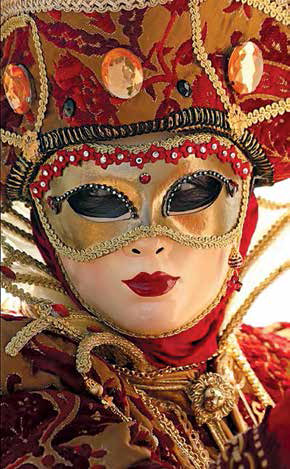 Another law also forbade wearing disguises that are vulgar, visiting convents in those masks, painting faces and wearing false wings and beards. Idea of wearing a mask in Venice was not to hide identity but to hide a class.

Masks that are traditionally used during Venetian Carnival can be divided in to two groups: Commedia dell’ Arte masks and Carnival masks.

Commedia dell’ Arte was a type of improvisational theatre that was popular form the 16th to 18th centuries, but is played even today. Travelling artists and actors would set up a stage and perform juggling acts as well as improvisational plays with rough skeleton of a scenario into which was easy to insert topical themes, which made them very popular. Some Venetian carnival masks are taken from these plays and they carry the names of the characters that wore them. “Arlecchino” is a half-mask with a short, wide nose, arching eyebrows and a bump or a boil on a forehead. “Brighella” is a half-mask too, often painted green with a pointed nose and somber eyes. “Capitan Scaramouche” – also a half-mask that only covers the eyes, white, with a very long nose. “Colombina” half-mask decorated with feathers, silver, and gold. It covers eyes and cheeks. Pierrot is a full mask, white, with vertical lines bellow and above the eyes and a teardrop.

Masks that are traditionally used during Venetian Carnival can be divided in to two groups: Commedia dell’ Arte masks and Carnival masks

Carnival masks have their names too and are more popular. “Bauta” is probably the most famous of masks. It covers the whole face and has no mouth but it has beak-like chin that allows wearer to talk, eat and drink without taking it off. With it goes red or black cloak and a tricorn hat. “Dama” is a full mask of a female face, heavily gilded. “Gatto” is a halfmask in a shape of cat’s head. Cats were rare in Venice and this is probably one of the reasons for choosing that shape for a mask. 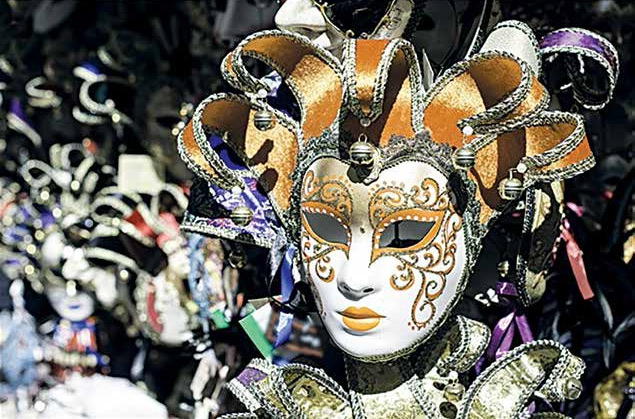 “Dottore Peste” or “Medico della Peste” is a strange looking mask. Venice was a victim of a plague several times in its history. This carnival mask is a copy of a historical masks that were worn by doctors that treated patients that had plague. They were made from leather with a long “beak” in which herbs were placed and had opening for seeing covered with crystals. 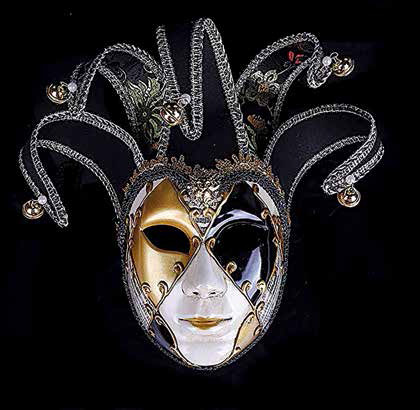 Women, instead, frequently wore a costume called moretta, consisting of a dark velvet mask that was held in place by a button in the mouth. Since the wearer was unable to speak, this mask was also called moretta muta, meaning mute.

Costumes and masks are still the major attraction of the carnival, and Venice becomes the stage of a unique endless parade of traditional 18th century-style masks as well as more original and modern varieties. Visitors are conquered by their charm, and they usually buy a mask as soon as they get in the city, so as to fully feel part of the festival. You can easily get one for even a few euros in any of the small stands or shops that have colonized each corner of the streets. However, in the city center, ancient shops or ateliers still produce masks according to the ancient art. Here, papier-mâché and ribbons have not been replaced by plastic, and each product is a true masterpiece, created with patience and attention to details.

When Carnival was rediscovered back in 1979, teen- Sergio Boldrin and his friends decided to have fun and start creating some mask for this “new” event: this choice led Sergio to become a promoter of the Venetian Carnival

When Carnival was re-discovered back in 1979, teen- Sergio Boldrin and his friends decided to have fun and start creating some mask for this “new” event: this choice led Sergio to become a promoter of the Venetian Carnival and his works to be appreciated and exported worldwide, making him a renown mask artist and a favourite of the movie industry.

Innovative yet faithful to the Venetian When Carnival was rediscovered back in 1979, teen- Sergio Boldrin and his friends decided to have fun and start creating some mask for this “new” event: this choice led Sergio to become a promoter of the Venetian Carnival mask making tradition, Sergio has always opted for papier-mache and entirely handmade processes. The combination of ancient techniques, passion, and his expertise both as a mask maker and a painter, deliver outstanding results that make his crafts truly unique.

Faithful to the Venetian mask making tradition, all Sergio’s masks and decorations are high quality and entirely handmade, going counter trend to what souvenirs shops offer in town.

In a time when mass produced plastic masks are killing the traditions, Sergio chose instead to work even more and to teach his relatives in order to preserve the knowledge of an art that dates back to the13th century.