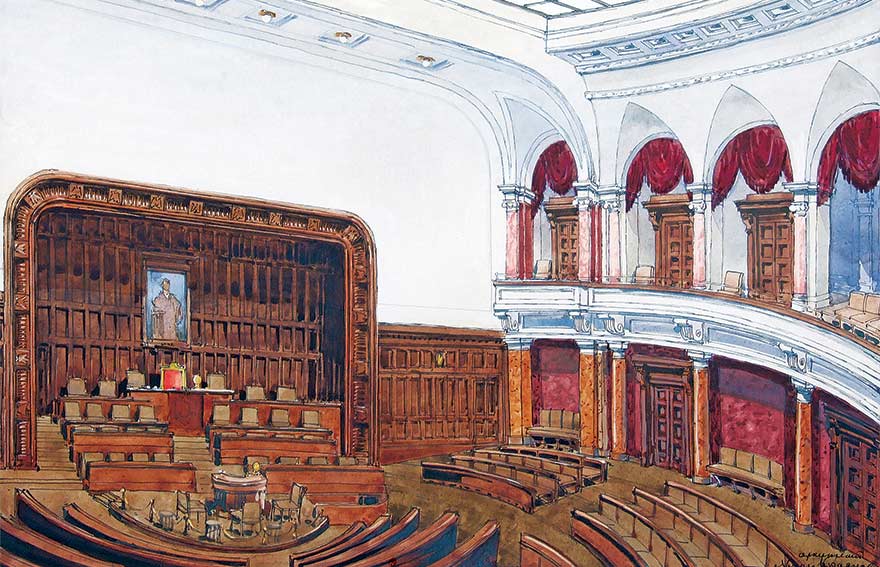 Nikolay Petrovich Krasnov was a Russian architect who left an indelible mark on Serbian culture as a whole, and his author’s stamp is deeply imprinted in the look of the Serbian capital

Nikolay Krasnov is considered the most important representative of academic historicism in Serbian architecture. His signature is carried by almost all of the most impressive, grandiose and monumental buildings in the centre of Belgrade that don’t belong to the category of modern architecture. These edifices are not only symbols of the city of Belgrade, but also of the state of Serbia.

Born in October 1864 in the suburbs of Moscow, Krasnov completed studies in painting, sculpture and architecture in Moscow. After completing his schooling, the state sent him to the Crimea, where he very quickly became the Chief City Architect of Yalta.

Having distinguished himself with his skills in constructing palaces, cutting canals, landscaping coasts and arranging streets, Krasnov attracted the attention of Tsar Nicholas II and received the task of building a summer house for him – Livadia Palace. This building still represents a great tourist attraction, and it has historic significance because it hosted the Crimean Conference of 1945, at which Churchill, Roosevelt and Stalin determined the future destiny of the entire world. Following the construction of this magnificent building, Krasnov became the architect of the Russian imperial court, and two years later he received the title of academic of architecture of the Imperial Academy of Arts in St. Petersburg.

Krasnov was among those who left Russia after the October Revolution. He arrived in Malta, via Turkey and Greece, in 1919. He lived in a refugee camp with his family and supported himself by painting watercolours for private clients for a little money.

It isn’t known how Russian emigrants living Serbia, or in the Kingdom of Serbs, Croats and Slovenes, heard about him, but in 1922 the Association of Russian Engineers and Technicians invited him to Serbia and Krasnov arrived in Belgrade in April of that same year, where he immediately found work at the Ministry of Construction and received an opportunity to demonstrate all of his immeasurable talent. With his works he participated in the birth of the new Belgrade, where he remained resident until his death.

One of the first projects that Krasnov participated in was the reconstruction of Ružica Church on Kalemegdan Fortress. Interestingly, Krasnov is the author of the two statues of Serbian soldiers placed at the entrance to the church, for which this church is known far and wide. One represents a spearman of Emperor Dušan, while the other is an infantryman from the Balkan wars.

This architect is also responsible for today’s appearance of the building of the Ministry of Finance, which was then the State Council of the Kingdom. It was according to Krasnov’s design project that this building was upgraded in 1929, when it gained its present quadrangular shape.

Krasnov also designed the first building in the Balkans to be purposely built to house the national archive. This monumental one-storey building in Karnegijeva Street has retained its original purpose to this day.

Today’s Yugoslav Drama Theatre is located on a site that used to be occupied by the riding academy of the Royal Cavalry Squadron, which was converted into a theatre in 1929, according to Krasnov’s project. Construction of the National Assembly began in 1907, according to the projects of Jovan and Pavle Ilkić, long before Krasnov’s arrival in Serbia. However, various circumstances had led to the construction lasting over 20 years, so projects for the complete interior decoration of the palace, but also the design of details on the facade, a decorative fence, heraldic flags and the pedestal of the mast, were entrusted to Krasnov.

Once a favourite of the Russian crown, Krasnov found fans in the Serbian crown and went on to designed the interior of the Old Palace in Dedinje, but also the decorative plaster on the facade and colonnade between the court and the chapel, while he was also entrusted with the landscaping of the park.

Alongside many other buildings that adorn the city in the area around the confluence of the Sava and the Danube, Krasnov also designed the supporting pillars for King Alexander Karađorđević I Bridge. Unfortunately, this bridge, which many considered the most beautiful structure ever to adorn the Sava, was destroyed by the Yugoslav Army itself, in order to prevent Nazi forces penetrating Belgrade at the start of World Wwar II. It was in 1956 that Branko’s Bridge was built on the pylons of the previous bridge.

Apart from transforming the capital city, Krasnov also gave his personal stamp to many Serbian towns, but also to Serbian holy site beyond the homeland. He worked on the reconstruction of Njegoš Testament Church in Lovćen, on the interior design of the Church of St. George in Oplenac, the cemetery of Serbian soldiers in Thessaloniki’s Zeitenlik and many other projects. Krasnov’s last work was the Memorial and ossuary on the Greek islet of Vido, Corfu, which is ranked among the most mature achievements of Serbian memorial architecture.

This Russian architect was a favourite among his associates in Belgrade. He collaborated with the most important names of Serbian architecture – Petar Popović, Dragutin Maslać, Momir Korunović and Milica Krstić.

Nikolay Petrovich Krasnov, this artist who had marked an entire epoch in the history of Serbia with his work, passed away in Belgrade in December 1939. He was buried on the Russian plot of the New Cemetery in Belgrade. And he also designed his own tombstone.

The international exhibition The Documents of Nikolay Krasnov – the Russian Mason of Serbia was realised in the Archives of Serbia on 4th December 2014, on the occasion marking the anniversary of Krasnov’s birth. Through archival material and original documents, Krasnov’s fruitful architectural work was presented to the professional and general public.

A monument to Nikolay Krasnov was unveiled on Little Tašmajdan on 9th December 2019, on the 80th anniversary of his death, erected in the immediate vicinity of the Archives of Serbia, a building that Krasnov designed. An exhibition about his life and the buildings he designed was prepared in advance of the monument’s unveiling in the ceremonial hall of the Old Palace. And one Belgrade street, in the Vračar neighbourhood near the temple of Saint Sava, is named after him.

If Serbia does not recognise the independence of Kosovo (even discreetly, through a “legally binding paper”) by the end of Angela Merkel’s term as...
Read more

Football Takes Capitalism Out Of Bounds

Last week, Europeans showed the red card to the moguls – and their financiers – who tried to form a Super League of the...
Read more

Diane Coyle, Professor Of Public Policy At The University Of Cambridge

The Dangers Of Data-Based Certainty

Economists are rushing to embrace the use of big data in their research, while many policymakers think artificial intelligence offers scope for greater cost-effectiveness...
Read more

Through Development To A Circular Economy

In the age we live in we’ve become aware of the vital importance of the sustainable development of business operations and the establishing of...
Read more

How Do The Germans Do It?

10 Portuguese Painters You Need To Know About

Portugal has been home to many different styles of art over the centuries. The artists behind these works are still celebrated today, but with...
Read more

Centenary Of The Release Of The First Issue Of “Zenit”

The story of Zenit and Zenitism is a world story - whether people like it or not. And the National Museum of Serbia missed...
Read more

The public policy loans in support of green recovery as well as the support program for the modernization of...
Read more
Cord MagazineLeaders Meeting Point