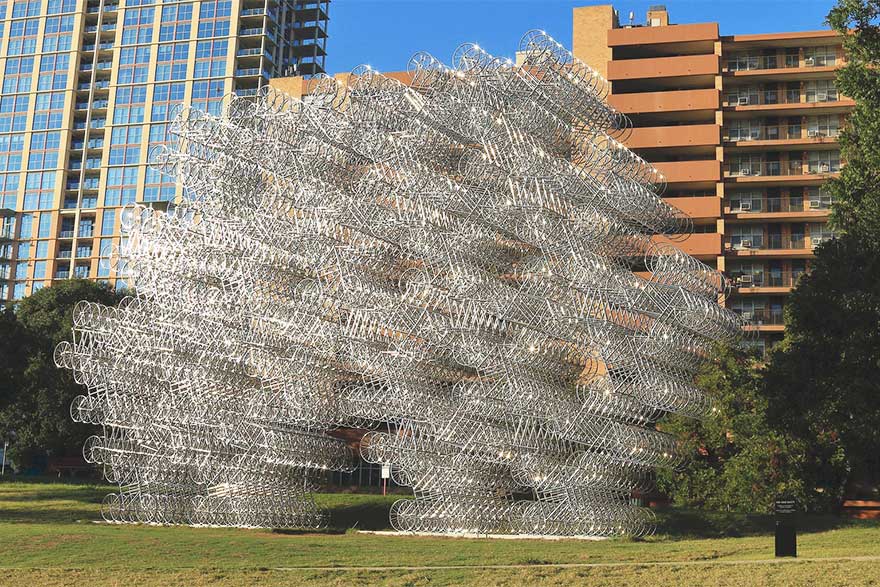 The world’s most powerful public sculptures from Marseilles to Melbourne, Vancouver to New York City

Sometime during the past few centuries, one could argue that the knowledge and appreciation of art surpassed that of religion for the educated classes. Sure, people still associate and practice the many forms: Catholicism, Judaism, Islam, to name a few. But for many more, perhaps, it is art that they look upon religiously.

And while commissioned public artwork has been part of our culture for centuries, it now seems more omnipresent than ever. The meaning, and therefore, impact of a commissioned work can change the fabric of a street corner or city (think of Chicago’s famous Bean or New York’s iconic Knotted Gun). From the bustling streets of major U.S. cities to quieter corners of the globe in Howick, South Africa, and Las Colinas, Texas, Architectural Digest surveys 28 of the world’s most fascinating public sculptures. Each one responds to a cultural curiosity – a question that was asked by a group or city officials and answered by the artists.

1/28 – Once located in Waller Beach at Town Lake Metropolitan Park in Austin was Ai Weiwei’s Forever Bicycles. This 3D sculpture was created from 1,200 bicycles, a vehicle the artist used throughout his childhood in Beijing to move throughout the city.

This work representing childhood and freedom was not destined to stay in Austin forever: It was eventually taken down in May 2017, as the city was no longer able to fund the beloved installation.

2/28 – Completed in 2006, the Singing Ringing Tree is a 10-foot-tall sculpture meant to resemble the shape and grace of an actual tree. The structure, which was designed by artists Mike Tonkin and Anna Liu, was built using galvanized steel, and placed in such a way that when the wind rushes through, a song is produced.

Located in the Pennine hill range overlooking Burnley, England, the sculpture won the National Award of the Royal Institute of British Architects (RIBA) in 2007.

3/28 – Located in New York’s Brooklyn Bridge Park is Bridge Over Tree, a sculptural installation designed by Iranian-born, Minneapolis-based artist Siah Armajani. The work was first shown as a temporary sculpture in Minneapolis in 1970, and was again on view in 2019—for the first time in nearly 50 years. It comprises a 91-foot-long bridge and a set of stairs at the sculpture’s midpoint.

These stairs send visitors up and down over a small evergreen tree. The sculpture was designed to force complete strangers to pass, interact, and cooperate with one another when passing the center of the structure. In a moment of heated political disagreement, finding common ground with any stranger is a welcome change.

4/28 – Brazilian-born Formula 1 race car driver Ayrton Senna was killed during a 1994 race in Italy. His funeral, which took place in São Paulo, is believed to be one of the largest recorded gatherings of mourners: An estimated 3 million people flocked to the streets of Senna’s hometown to pay their respects.

A figure who always seemed larger than life, Senna is now memorialized in a sculpture in Barcelona. Created by British artist Paul Oz, the work of art was unveiled on May 8, 2019, marking the 25th anniversary of Senna’s death.

5/28 – Since 1997, visitors to and residents of Sydney have enjoyed the annual event, Sculpture by the Sea. Located on the famous Bondi beach, the event features 100 sculptures by artists from around the world.

Visitors to the public event will enjoy sculptures similar to the one above: “View TM” is a tongue-in-cheek comment on the vista from the top of a picturesque cliff.

6/28 – Located in central Madrid and designed by the Spanish sculptor Antonio Navarro Santafé, The Statue of the Bear and the Strawberry Tree is a 1967 work that represents Madrid’s coat of arms.

The statue, located in a public square called Puerta del Sol, is made of stone and bronze and stands some 13 feet tall.

7/28 – Located some 25 miles east of Bologna, the Autodromo Internazionale Enzo e Dino Ferrari is a racetrack near the Italian town of Imola.

While the racetrack is known for its many exciting races and the compelling statue outside it (pictured), it’s unfortunately also known as the place where internationally beloved Formula 1 race car driver Ayrton Senna died after a crash during a race.

Made from bronze, stainless steel, and aluminum, Force of Nature depicts Mother Nature hurling the planet in circles. The sculpture seen in the picture is located in London.

9/28 – Designed by the Czech sculptor Jaroslav Róna, Statue of Franz Kafka is based on a scene from Kafka’s first novel, Amerika (1927), in which a political candidate is carried on the shoulders of a giant man during a rally.

Located in Prague, the work of art was completed in 2003.

10/28 – Les Voyageurs, by French artist Bruno Catalano, in Marseilles, France, is an enigmatic sculpture thought to evoke memories and parts of themselves that every traveler inevitably leaves behind when they leave home for a new shore.

11/28 – Created by Can Togay and Gyula Pauer, The Shoes on the Danube Bank in Budapest is a 2005 work that commemorates the hundreds of Hungarians who were ordered to leave their shoes on the bank of the river before they were shot during the Holocaust.

12/28 – First Generation by Chong Fah Cheong, which was commissioned by the Singapore Tourism Board, depicts a spirited group of boys jumping into the Singapore River.

13/28 – Much of the work of Louise Bourgeois (1911–2010) is meant to bring the concepts of jealousy, anger, fear, and her own painful childhood to the public eye. Her sculpture, Maman, is no exception. Located in front of the Guggenheim Museum in Bilbao, Spain, this 30-foot-tall structure shows the strength and fragility associated with maternity.

The terrifying spider is both powerful and tall while balancing on the slenderest of legs, and thus extremely vulnerable.

14/28 – Claes Oldenburg and Coosje van Bruggen’s Spoonbridge and Cherry sculpture at the Minneapolis Sculpture Garden is both playful and beautiful.

15/28 – Designed by the Swedish-born sculptor Claes Oldenburg, the Clothespin sculpture sits near Philadelphia’s City Hall. The work of art was completed in 1976 to celebrate the U.S. bicentennial.

16/28 – Designed by the Hungarian artist Ervin Loránth Hervé, Popped Up is a giant sculpture that appears to be crawling out of the earth. The sculpture is located at Széchenyi Square in Budapest.

17/28 – Nelson Mandela by Marco Cianfanelli. Located near Howick, South Africa, the sculpture was commissioned by Cultural Mechanics, a group that funds cultural projects for governments around the world.

Cianfanelli’s work is positioned along the road where Mandela was captured by apartheid security police in 1962; after his arrest, Mandela spent the next 27 years in prison.

18/28 – Digital Orca by Douglas Coupland. Both beautiful and bizarre, this 2009 work of digital-looking art was commissioned by the city of Vancouver to overlook the harbor and the mountains of Cypress Provincial Park.

Composed of steel armature with aluminum cladding and black and white cubes, the sculpture has become an attraction for tourists and locals alike.

19/28 – Balloon Flower (Red) by Jeff Koons. This public sculpture is set in the shadow of the new World Trade Center in New York City.

The work was commissioned by Larry Silverstein, the businessman who famously signed a lease for the original towers several months before the attacks of 9/11.

20/28 – Mustangs by Robert Glen. This impressive bronze sculpture, which was commissioned by the city of Las Colinas, Texas, depicts nine wild mustangs galloping through a fountain.

21/28 – The Architectural Fragment by Petrus Spronk. Located in Melbourne, this sculpture that’s seemingly buried underground, stands before the State Library of Victoria.

It’s meant to symbolize the downfall of civilization, while alluding to the transience of the present. The city commissioned the work as part of a larger public art project in 1992.

22/28 – Non Violence (also known as The Knotted Gun) by Carl Fredrik Reuterswärd is aptly located next to the United Nations in New York.

The sculpture has come to represent hope for a nonviolent future. The piece—commissioned by Luxembourg as a gift for the U.N.—has been cited as one of the inspirations behind the armsto- art movement.

23/28 – Metalmorphosis by David Černý. Located in Prague, this striking 2014 sculpture is made from stainless-steel layers that rotate 360 degrees, occasionally aligning to create a massive head. ž

24/28 – Freedom Sculpture is a 2001 piece designed by Zenos Frudakis, located in Philadelphia. The 7,000-pound, 20-foot-long bronze piece depicts the struggle involved in breaking free from all that holds us back.

25/28 – Designed by French artist César Baldaccini, Le Pouce is a giant bronze thumb that stands outside of the Centre Pompidou Modern Art Museum, embodying one of his favourite themes, the fantastical representation of humans, animals and insects.

26/28 – Designed by the British-born artist Nic Fiddian-Green, this sculpture of a horse’s head stands some 35 feet tall. Located in West Sussex, England, the imposing figure comes from the ancient Greek figure Artemis. The daughter of Zeus and Leto, Artemis is the goddess of the hunt and of wilderness.

27/28 – Alberta’s Dream, a statue by Spanishborn artist Jaume Plensa, is located in Alberta, Canada. The work of art is highly political, and many seem to have differing views on its true meaning.

Yet that’s what makes Plensa’s work special, as it starts a conversation that might otherwise have not existed.

28/28 – Cloud Gate by Anish Kapoor. This 110-ton elliptical sculpture (also known as the Bean) is located in Millennium Park and reflects Chicago’s famous skyline—as well as visitors as they walk under the 12-foot-high arch. Inspired by liquid mercury, the sculpture measures 66 feet long and 33 feet high.

German architects are very conservative when they are designing new buildings, however in some places where the surrounding area allows them (and, of course,...
Read more