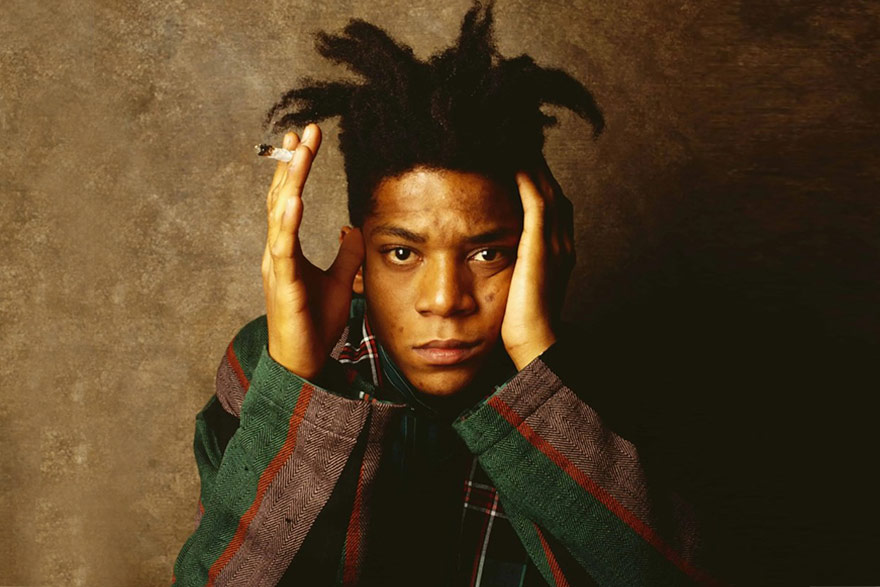 Jean-Michel’s crown has three peaks, for his three royal lineages: the poet, the musician, the great boxing champion. Francesco Clemente

1. Jean-Michel Basquiat was born on 22nd December 1960, in Brooklyn, New York. His father, Gérard, was born in Port au Prince, Haiti, and his mother Matilde was a New York-native of Puerto Rican descent. In this multicultural home, the artist grew up speaking Spanish, French and English.

2. Basquiat became a junior member of the Brooklyn Museum, his favorite museum, at the age of six. In the spring of 2018, the museum hosted One Basquiat an exhibition devoted solely to the artist’s record-breaking Untitled (1982) which was purchased at Sotheby’s by Japanese collector Yusaku Maezawa for $110.5 million dollars — the most ever paid for an American artist at auction.

3. At eight-years-old, Basquiat was hit by a car while playing in the street and suffered a broken arm and severe internal injuries. While he was recuperating, his mother brought him a copy of the foundational medical textbook Gray’s Anatomy. The volume’s detailed anatomical drawings were eye opening to the young artist. Years later Basquiat named his industrial art noise band Gray (which counted actor Vincent Gallo as a member) in homage to this early influence.

4. His father threw him out of the house when he dropped out of school at the age of seventeen. The teenager scraped by – selling sweatshirts and postcards marked with his drawings, panhandling and crashing with friends. His impoverished diet consisted primarily of copious amounts of cheap red wine and 15¢ bags of Cheetos.

5. It was his graffiti tag “SAMO” (shorthand for “same old shit”) that first drew public attention. Basquiat created “SAMO” with his friend Al Diaz while the pair were in high school and the tag,which often featured the copyright symbol, cropped up on buildings throughout lower Manhattan and Brooklyn between 1977 and 1980. “It was supposed to be a logo, like Pepsi.” Basquiat later told writer Anthony Haden-Guest. The end of the collaboration was announced in 1980 through a slue of tags declaring, “SAMO is dead.”

7. The crown, Basquiat’s signature artistic motif, both acknowledged and challenged the history of Western art. By adorning black male figures, including athletes, musicians and writers, with the crown, Basquiat raised these historically disenfranchised artists to royal even saintly stature. “Jean-Michel’s crown has three peaks, for his three royal lineages: the poet, the musician, the great boxing champion,” said his friend artist Francesco Clemente.

“I’m not a real person. I’m a legend.” Jean-Michel Basquiat

9. He produced a rap record with Rammellzee and K Robb titled Beat Bop (1983) and designed the cover for the single.

10. The limelight suited Basquiat. In 1980 he appeared in music video for Blondie’s song “Rapture.” It was lead singer Debbie Harry and her boyfriend Chris Stein who bought Basquiat’s first painting for a mere $200.

12. Along with Julian Schnabel, Kenny Scarf and Francesco Clemente, Basquiat was considered one of the leading figures of Neo-Expressionism, an art movement that reasserted the primacy of the human figure in contemporary art. In 1996 fellow Neo-Expressionist Schnabel directed a biopic of the artist’s tumultuous life with Jeffrey Wright starring as Basquiat and David Bowie as Warhol.

13. In 1982, at the age of 21, he became the youngest artist to ever exhibit at Documenta in Kassel, Germany, when nearly 60 of his paintings were featured at the esteemed exhibition

14. He joined the Annina Nosei gallery in 1982, and had his first American one-man show in the spring of that same year. By 1984, Basquiat had left Annina Nosei for 1980s art-world powerhouse Mary Boone.

15. He met his lifelong friend and mentor Andy Warhol in 1981 at late-night hotspot Mr. Chow’s. Swiss dealer Bruno Bischofberger later suggested the two collaborate on a series of paintings, and between 1983 and 1985 the pair made works that layered Basquiat’s virtuosic graffiti scrawl over Warhol’s bright Pop imagery.

16. Madonna and Basquiat dated in 1982, while both were on the precipice of mainstream stardom.

17. That same year, Basquiat moved to Los Angeles where he lived with the gallerist Larry Gagosian as he prepared for an upcoming solo show at the gallery’s West Coast location. Madonna even joined them for a few months.

18. With newfound commercial success he spent lavish amounts of money on Armani suits, expensive wines and the finest hotels. “From being so critical of the art scene, Jean-Michel was all of a sudden becoming the thing he criticized,” said Keith Haring, his longtime friend. But his libertine squanderings were marked by irreverence — he was know for painting over his designer suits, lending obscene sums of money, even throwing $100 dollar bills out of his limousine window to panhandlers.

19. Both the Museum of Modern Art and the Whitney Museum of American Art rejected submissions of his work.

Basquiat died of an accidental drug overdose on 12th August, 1988, at his Great Jones Street studio. He was 27 years old. In the months preceding his death, the troubled artist claimed to be using a hundred bags of heroin a day. Curator and gallerist Jeffrey Deitch delivered a eulogy during his burial at Green-Wood Cemetery in Brooklyn.

21. “I’m not a real person. I’m a legend,” Basquiat once claimed. His name and unique personal style have become frequent reference points in popular culture. Fellow Brooklyn-native Jay-Z, for instance, famously paralleled himself to the artist in his 2013 song”Picasso Baby,” saying ”It ain’t hard to tell, I’m the new Jean-Michel.”

Michelangelo Drawing Discovered In 2019 To Be Auctioned

Christie's auction house has announced that a Michelangelo sketch found in 2019 will be auctioned in Paris on 18 May 2022. They estimate that...
Read more

While she may be best known for her country crooning, her investment in Dollywood has helped her become one of the richest musicians in...
Read more

Actress Of The Century

“Acting, for me, is a joy and the power to relay various lives through myself,” says dramatic artist Mira Banjac, noting that she’s proud...
Read more

10 Things We Learned From The Beatles: Get Back

Peter Jackson’s eight-hour documentary on the Fab Four reveals Ringo is an amazing drummer, McCartney was a joy and their entourage were coolest of...
Read more

WINTER SCENE ON A FROZEN CANAL BY HENDRICK AVERCAMP (1620) He’s not as famous as Rembrandt or Vermeer, but no painter of the Dutch...
Read more

Damon Albarn has revealed that he once considered pursuing a political career but was put off after a meeting with Tony Blair. The Blur and Gorillaz frontman recalled a conversation...
Read more

The Most Influential Political Cartoons Of All Time

While the caricature may not always be taken seriously as a medium, the political cartoons featured here have had the power to inspire, outrage...
Read more

The Cannes Film Festival opened up Tuesday with crowded red carpet arrivals, a star-studded ceremony and a call from Ukraine President Volodymyr Zelenskiy for...
Read more

Business Inspiration Behind The Scenes

Businesses these days, particularly those who make their money on the internet, seem to be paying much more attention to their staff and work...
Read more