Education: Industry Made For Growing

The U.S. Department of Education lists more than 4,000 degree-granting academic institutions. Overall, the number of colleges in the U.S. is shrinking, particularly in the for-profit sector. When it comes to determining how many universities are in the U.S., it’s a number in flux.

The short answer: There were 4,298 degree-granting postsecondary institutions in the U.S. as of the 2017- 2018 school year, according to the National Center for Education Statistics.

The long answer: It depends on how university branch campuses are counted, as numerous institutions have opened satellite locations. The number also is subject to change in a higher education landscape that has experienced numerous recent college closures and mergers.

Education is “like any industry, in the sense that you’ve got activity with firms growing, opening, closing, changing, merging continually,” says Guilbert C. Hentschke, Dean Emeritus at the University of Southern California Rossier School of Education.

Though the U.S. Department of Education tallies more than 4,000 colleges and universities, U.S. News ranks only around 1,400 schools. To be eligible for inclusion in the Best Colleges rankings, a school must be regionally accredited and offer four-year undergraduate degree programs. Colleges that offer only associate degrees are not ranked, nor are schools with a student body of fewer than 200.

Of the 4,298 institutions listed by NCES, there were 1,626 public colleges, 1,687 private non-profit schools and 985 for-profit schools in 2017. The data divides the institutions into categories such as four-year colleges and universities and two-year schools, often known as community colleges.

Overall, the number of colleges in the U.S. is shrinking, particularly in the for-profit sector.

“Colleges are closing because they are struggling financially. Many for-profits closed because their enrollment fell off substantially in large part due to adverse publicity, challenges with their students getting financial aid and challenges that the (federal government) posed,” Lucie Lapovsky, principal at Florida-based Lapovsky Consulting and former president of Mercy College in New York, wrote in an email. She references stricter regulations on the forprofit sector as one contributing factor.

While for-profit academic institutions have struggled in recent years with many closings, so too have small liberal arts colleges.

“Among the private colleges, those most susceptible to closing are the 800 private colleges with an enrolment of (fewer) than 1,000 students. Schools that are small, schools that are almost entirely dependent on student revenues” Lapovsky says, adding that vulnerable institutions are threatened by the lack of other non-tuition funding streams flowing into those schools.

Hentschke notes that there are many factors in play when it comes to college closures.

“It’s a combination of size, market location, market recognition and a brand that can either keep you afloat or conspire against you,” Despite market shifts, he notes the number of schools that close or merge is “relatively small in a given year.”

“You look across all institutions and that number is going down, not up,” Hentschke says.

With more than 4,000 schools or additional branch campuses to choose from, students have an abundance of undergraduate degree options available, whether they are seeking an education at a research-oriented university, a small liberal arts college or a trade school.

That number can be overwhelming and “stress-inducing for students,” says Kelly Fraser, owner and principal consultant at Green Apple College Guidance & Education. To help trim those options, she advises students to develop criteria to determine what matters most and then find colleges that best align with those academic priorities.

“It really depends on what’s important to them,” Fraser says, noting that it may be location, academic programs, or other factors.

Of the 4,298 institutions listed by NCES, there were 1,626 public colleges, 1,687 private non-profit schools and 985 for-profit schools in 2017. The data divides the institutions into categories such as four-year colleges and universities and two-year schools, often known as community colleges

To get a feel for a college, prospective undergraduate students are advised to visit and familiarize themselves with the campus and degree programs and “talk to professors while they’re on campus, talk to students and alumni. It’s really about being a good consumer.”

While students living in the U.S. may be able to take numerous college tours, that can be more difficult for international applicants. To bridge that divide, students overseas often turn to free resources, such as EducationUSA, a network of advising centres supported by the U.S. Department of State, or to paid consultants, such as Mandee Heller Adler, founder and president of International College Counselors based in Florida. “It’s just a very overwhelming process for a child in another country to know what to do,” Adler says.

One difference, experts say, is that universities offer both undergraduate and graduate programs, while many colleges focus solely on undergrads.

The difference between a college and a university in the U.S. may not always be apparent to students who grew up in other parts of the world. The word “college” doesn’t have the same meaning in every country, which can create confusion for prospective international students interested in studying in the U.S.

“In Spanish, ‘colegio’ means high school,” says George DaPonte, director of international admissions at the University of Tampa in Florida, citing one example. 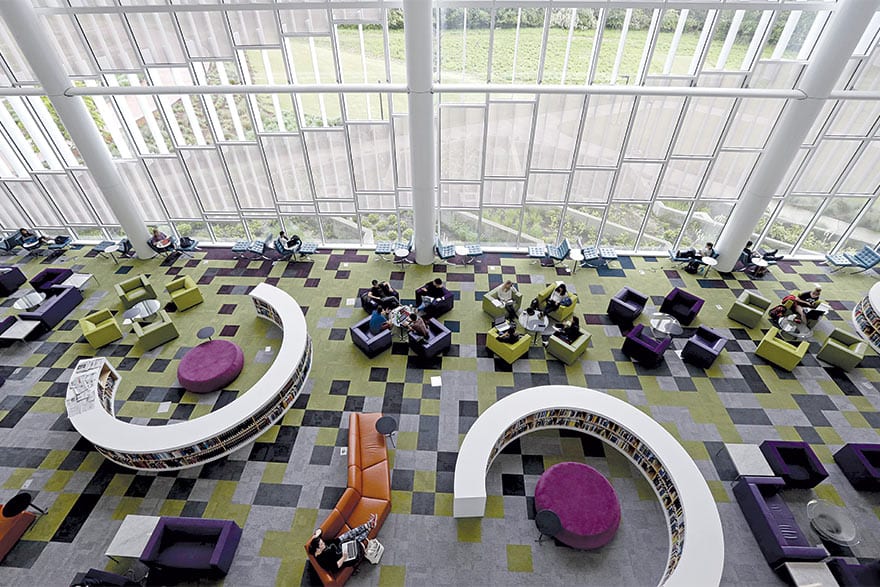 For this and other reasons, some prospective students may pass over U.S. schools that have “college” instead of “university” in their name, admissions experts say. By doing so, students could miss out on a school that may have been a good fit.

While some four-year postsecondary institutions in the U.S. have “college” in their name and others have “university,” both grant undergraduate degrees. Here are some things to keep in mind when researching U.S. institutions that call themselves colleges and those that identify as universities.

WHAT IS A COLLEGE?

Often, schools with “college” in their name are smaller institutions that emphasize undergraduate education, Johanna Fishbein, head of the university advising at the United World College of South East Asia’s Dover Campus, an international school, said by email. This is not a strict rule since there are a number of exceptions.

Some colleges, known as liberal arts colleges, give students an education in a broad range of academic areas as opposed to having them specialize early in one particular subject.

Prospective students may also sometimes mistakenly believe liberal arts institutions only focus on the humanities, admissions experts say. But many of these schools offer degrees in science fields too.

“Colleges are closing because they are struggling financially. Many for-profits closed because their enrolment fell off substantially in large part due to adverse publicity, challenges with their students getting financial aid and challenges that the (federal government) posed,”

Another common misconception is that schools with “college” in their name don’t offer much in the way of research opportunities, said Fishbein, who serves as president of the International Association for College Admission Counseling. But, for example, 65% of Franklin and Marshall students participate in research before they graduate, Mankus says.

Another type of school in the U.S. with “college” in its name is a community college. These are two-year schools that grant associate degrees and career-related certificates. Community colleges vary in enrolment size – some are large, despite having “college” in their name.

Some students begin their education at a community college and then transfer to a four-year college or university to complete a bachelor’s degree.

WHAT IS A UNIVERSITY?

Many schools with “university” in their name are larger institutions that offer a variety of both undergraduate and graduate degree programs. Public universities are some of the most sizable schools, sometimes enrolling tens of thousands of students. These schools are also highly committed to producing research.

But it is a misconception that all schools with “university” in their name are big, says Chelsea Keeney, assistant director of international student recruitment at the University of Minnesota— Twin Cities.

Some are relatively small, such as Marymount California University, which had a total enrollment of 985 students in fall 2016, per U.S. News data.

Also, not all universities are public. Private universities include, among many institutions, some of the Ivy League schools, like Princeton University.

Sometimes adding to the confusion for international students, Keeney says, is the fact that large universities are often made up of smaller divisions called colleges. Each of these colleges has a specific academic focus, such as business, engineering or social work.

And the liberal arts-type study is not exclusive to small colleges. Some, but not all, universities have a core curriculum for undergraduates, meaning students take a variety of general education courses before focusing on their major.