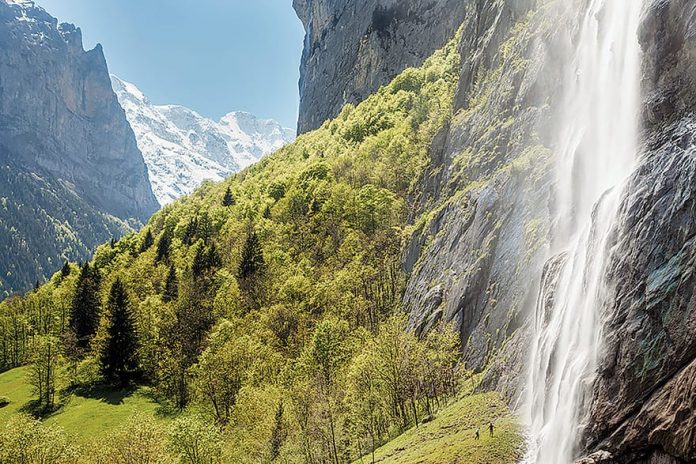 The waterfalls of Switzerland have attracted visitors and inspired poets over the years – and still today are a marketing boon.

“The soul of man is like water. It comes from heaven and rises again to heaven,” wrote Germany’s greatest poet, Goethe, after watching the play of wind and water at the valley’s best-known landmark, the Staubbach Falls. Byron described the same falls as “like the tail of the pale horse ridden by Death in the Apocalypse.”

The falls get their name from the spray – like dust, or “Staub” – whirled by the wind. Like Goethe and Byron, countless tourists have watched the stream turn into “waves of cloud” as it hits the rock. Sparkling, towering, thundering, subterranean – Switzerland’s waterfalls are as varied as they are thrilling.

With a height of nearly 300 metres, Staubbach Falls is one of the highest waterfalls in Switzerland; dropping into the Lütschine River. It is an extremely stunning waterfall located above the scenic village of Lauterbrunnen in the Bernese Oberland. Staubbach Falls is one of 72 waterfalls in the Lauterbrunnen valley and well worth the steep, short walk up the pathway for a spectacular view behind the falls.

Engstligen is the second largest waterfall in Switzerland, and under preservation since 1948. The waterfall is formed from the joining of several streams in Engstligenalp, falling down 600 metres of rocks, officially becoming the Engstlige river. The waterfall can be seen up close from a rocky path, or from above if you take the cable car outside the village of Adelboden. At the top, there is a flat, circular trail which begins close to the mountain station.

Reichenbach Falls is famous as the place where Sherlock Holmes fell to his ‘death,’ but the falls were famous in Europe long before that. The Reichenbach Falls are a series of waterfalls on the Reichenbach Stream in the Bernese Oberland region of Switzerland near Meiringen and have a total drop of 250 metres. You can walk along the trail through the falls or take the funicular to a viewpoint where you will be rewarded with wonderful views of the waterfall and the Hasli valley.

The Trümmelbach Falls are Europe’s largest subterranean waterfalls. They carry meltwater from the glaciers of the Jungfrau mountains down to the Lauterbrunnen Valley – carrying up to 20,000 litres of water per second. This ten-tiered waterfall cuts its way through the mountain, making it one of the most unique waterfall experiences. In order to see the waterfalls, you have to pay a small entrance fee to take the lift to the top and from there you can walk through a series of stairs and tunnels to viewing platforms. The underground parts of the falls are also illuminated, which results in one of the most striking sights in Switzerland.

The Rosenlaui glacier gorge is located near the quiet mountain hamlet of Schwarzwaldalp, not too far from the town of Meiringen. As you enter the Gletscherschlucht, you will first notice the powerful Rosenlaui waterfall that carries the waters of the Rosenlaui Glacier through this ravine. There is a footpath ascending through the narrow ravine, which is surrounded by up to 80-metre cliff walls. At the end of the gorge, a forest trail will lead you back down to the entry point.

Foroglio Waterfall is a remarkable waterfall tumbling down a 80-metre high rock into the Val Calnegia valley, which can be reached from the charming town of Foroglio which is located in the Ticino region of Switzerland. An information trail begins in the villages of Cavergno and Bignasco and takes walkers in a number of stages along the floor of the valley to the Terra di Foroglio, to Pontido and through the Calneggia Valley to alpine meadows at heights of over 2000 metres.

The Mürrenbachfall is located just outside Lauterbrunnen towards Stechelberg and is the most visually stunning waterfall in the valley. The waterfall crashes to the ground from the 417-metre-high Mürrenfluh in five cascades, making this Switzerland’s highest waterfall. The most direct views of Mürrenbach Falls are from the Schilthornbahn cable car station. The waterfall flows year-round but is the most prominent following spring melts.

Giessbach Fall tumbles in 14 stages, over a length of 500 metres down to Lake Brienz near the town of Interlaken in the Bernese Oberland region of Switzerland. The waterfall is surrounded by mountains, forests and alpine meadows with breathtaking views of the pristine Lake Brienz. It is recommended to take the funicular up, walk the loop behind the falls, check out the historic Giessbach hotel, and then walk back down to the boat dock back on Lake Brienz.

The Rhine Falls, the largest waterfall in Europe, is only about 45 minutes north of Zurich near the town of Schaffhausen. There are several viewing platforms on both sides of the falls, as well as on the mighty rock that stands tall in the middle of the falls. You can even take a boat that will drop you off on the rock or take you to the other side, making it possible to make a circular route around the falls.

Tine Conflens is an impressive waterfall where the Veyron and the Venoge rivers meet and is surrounded by breathtaking scenery. These tumultuous waters have shaped gorges and canyons into the limestone creating a magnificent rocky hollow. To reach the falls, take the train from Lausanne to La Sarraz. It is about a 40-minute walk to these waterfalls in the village of Ferreyres. You may also want to consider hiking on to Romainmôtier through the Nozon Gorge.