We justifiably expected tangible support from the Government of Serbia and we received it in the greatest volume. However, some of our members require specific assistance measures and the SBC will advocate for such measures in its contacts with the government.

“We can hardly wait to again start organising events as we’ve done over the previous 17 years,” says Danijela Fišakov, president of the Slovenian Business Club.

Despite the fact that there won’t be a return to the pleasant atmosphere of joint SBC gatherings prior to September, both the Club and its members have coped well in the newly emerged circumstances of online work and, above all, protecting the health of employees. Moreover, in these times of trouble, friendships have been strengthened and ties between members and friendly chambers have been fortified.

How have your members coped with the pandemic?

– When a state of emergency was declared in Serbia, our members first prescribed measures relating to the health and safety of employees and then implemented those measures consistently. The result of the implementation of those measures is that none of our member companies became a hotbed of infection. That was the top priority for everyone, and that fact deserves to be specially emphasised. Work from home for employees was organised by all those whose organisation of work processes enabled that. I am most proud of the fact that great solidarity has been present among members and could clearly be felt. The members kept up to date with exchanging information and experiences, both mutually and via the SBC, thus helping each other to overcome the newly emerged problems.

How effective and timely were the Serbian Government’s measures for helping the economy?

– As soon as the newly emerged crisis became evident, the Slovenian Business Club, together with other economic and business associations, chambers, societies and clubs, addressed the Ministry of Finance – on behalf of all business people in the Republic of Serbia – with a joint request to ease the operations of companies during the state of emergency by reducing some obligations and postponing others. We justifiably expected tangible support from the Government of Serbia and the Government adopted our suggestions to the greatest extent. It grouped the measures it would take in nine points and began implementing them consistently, as announced. 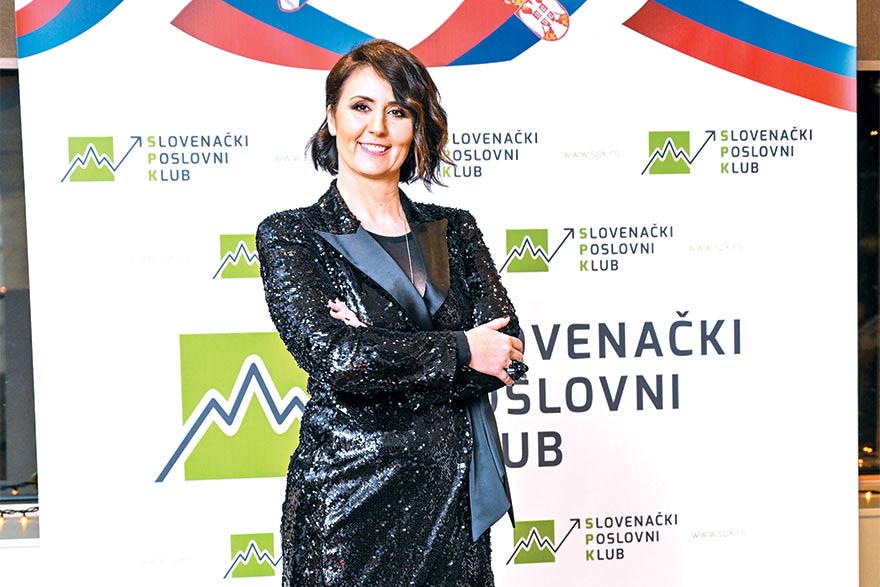 The government’s measures taken during the state of emergency significantly eased business operations, primarily micro-businesses and SMEs, i.e. those that are the most vulnerable in such situations. Business leaders assess these economic intervention measures as being excellent for alleviating the first shock. However, they are linear and relate to the broadest set of economic entities. Some of these businesses have nonetheless been hit by additional specific problems as a result of the pandemic. The Slovenian Business Club is already doing, and will in the future continue to do, everything it can to help its members overcome these problems. In this sense, the SBC is already insisting on some additional and specific measures with the Serbian authorities.

How was your cooperation with the Government of Serbian and other chambers in the previous period? Were you able to provide members with precise interpretations of the measures introduced and to obtain the necessary permits?

– I can only praise the work of state services during the state of emergency, and especially the Chamber of Commerce & Industry of Serbia, which provided real support to companies and business associations the whole time. The information we received from state institutions was always clear, timely and useful.

I am proud of the solidarity between members, who exchanged information and experiences with each other and via the SBC, thus helping each other to overcome the newly emerged problems

The good relations we’ve nurtured over many years with other foreign chambers and clubs came even more to the fore in this situation, because we all shared information and helped each other. In times of trouble, one recognises true friends, and this period showed that the SBC has many of them.

What do your members now expect from the Government of Serbia? Which second phase measures would be the most important for the recovery of economic activities?

– Our members, primarily and without exception, expect a continuation of the dialogue between the business community and the Government, and then also concrete moves of the Government that would further stimulate economic recovery. Of course, business people are aware that they must be rational in their demands and expectations. It is clear to them that the Government can intervene and relinquish part of its income only as much as the budget allows, and that the economy is actually the factor that contributes the most to that budget being filled. With the aim of overcoming the situation as completely as possible and alleviating the difficulties, it has caused, the business community and the Government must – as in all other life situations – find the right measure in this and complement each other and cooperate mutually.

On which issues have you cooperated the most with the Embassy of Slovenia?

– Given that in recent months there have, understandably, been no activities related to new investment projects in any of our countries, we cooperated the most with the consular department of the Embassy of Slovenia, or Consul Mr Primož Križaj, on the solving of problems related to the departures of employees in our member companies from Serbia and their arrivals in Serbia.

Unfortunately, Slovenia hasn’t had an ambassador in Serbia for half a year already, which was contributed to additionally by the Coronavirus outbreak. We hope that the newly appointed ambassador will soon begin his term in Serbia; that the newly emerged situation will not deepen and that cooperation between the Slovenian Business Club and the Embassy of Slovenia will continue along the upward trajectory that it was on during the terms of previous ambassadors.

How have you adapted the SBC’s activities to the new conditions of communications and operations? Which topics will be in your focus?

– First of all, the most important thing in this situation was for us all to stay healthy. Only a healthy person can work, love, and even argue, engage in conflict etc. In accordance with the instructions of the medical profession and the orders of the authorities of the Republic of Serbia, the activities of the SBC have been adjusted, or slightly amended, since the beginning of the state of emergency. We temporarily halted the organising of events and meetings requiring the physical presence of participants. This activity will continue in September. And even before this crisis, the SBC had already adjusted many of its activities to the standards of Industry 4.0.

We were already working from home when needed, were personally available over the telephone for at least eight hours every day and utilised social networks and email intensively. And now, as in regular situations, we regularly monitor all relevant content and information and inform the membership about them in a timely manner. What’s new is that we additionally organise webinars and internet conferences covering current topics, in order to remain in interactive contact even in these new times, and to maintain connections among members and the flow of information as much as possible.

Our activities on networking and connecting members, providing contacts and working one-on-one will continue intensively, using the possibilities provided for us by modern technologies. As has been the case to date, we will select topics on the basis of the business environment in Serbia and, of course, on the basis of the needs of members.

As Slovenia slowly begins to reopen to tourists, the new season highlights Slovenia's green gastronomy as one of the key reasons to visit in...
Read more

Bulgaria, Croatia, and Romania, alongside Cyprus and Ireland, represent the only EU member states outside of the border-free Schengen area. In early July, the...
Read more

"Globalization is done! It is now about management, and not about business. It is about being together in one world." The International Annual Presidents` Forum...
Read more

What Is The Position Of Women In Serbian Business?

Many Exceptional Women Have Yet To Shine With Full Splendour

According to Statista, Serbia is currently in 21st place in terms of the proportion of women in leading positions, better than Germany but far...
Read more

In May this year Halcom celebrated its 30th anniversary. It was created in a turbulent period full of challenges and opportunities. The challenges have...
Read more

Technological Innovations Are In Our DNA

We want to enter the mobile telecommunications market and offer our users 4P services, i.e., a combination of broadband internet access, television and fixed-line...
Read more

Deutsche Bahn has been providing engineering, consulting and train operation services, as well as digital systems, for many years and has successfully implemented railway...
Read more

Founded some 15 years ago by a consortium of visionary developers, Porto Montenegro is set in the spectacularly beautiful Bay of Kotor on Montenegro’s...
Read more