In average, it will take one year for the Serbian firms affected by the coronavirus pandemic to recover from the crisis, according to the results of the third iteration of “Overcoming the crisis together” survey, conducted by the Serbian Chamber of Commerce and USAID’s Cooperation for Growth Project, from June 8 to June 15. The micro-enterprises have been hit hardest by the crisis, while the liquidity remains as one of the key problems that firms have been facing. Digital solutions have been recognized as an essential part of a recovery strategy and business continuity

„The findings of the survey are valuable because they are “mirroring” the state of the economy and the reactions of businesses in the one month from the end of the state of emergency. We have been monitoring the impact of the crisis to Serbian economy since the coronavirus outbreak, by conducting three iterations of the survey. Representatives of 806 businesses participated in the first iteration of the survey, conducted in the last week of March – the third week since the beginning of the crisis. The second phase of the survey was conducted at the end of April in the seventh week since the crisis outbreak, with the participation of 1.000 businesses. Third and final phase of the survey was conducted one month after the end of the state of emergency. Representatives of 396 businesses participated. Having all three iterations in mind, we can proudly say that the survey approached more than 1500 companies distributed in different sectors, size, and region groups on the country level. It is also important to say that the third phase took place in the beginning of June, during relatively stable COVID-19 pandemic situation in Serbia, “, Dragana Stanojevic, USAID Cooperation for Growth Project Chief of Party explained for CorD magazine.

Impact of the crisis

92 percent of companies expect revenues to fall this year compared to 2019. The slope of the downturn depends partly on company size but is mainly determined by its industry. In contrast to expectations voiced during the state of emergency, the latest findings indicate a slight decline, to 16 percent, in the number of businesses that believe their revenues will be more than halved.

Companies based in the Belgrade region are on average more likely to expect their revenue to increase this year than their peers from elsewhere in Serbia. Micro-enterprises expect to see the largest falls, with nearly one-quarter believing revenues will slide by more than 50 percent.

The number of firms that estimate they have lost at least half of their usual revenue has declined to one-quarter (26 percent). One in two companies put their revenue loss at up to 30 percent relative to the same month one year previously. Nevertheless, a large proportion of respondents (15 percent) claim to be seriously affected (with earnings falling by 70 percent). Most of these companies operate in industries such as tourism, transport, creative industries, etc. 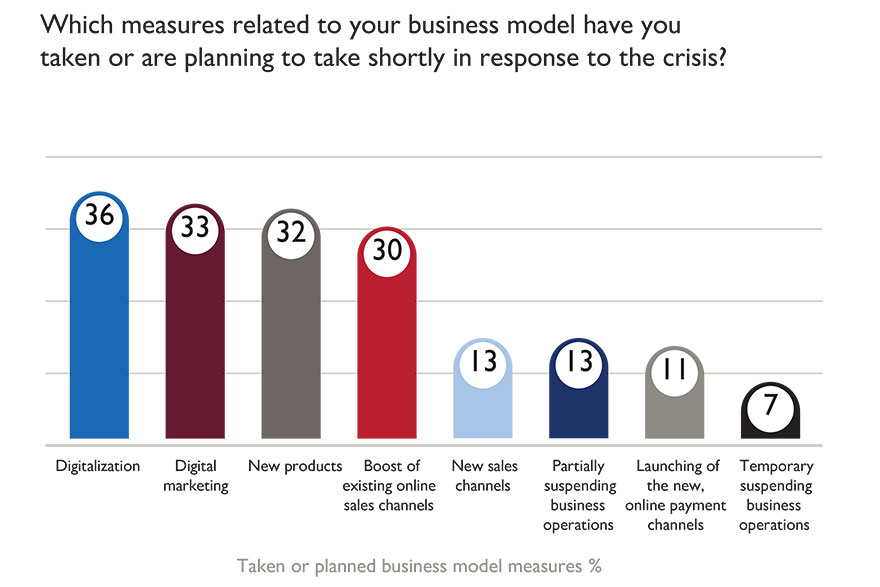 “Small firms have suffered the most. Оne-fifth of all micro-enterprises earned 70 percent less in June this year compared to the same month of 2019. As suggested by the findings of the second round, the crisis is spilling over into the IT sector and the various manufacturing industries. These results again highlight how important it is to devote more attention to the decline in performance in industries that have a major impact on other sectors in the same value chain (such as transport and warehousing). In next period we will see how global pandemic crisis will affect the value chains and in which way and how the inevitable disruption of traditional value chains will affect the economies’’, Dragana Stanojevic explained. “In a finding similar to those from the previous survey’s rounds, businesses believe minimum wage support and deferral of tax liabilities have been the most useful of the Government’s crisis response measures.”

Firms have largely arranged for some of their staff to work from home (as reported by 59 percent), the larger a company, the more prepared it has been to plan working from home. Industries more closely linked to brick-and-mortar spaces were less able to pivot to working from home, and so opted for other approaches to workforce optimization.

The shift to digital business models has proven to be both a crucial approach in weathering the Covid-19 downturn. Some businesses were better prepared for the emergency and were able to strengthen their existing online channels (as reported by 30 percent of all respondents), but most other firms also voiced their expectation that digital solutions will be required for recovery. 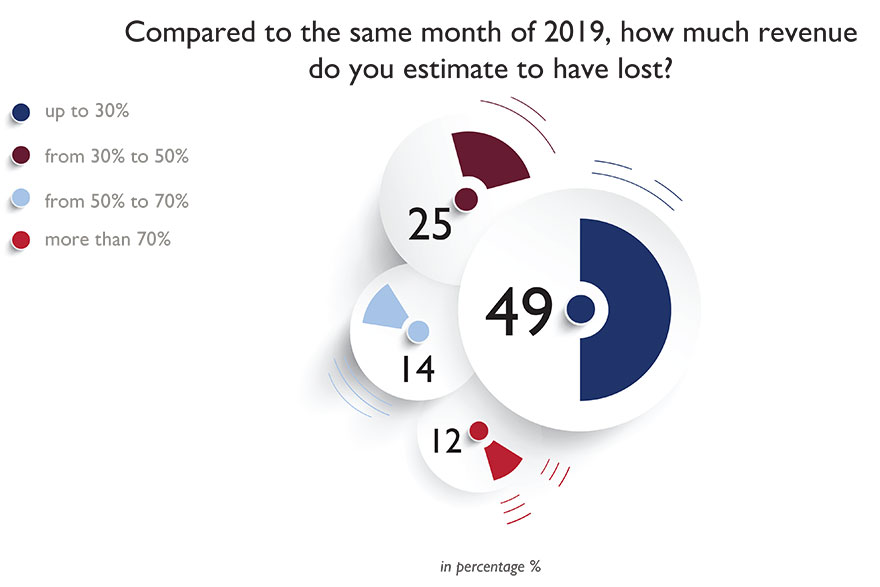 One-third of all firms’ report planning to develop new digital advertising channels, digitalize their business processes, and/or adapt their product portfolios to new developments in demand. About 13 percent reported responding to the downturn by either setting up online stores or gearing up to do so. Companies integrated into global supply chains were much more likely to alter their production algorithms or introduce new products (as reported by 40 percent of these businesses).

The most common strategy across all sectors has been to digitalize either business models or the whole access-to-market concept. Many companies have been able to find new niche markets and business models to best use their skills and survive. One in three companies see e-commerce and new advertising channels (digital marketing) as integral parts of their recovery strategy.

Nevertheless, two-thirds of all companies are inherently unable to shift their businesses completely online. As in previous surveys, these findings show that type of industry is decisive in determining possible shift.

Liquidity and time to recovery

Most companies are looking to fend off current and/or potential liquidity crises by managing their cash flow better (as reported by 72 percent). Many firms are planning to introduce client risk assessments (42 percent), negotiate payment extensions or advance payment terms with creditors, and take out liquidity loans offered by the Serbian Development Fund (33 percent). Lastly, just under one-third of those polled are planning to either borrow from their owners or from commercial banks or, alternatively, seek banks’ liquidity loans backed by national guarantee schemes. The take-up of factoring remains low with much room for improvement.

“Majority of the respondents (80 percent) continue to assume they will have issues paying debts and remain vocal in highlighting the seriousness of the private sector’s liquidity issues. No major differences are in evidence from the previous survey round (late April), as one in two companies still expect to encounter difficulties in paying what they owe within the next 30 to 90 days. There has been a noticeable increase, to 7 percent, in the proportion of businesses that believe they will have issues with paying their debts in the coming year. Micro- and small businesses were more likely to report such expectations. The findings show one in three medium-sized/large firms have plans in place to ensure they stay liquid”, said Dragana Stanojevic.

About 90 percent of the firms surveyed expect to recover within one year: most (27 percent) believe this will take between 3 and 6 months. Encouragingly, 11 percent of all businesses feel business will return to normal in under one month. As expected, the hardest-hit sectors believe it will take longer to recover (more than one year in some cases). In comparison to the previous survey, there has been a noticeable increase in the proportion of firms reporting a partial recovery in production/service delivery. Even though the serious crisis, the vast majority of businesses have been able to retain all staff throughout the state of emergency and into the post-lockdown period. It is especially heartening to see sectors that have a strong impact on supply chains reporting a degree of recovery, as is the case with 60 percent of all transport companies.

Firms believe the greatest obstacles on the road to recovery are a potential second wave of the pandemic and a repeated lockdown (as reported by no fewer than 73 percent). One-half of all companies (50 percent) fear a drop in demand for their products or services. About 40 percent expect to face issues with liquidity, access to finance, and/or changes to import/export policies.

“The findings from all the three survey iterations have been very helpful to keep a continuous understanding of the SME sector’s whereabouts in the first three months of COVID-19 breakout. During autumn period, USAID’s Cooperation for Growth Project will conduct the Survey of 1000 Businesses, that will provide more useful information and follow-up on SME’s vital circumstances and struggles on the market”, said Dragana Stanojevic.

After more than a year, German, French and Italian chambers members had the opportunity to meet live and initiate potential business cooperation. Bilateral chambers will continue to strengthen...
Read more

There’s Nothing More Contagious Than Success

When more technology companies understand that Serbia possesses a rich pool of intelligent and creative technology talent, and that the government is sincerely interested...
Read more

Great Partnerships Stand Behind Our Success

The Serbia of 2021 is a far different place than it was twenty years ago, when the economy was in shambles and democracy was...
Read more

USAID And ICT Hub Partner To Spur Innovation In Serbia

The first cross-section of the research - 8 economic areas with the greatest chance of success! ICT Hub and US Agency for International development (USAID)...
Read more

According to Catalyst Balkans, in 2020, citizens and companies in Serbia donated over 90 million Euros for the common good. The total value of...
Read more

Over the course of around a hundred years, G4S has evolved from a company specialising in manned security to a company providing efficient and...
Read more