Iceland travelled to Euro 2016 as the smallest nation ever to reach a major tournament – not bad going for a lump of volcanic rock halfway to the Arctic with a population the size of the Belgrade municipality of Vračar. But that was not the end of the story…

“It is a dream come true for us. We have grown up watching the English Premier League, and we have always wanted to play against England. We may not have players who all play for Barcelona and Real Madrid, but we beat England. Our faith and belief is what took us so far – and some Icelandic pride. We do not back down from anyone, and that team spirit and belief helps us a lot,” said Ragnar Sigurdsson, the best Iceland player speaking after the game against England.

Here they come, the Icelanders. Offspring of elves and Vikings, from the Iceland of social justice and sustainable power: Iceland always seems to be per capita kings, a place where nothing is wasted, only reproduced. 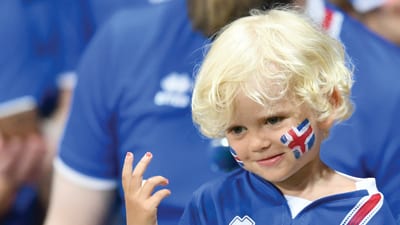 And now they’ve got football as well. Ranked 133rd in the world four years ago, the national team have risen a hundred places under Lars Lagerback, progress given a compelling narrative form by the money and care poured into the game at the grassroots during the prebust years, when the country had more cash than it knew how to spend. This summer Iceland travelled to France as the smallest nation ever to reach a major tournament, not bad going for a lump of volcanic rock halfway to the Arctic with a population of just over 300,000.

There is still an essential weirdness to this collective overachievement. Football has burrowed its way into the peat here and taken hold. Everyone plays the game. Everyone watches it. Iceland’s indoor football halls are a wondrous spectacle: synthetic bubbles plonked down in the tundra-like suburbs. But this is also a brittle kind of place, all shifting plates and sudden spurts of activity. Nobody really seems particularly disturbed, or surprised, by the idea that all this progress might not last. “We were very interested in banking, too,” is one slightly caustic observation.

After the match Iceland lost to former world champions and tournament hosts, France, thus ending their participation in EURO 2016, all French spectators were relieved to welcome the victory of their team, but also to pay their respects to the talent, perseverance, courage and fighting spirit of the entire national squad of Iceland

And yet here they are all the same. It is an Icelandic trait to take some small task and essentially do it to death. Some say this mentality comes from the fishing traditions, a kind of survival machismo, the need to sit through every millimetre of briny discomfort until the catch is full. “When an Icelandic person is destined to do something, they generally follow through,” Rafnsson says. “Some people would call it a disease. Sometimes you don’t even know when to stop.”

There seems to be a kind of hive-mind tendency here too. No doubt, but above all an indication of those dutiful collective habits Icelanders have in their genes. 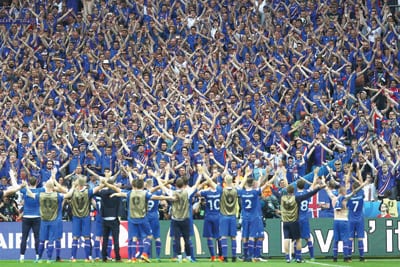 In the past 15 years football became an institutional obsession, seeded from the top down through the government, the FA and schools and individuals. For now the wheels are still turning, the production lines thrumming. At Euro 2016 the national team performed a miracle that wowed the entire world! And that brings us to Iceland as the smallest country at Euro 2016 and the biggest story.

There may never have been a national cultural event as all-encompassing as Euro 2016 was for Iceland. Almost 10 per cent of the population travelled to France to support the team, and 99.8 per cent of Icelanders are reported to have watched the win over England.

Iceland has commanded international headlines three times in the last 10 years. In 2008 they amazed the world with the spectacular scale of their banking crisis; in 2010 one of their volcanoes caused a shutdown of air travel throughout swathes of the Northern Hemisphere; and in 2016 they qualified for the quarterfinals of Euro 2016.

After the match Iceland lost to former world champions and tournament hosts, France, thus ending their participation in EURO 2016, all French spectators were relieved to welcome the victory of their team, but also to pay their respects to the talent, perseverance, courage and fighting spirit of the entire national squad of Iceland.

Proven Values for Both Good Times and Bad

In times of hardship, examples of true cooperation like the Nordic one seem even more meaningful than during “regular” times. Yet such relationships, based...
Read more

Sweden, Norway, Finland, and Denmark (collectively the Nordic countries) have a combination of high living standards and low-income disparity that has captured the world’s...
Read more