Although public administration reform is a complex issue, Montenegro has been recording significant progress in this area. The Ministry is also considering thoroughly how it wants to develop services in such a way that they are accessible to citizens and companies

It was noted in the most recent European Commission Progress Report on Montenegro that the country is moderately prepared when it comes to public administration reform. Viewed as a whole, good progress has been achieved, especially with regard to the mediumterm policy planning framework, meritbased recruitment and rationalisation of the organisation of state administration, says Montenegrin Public Administration Minister Suzana Pribilović. The report also noted that strong political will is needed to resolve, in an effective way, the issues of public sector depoliticisation and public administration optimisation, the development of policies that are inclusive and evidence-based, delegation in decision-making processes and accountability of the leadership.

“Developing policies that are inclusive and evidence-based is one of the key obligations on the ministry’s agenda. Through a series of activities from the previous period, we have been dedicated to improving the situation in this area.”

The aim is to contribute to the efficient and economical work of state agencies and funds, particularly with a view to them reporting and controlling their work in the prescribed way, which will simultaneously lead to the transparency of work, and – on the other hand – greater satisfaction and trust in their work among citizens.

What are the Ministry’s plans when it comes to the professional improvement of civil servants and advancing the management of human resources?

– With the new Law on Civil Servants and State Employees, the segment of professional training and development of civil servants, from traineeships throughout their careers, has been improved. A civil servant or state employee has the right and obligation to be professionally trained and advanced in order to improve knowledge and skills, i.e. the ability to perform jobs in the workplace. The Regulation on vocational training and additional education introduced unique standards for the management of human resources, which will significantly improve the civil service system, both through improvements to the work of human resources units and the overall work of bodies.

How satisfied are you with the process of digitalising public administration and what new services can business users and citizens rely on?

– When it comes to the digitalisation process in the state administration, what we can state with certainty is that Montenegro is moving towards digital development together with the countries of the region. However, we are aware that we still have a lot of work ahead of us, and that technological trends in this area dictate the accelerating pace of adapting to change. Changes, on the other hand, require significant resources in terms of both financial and organisational resources, but also human capacities.

The Ministry of Public Administration coordinates the development of IT infrastructure for the needs of all state administration bodies, and through the development and coordination of e-government processes, we endeavour to raise public awareness regarding the opportunities provided by digitalisation, while on the other hand we take care of the delicate and increasingly important cyber security process. 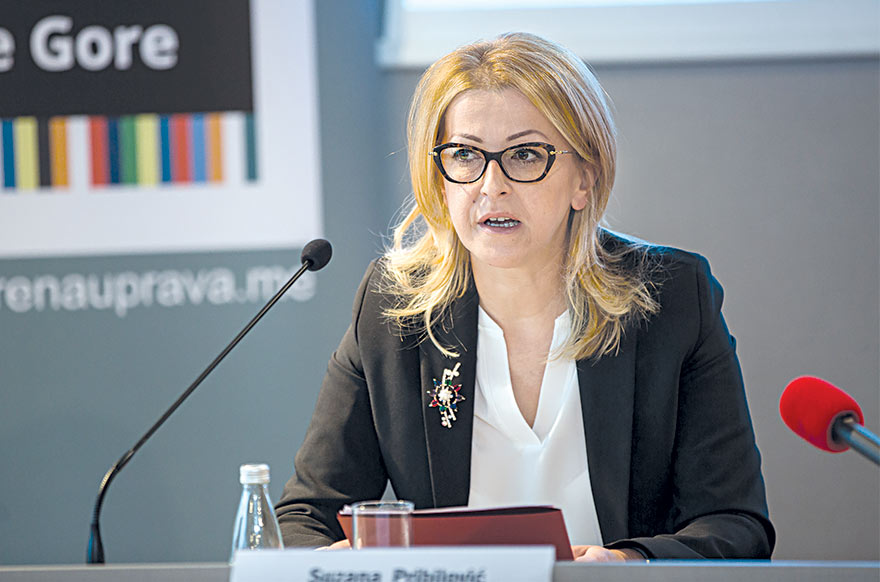 The development of e-government represents a significant segment of digitalisation in public administration as a whole. However, while the number of electronic services on the eGovernment portal has increased and growth in their usage is evident, those still aren’t numbers that satisfy us. On the contrary, we’re aware that it’s essential to work on educating citizens and promoting the very concept of eGovernment, as research unfortunately also shows that Montenegrin citizens still prefer the traditional way of dealing with public administration. There we see lots of room for improvement, so in the period ahead we will devote attention to the development of new services within the jurisdiction of local self-government, while we are working with the Ministry of Education on the establishing of services for enrolling children in pre-school institutions and primary schools.

How is the establishment of One- Stop-Shop centres in Montenegro envisaged, and when will that be implemented?

– We address this issue with particular attention and we’re still analysing and comparing various concepts that exist in the world, as well as their effectiveness on the opportunities, mentality and habits of Montenegrin citizens. There are numerous existing models in the world today, from a fully digitalised service type, while some countries have also maintained physically established centres. A one-stop-shop provides services to citizens in the way that is most comfortable for citizens, and as such a relatively long time is required to establish such centres, given that their establishment requires the synchronising of numerous state bodies, infrastructural capacities, as well as significant human resources. We are considering a hybrid concept that will combine the two aforementioned models, taking into account what citizens have stated when it comes to public administration services, as well as the necessity to digitalise the state and the essential development of electronic services, and consequently with that the affirmation of e-government.

Have the normative solutions contained in the new Law on Administrative Procedure come fully to fruition in practise?

– The new Law on Administrative Procedure, which came into force as of 1st July 2017, simplifies and speeds up administrative procedures, reduces the costs of processes for all participants, creates conditions and openness towards the use of modern informationcommunication technologies for the provision of administrative services (so-called e-government). In the previous period, the Ministry of Public Administration prepared a unique Report on the implementation of the new Law on Administrative Procedure at the central and local levels for the period from 1st July 2017 to 31st December 2018, which showed a high degree of efficiency and promptness of authorities/ institutions in resolving the rights, obligations and legal interests of citizens, and the satisfaction of citizens with the services provided by public authorities. In bodies/institutions at the central and local levels, from 1st July 2017 to 31st December 2018, a total of 3,080,165 administrative processes were initiated, as shown by the Report on Handling Administrative Matters.

However, in administrative-legal regulations, certain legal institutes have not sufficiently come to fruition, as indicated by the aforementioned Report, such as merit-based decisionmaking, which implies the obligation of a second-instance authority resolving an administrative matter itself if, on the basis of an appeal, it has already annulled a first-instance decision, the institute of administrative contracts, the institute of the authorised official person, and in the case that the electronic communication between the authorities and the parties has not come to life sufficiently.

Montenegro will provide its citizens with an identification document next year with which they will receive, in addition to an electronic identity, a qualified electronic signature

You’ve announced the unifying of ID cards, health booklets and other formal documents through a National Identification Document. How challenging is this task logistically and technically?

– The Law on Identity Cards envisages that, in addition to other elements, the new identity card must include a certificate for electronic identification and a certificate for a qualified electronic signature. With these amendments to the Law on Identity Cards, the new identity card will represent a material resource through which citizens of all ages will physically prove their legal identity and will represent a material resource with which a citizen can prove their legal identity electronically. 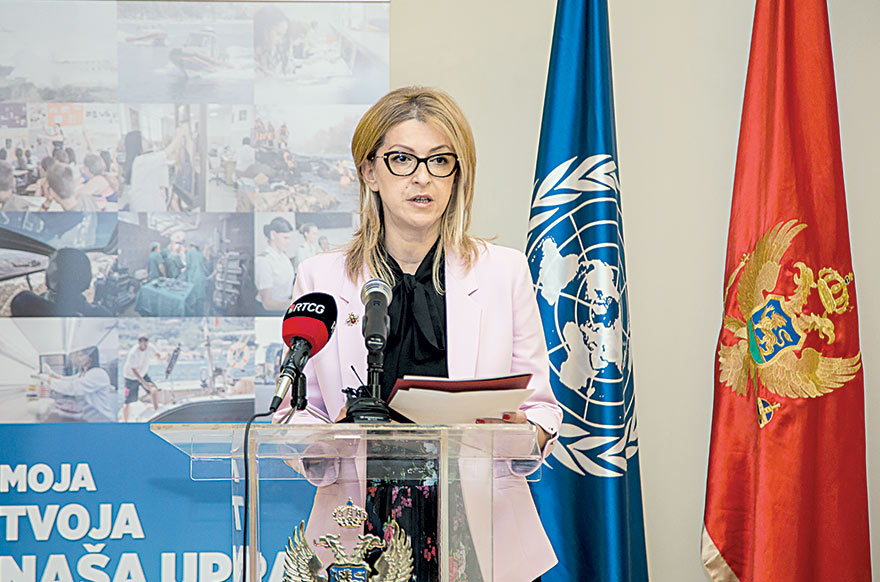 One of the measures is to use open data with the aim of supporting start-up businesses. Can you tell us more about this measure?

– With the adopting of legislation and establishing of the open data portal data. gov.me, the conditions have been created for the publishing of data sets by public authorities.

In coordination with official bodies, continuous work is being done to select the data that will be published. With rhe aim of implementing the measure, in addition to the proactive publishing of data by institutions’ administrators, which implies continuous cooperation and the educating of institutions’ administrators, with work in parallel on promoting the use of open data, as a significant resource that can advance a start-up business, through the organisation of public event and competitions in order receive joint user feedback on the functionality of the portal.

With the aim of implementing the measures, support activities for start-up companies will also continued through inter-ministerial cooperation with the Ministry of the Economy, Ministry of Science, the Investment Development Fund, the Chamber of Commerce and other institutions, which jointly provide support to start-up companies in the field of information-communication technologies.

The Chamber of Commerce & Industry of Montenegro, in cooperation with the Ministry of Public Administration, is implementing the Odeon (Open data for European Open iNovation) project. The main aim of this project is to create a new management model based on the use of open data, in line with the Digital Single Market Strategy.

We Have Room for Growth On New Foundations

Vlastimir Golubović, President of the Chamber of Commerce of Montenegro

The Government Listens to Our Recommendations

The Chamber of Commerce of Montenegro provides a strong professional contribution to improving the business environment for the development of all sectors of the...
Read more

Radoje Žugić, Governor of the Central Bank of Montenegro, CBGS

We Have Reason to Be Satisfied

The banking system in Montenegro is stable, highly capitalised, liquid and profitable, while most key indicators, such as deposits, loans, balance sheets, bad loans...
Read more

Montenegro needs innovative solutions in the area of infrastructure, as well as efficient and effective partnerships between the public sector and private companies. It...
Read more

Under the leadership of Prime Minister Fumio Kishida, Japan is implementing various policies aimed not only at overcoming the difficult circumstances arising from global...
Read more

Many New Opportunities For Cooperation

JICA’s cooperation in Serbia will continue based on the Initiative and Country Assistance Policy, while the priority sectors for cooperation will remain private sector...
Read more