Montenegro needs innovative solutions in the area of infrastructure, as well as efficient and effective partnerships between the public sector and private companies. It is increasingly common for private-public partnerships and concessions to be considered as the preferred implementation modalities

Transport is among the most dynamic sectors in Montenegro, both due to its developmental component and because of the number of significant projects in the area of roadworks and rail. Alongside that, this area is also very important for the issue of European integration and transport connectivity with the most important market for the countries of the Western Balkans.

To what extent are the policies of the Montenegrin Government in the field of transport harmonised with European policies in this area?

– Montenegro also harmonises its transport policies through two EU accession negotiation chapters – 14 – Transport Policy and 21 – Trans-European Networks – and defines priorities with the aim of harmonising with the EU acquis from the aspect of legislation, reforms and strengthening administrative capacity and its institutions.

It was in June 2019 that the Government of Montenegro adopted its Transport Development Strategy 2019-2035, with a 2019-2020 Action Plan, which was also one of the final benchmarks for Chapter 21 – Trans-European Networks, and which is aligned with EU policies, TEN-T guidelines and standards, and which was met with the positive opinion of the European Commission even prior to its adoption by the Government of Montenegro. The strategy established five strategic goals that reflect the vision for the development of the transport system. These are economic well-being, ensuring the highest possible availability, offering quality transport services and maintaining an adequate level of services in performing operations; raising the level of safety and security of people and goods in transport; integrating into the Trans-European Transport Network (TEN-T) and the harmonising of transport policies with EU requirements and environmental sustainability in the sense of reducing carbon dioxide emissions, noise levels and impact on the natural, historical and socio-economic environment. 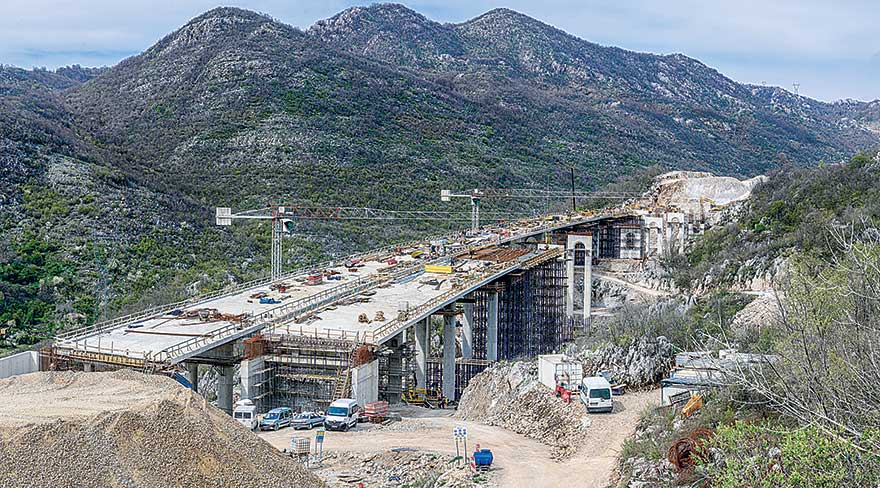 This strategy defined the strategic directions of our activity in the field of transport for the next long-term period, and I believe that – provided we are all systemically dedicated to working towards achieving the goals set – the Montenegrin transport system will be in a position to respond adequately to contemporary challenges and the needs of the economy and citizens.

– The transport system is a very important segment of the overall economic system; we can state freely that it one of the key segments, because it means connectivity, and without high-quality connections that enable the timely transporting of resources it is not possible to do business or for certain businesses to develop further. In this sense, every initiative that means the creating od stronger and better quality connections and the eliminating of barriers is something that every country should support.

The establishing of the Transport Community of Southeast Europe has a multifaceted mission, because – in addition to enabling the harmonising of our legal system with that of the European Union in the field of transport and creating the prerequisites for technical support and the further development of our transport systems in a sustainable way – it should primarily enable the better connectivity of the markets of the region, but also connectivity with the EU market. We are increasingly hearing about the idea of establishing a common market in the Western Balkans, and in that sense it is necessary to foster trade exchanges in the region, which must be accompanied by the intensive development of transport infrastructure, as well as efficient and secure transport links, in order for the region as a whole to be made more attractive for flows of transit transport. Only countries that are well connected to the markets towards which economies gravitate can rely on stable economic growth and development over the long term, and the Western Balkan region has great economic potential.

What does the Transport Development Strategy 2019-2035 bring in this context?

– Montenegro’s newly adopted Transport Development Strategy 2019-2035 takes into account the recommendations and requirements established through the so-called Berlin Process and the Connectivity Agenda, which first seeks to develop physical infrastructure and connect to the TEN-T network, but also the implementation of so-called soft measures aimed at opening up the transport market, establishing a competitive, reliable and safe transport system through the improving of road safety, introducing intelligent transport systems, establishing an efficient system for maintaining road infrastructure, as well as improving the efficiency of procedures at border crossings.

With the exception of the section of the highway that’s under construction, what kinds of plans does the Government have in the area of developing road and rail transport?

– The Strategic Plan for the Implementation of Infrastructural Investment in the Field of Transport was provided through the Unique List of Priority Infrastructure Projects, which the Government of Montenegro first adopted in December 2015 and which currently encompasses 12 projects in the area of transport that have a total estimated implementation value of 3.38 billion euros. The list encompasses projects in all forms of transport, but the most valuable and significant projects are certainly in the field of road and rail transport, and those include the construction of remaining sections of the Bar-Boljare Highway, primarily the sections along the route from Mateševo to Andrijevica, then construction of the Adriatic-Ionian Highway along the Montenegrin coast, reconstruction and modernisation of the Bar-Vrbnica and Podgorica-Tuzi railway lines, and construction of the Nikšić-Čapljina railway.

In the area of railway transport, works are continuing on the reconstruction and modernisation of railway infrastructure and the modernisation of trains, in such a way that multiple infrastructure projects relate to the general overhaul of railways, the renovation of bridges, ramps and tunnels, as well as the modernising of signage, while in the field of transport vehicles the procurement of three new trains for local transport have been approved, as well as funds for the modernisation of workshops and depots and for the procurement of railway maintenance machinery. The level of investment in rail projects is increasing year on year and ranges from 10-15 million euros at the annual level. In this way the conditions are created for the significantly safer, more productive and more modern transportation of passengers and goods by rail.

Which sources of financing do you rely on when it comes to building transport infrastructure?

– Determining sources of financing for such valuable investments as those in infrastructure is also a challenge for the most developed economic systems. Securing and maintaining fiscal stability is a precondition not only for overall economic stability and long-term economic growth, but also for the availability of international financial markets, while it is also a condition that Montenegro must satisfy in the EU accession process. With the aforementioned as a starting point, some of the main objectives of managing public finances in the medium term have been defined as the optimisation of current spending, along with increasing investments in infrastructure and the sustainability of public debt on the part of new borrowing just for financing development projects and refinancing existing debt, with the restrictive issuance of state guarantees. 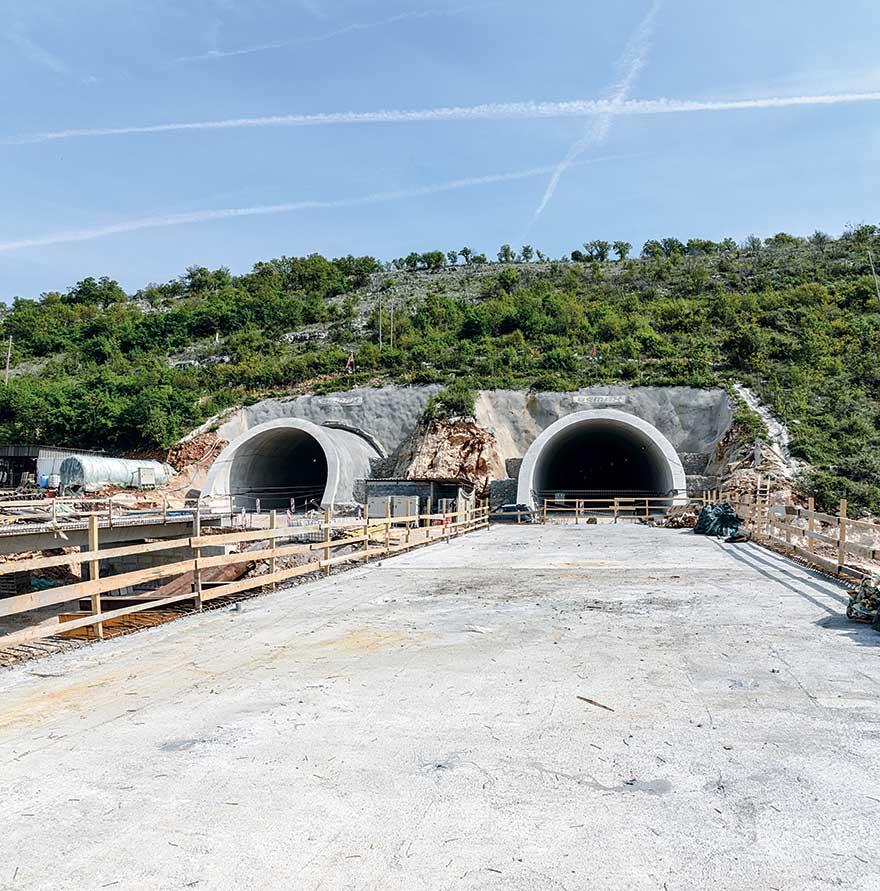 Considering all of this, but also Montenegro’s current level of indebtedness, the Montenegrin Government is committed to seeking models for the implementation of capital infrastructure projects that do not include the issuing of new government guarantees and/or borrowing. Montenegro needs innovative solutions in the area of infrastructure, as well as efficient and effective partnerships between the public sector and private companies. It is increasingly common for private-public partnerships and concessions to be considered as the preferred implementation modalities, and with the increasing level of maturity of projects, interest is expected to increase among potential implementing partners and financial institutions.

The government’s decision to introduce other concessionaires for piloting, tug and haulage services in the aquatory of the Port of Bar has been met with criticism. Why did you decide to take this step and is the government’s announcement regarding this topic a point of the debate on this issue?

– I would first like to say that the Government’s decision to initiate the procedure for awarding concessions for the provision of port services in the waters of the Port of Bar is in full compliance with all laws that regulate this area (Law on Ports, Law on Concessions, Law on the Safety of Maritime Navigation). As such, the Government, as the Concession Grantor, certainly had a legal and legitimate right to make such a decision. Of course, the reaction of the existing Concessionaire to such a decision is another issue, and the Ministry of Transport and Maritime Affairs has already made a public announcement of its stance regarding allegations of this kind. However, for the sake of fully informing your readers, I would highlight certain facts that I’m sure will also ensure the true state of affairs is made clear to readers when it comes to the granting of a new concession for the provision of port services.

What I value as being particularly significant is the fact that granting a new concession is no way allegedly compromising the safety and security of maritime navigation, for the reason that the port authorities take good care of maritime traffic and its regulation in a conscientious and professional way. Likewise, via the VTMIS system, the Maritime Security and Port Management Administration constantly oversees overall maritime traffic, which ensures an additional degree of safety and security.

It’s clear that there’s no existing legal or practical impediment to having more concessionaires in the same water area engaging in the same concession activity, considering that all concessionaires are also subject to regulations governing, for example, the maintaining of order in the ports and that, of course, the awarding of a concession does not exclude the competencies of the relevant authorities, which will take care to ensure compliance with conditions under which all standards guaranteeing the provision of services in a smooth, safe and secure manner will be satisfied.

If the art of creating the Brussels compromise consisted, for many years, of searching for solutions that are acceptable to both the “engine of...
Read more

There’s no high risk of a public debt crisis or a banking crisis in Serbia for now, but the country is confronted by unresolved...
Read more