Behind the Zentiva Serbia team stands a...
Read more

With a Good Tailwind

According to the estimates of the Development Agency of Serbia, 2020 will be marked by the further growth of investments, primarily in the automotive and food industries, tourism, ICT and the electronics sector, as well as generally in projects that imply high-tech processes and capital intensive investments

For the Development Agency of Serbia (RAS), and first and foremost for Serbia, 2019 was another very successful year, at least if we look at inflows of foreign direct investment (FDI). Just in the first ten months of 2019, FDI inflows totalled 3.243 billion euros. By comparison, for the whole of 2018 – which was the most successful year to date – we had FDI totalling 3.496 billion euros.

“We expect the official figure to be higher when the amount for the last two months of 2019 is added,“ says RAS Director Rados Gazdić. “Specifically, during the last year there were some major, strategically important and technologically advanced projects announced and initiated, such as MTU Aero Engines AG, BROSE, Linglong Tire, ZF R&D, Barry Callebaut, Boysen, Minth, Yanfeng, Ellis Enterprises East, Feka Automotive etc. In the new year, the launch of works or even production lies ahead for some of these projects.”

At RAS they expect the further growth of investments in 2020, which will be followed by an ever increasing number of capital intensive investments.

When it comes to investment trends by sector, the focus is expected to be on the automotive and food industries, the development of spa facilities, the ICT and electronics sector, as well as on investments generally in projects that imply high-tech processes.

If we look at the locations of investments, what characteristics do you see?

– Investors that bring and invest in high-tech areas pay really close attention that the locations of their future factories are close to one of the country’s four university centres. They want to thereby secure highly qualified and professional staff for their future projects. On the other hand, in the south of the country we still have an unemployment rate that’s not so low, and it is there that labour intensive projects initially arrive, while the north of the country is still dominant for capital intensive projects. As unemployment continues to fall in these southern areas, there will be a natural equalising of the North-South ratio in terms of capital- and labour-intensive projects.

It is said that the European car industry is very volatile and that many countries, such as Hungary and Slovakia, are today striving to diversify. How much is Serbia exposed to such risks?

– Around the whole world, and especially in Europe, falling car sales were recorded in the last year. Given that we are focused on the automotive industry and that we have major investors in that field, our attention is focused on current happenings in that industry, and at this moment we don’t really see any slowdown in investment in the automotive sector. However, we are strategically orientated and focused on the future of the electronics industry, ICT, the manufacturing of machinery and equipment, tourism and the food industry, with which those potential risks are actually reduced.

What would you single out as RAS’s greatest successes in terms of cooperation with Japan International Cooperation Agency (JICA) and Japan External Trade Organisation (JETRO)?

– One of the greatest successes during the over 15 years of cooperation with Japanese agency JICA is the standardisation of the mentoring service and the recognisability and acceptance of this service by the SME sector, on the basis of knowledge conveyed by Japanese colleagues, experts. By year’s end 2019, approximately 2,400 SMEs, entrepreneurs, cooperatives and clusters were using the standardised mentoring service, and tangible results observed among domestic firms included evident increases in sales, a greater presence on the market, efficient organisation of production processes, increased employee numbers, an increasing number of customers, the opening of new markets and the like. 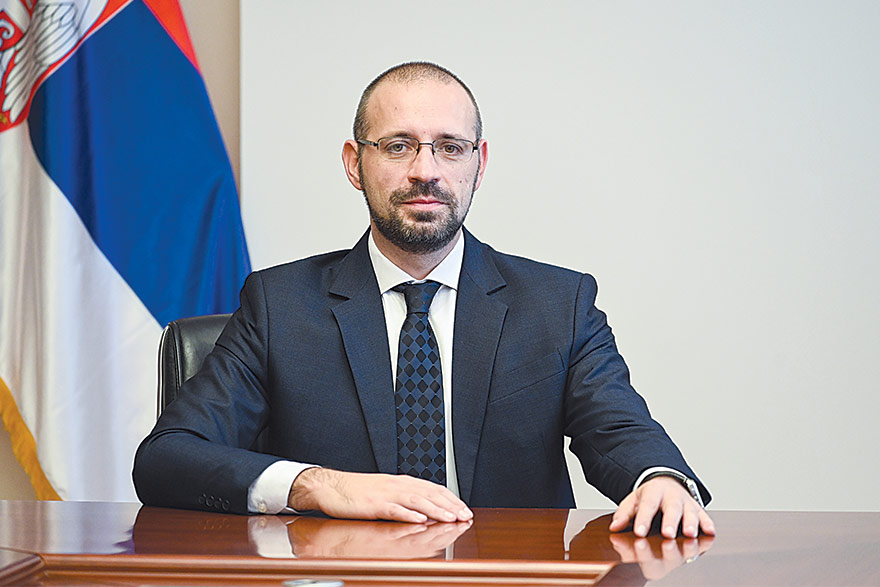 The importance of the mentoring service, as well as cooperation between RAS and JICA, is reflected in the fact that this project is the fourth in a series of projects that we’re working on together. Collaboration with JICA began in 2006, and we’ve had four joint projects to date. Cooperation is currently being implemented through the project “Establishment and Promotion of Mentoring Services for SMEs in the Countries of the Western Balkans, Phase 2”. The most important goal of this project is to transfer the RAS standardised mentoring model for MSMEs within the Western Balkans (Bosnia-Herzegovina, Montenegro and North Macedonia), while it is no less important that micro, small and medium-sized enterprises in Serbia and the region continue to develop their operations while using mentoring services.

RAS also submitted an application during 2019 for a fifth consecutive project, which will form the basis of continued successful cooperation with JICA beyond 2020, while during this year we will continue providing standardised mentoring services to companies through programmes funded from the budget of both the Agency and the Ministry of the Economy.

How much do these and similar contacts help in the promoting of exports and inclusions in the supply chains of multinational companies?

– The Development Agency of Serbia has created two new and extremely important support programmes for SMEs, and those are the Support Programme for the Promotion of Exports of SMEs and the Support Programme for Companies to Enter the Supply Chains of Multinational Companies. We expect the launch of a public invitation for inclusion in export promotion programmes in March, while the implementation of support activities under the scope of the Support Programme for Supply Chain Entry is already in full swing, given that contracts with selected beneficiaries were signed at the end of 2019. What distinguishes these two programmes compared to all previous ones is that we’ve introduced the stage of business performance diagnostics prior to deciding on the allocation of funds – with this we succeeded in identifying the companies that have the greatest growth prospects and to gain proper insight into the needs of users and for us to provide them with a support package that will provide the best results in terms of improving their performance and creating opportunities for realising new jobs.

The primary role of RAS will be to work on the development of supplier chains and to support the internationalisation of the operations of enterprises, as well as striving to achieve regional and international economic connectivity

When creating draft proposals for both programmes, we held a series of meetings with representatives of the private sector, including representatives of multinational companies, and – with advisory and other support from international organisations and consultants (WB, EBRD, ARRA etc.) – we identified the problems and needs of the private sector in Serbia, but also the needs of the market, and managed to incorporate into these programmes the knowledge, experience and advice of multinational companies and all associates. For example, for the Supply Chain Inclusion Support Programme we have an Advisory Board composed of representatives of multinational companies, while the programme was also initiated with the support of the World Bank. Establishing contacts and collaboration with different organisations give us the opportunity to learn a lot from their many years of experience, especially in working with SMEs, and to transfer that knowledge to local businesses through our programmes.

How ready are our businesses to enter such supply chains today? In which sectors is this cooperation the most pronounced?

– The noted programs target the food and wood industries (export promotion) and production and processing in the automotive, mechanical, metal, wood and furniture industries, rubber and plastics, electronics and electrical systems and elements, the production of household appliances and parts, and the like (supplier chains).

It is precisely those sectors that are targeted through support programmes that are also recognised as the most ready and able to develop supplier chains, increase export capacities and conquer new markets. During preparatory meetings for the creation of export promotion programmes, which were organised with representatives of our companies from the food and furniture production industries, there was agreement that a lack of knowledge is what most hinders new business opportunities and that the support that would mean the most to domestic companies would be in the form of acquiring knowledge about the right ways to market products, effectively organise production processes and logistics, find contacts and the legal aspects of doing business on international markets… The situation is similar when it comes to inclusion in the supply chains of large multinational corporations – our companies lack knowledge of what they lack in business and what they need to improve in working processes in order to reach the level necessary to enter supplier chains. 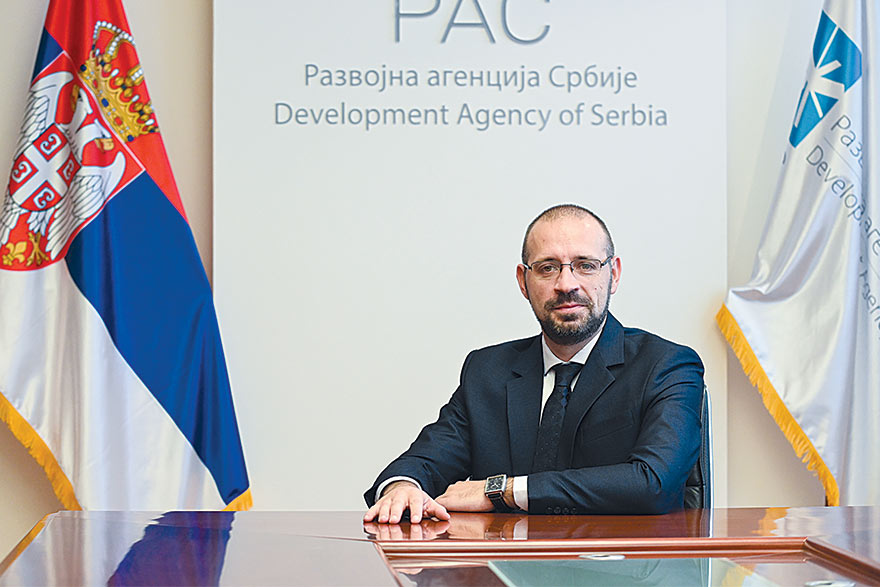 In addition to these areas, Serbia has also singled out the following priorities: faster growth of start-up companies and greater contributions of fastgrowing SMEs, regional specialisation of the processing industry, solving the problem of large losses and creating a new industrial policy. In which areas do you primarily see the role of RAS?

– The primary role of RAS will be to work on the development of supplier chains and to support the internationalisation of the operations of enterprises, as well as striving to achieve regional and international economic connectivity. That also means simultaneously empowering small and medium-sized enterprises, especially fast-growing ones. And in accordance with the general tendency for industry to turn more towards smart technology, it is also our goal to support and contribute to the technological modernisation of the processing industry and the road towards the smart industry.

Given the wide range of works in which RAS is involved, do you consider that you have at your disposal appropriate human and financial capacities to match Serbia’s plans for faster economic development?

– Serbia’s economic development plans are created in such a way that they envisage and include all relevant stakeholders and factors in the process of strengthening the economy and the economic environment. Planning works, strategic commitments, budget planning at the national level and the level of RAS, along with other activities, are mutually harmonised, well planned and complementary. With that, no single step is arbitrary, not even an assessment of the capacity to carry out activities, whether financial or human. As such, for now we have sufficient capacities.