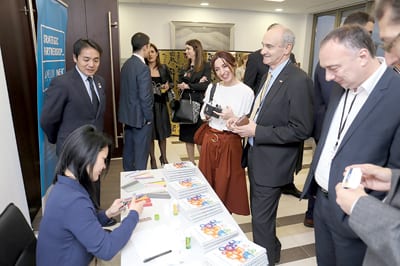 Partnership Between Mellon Serbia And NEC

The strategic partnership between Mellon Serbia and NEC was further confirmed on 15th November, when the companies jointly organised a business networking cocktail reception on the premises of the Embassy of Japan for members of the Japanese Business Club. In the presence of more than 40 guests, Mellon Serbia once again confirmed its dedication to cooperating with Japan’s NEC.

Astellas: “What Inspires You To Donate?”

Japanese pharmaceutical company Astellas organised an event to launch its campaign “What inspires you to donate?”, which is focused on raising awareness regarding organ donation and the benefits of transplantation in Serbia. The ceremony was attended by leading experts in transplantation, media representatives and guests of the Embassy. 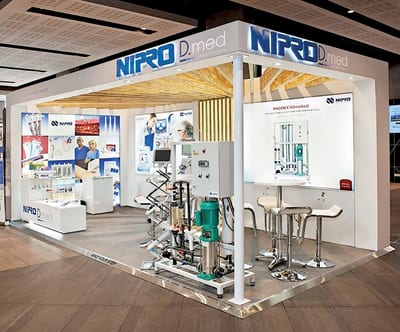 Japanese company Nipro and its Serbian partner, Nirpo DMed, organised promotion of the Surdial-X dialysis machine, which was presented for the first time to numerous nephrologists from various health institutions, including the Military Medical Academy, clinical centres of Serbia and general hospitals in several Serbian cities. 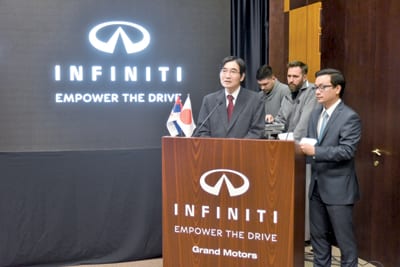 Grand Motors, the local partner of Japanese luxury car brand Infiniti, organised the promotion of its latest Q30 model at the Embassy of Japan on 30th October. This was the first time that the Embassy had ever hosted such an event, which took place in the evening hours and was attended by numerous participants, guests and media representatives. 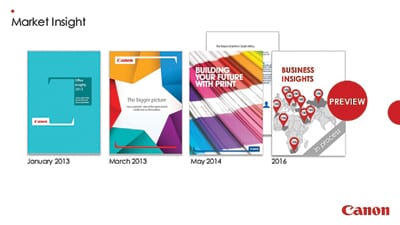 Japanese company CANON organised its Digital optimisation solution for CFOs event at the Embassy of Japan on 27th October. The event, which was aimed at promoting CANON’s digitisation services, brought together around 20 CFOs of renowned Serbian companies. 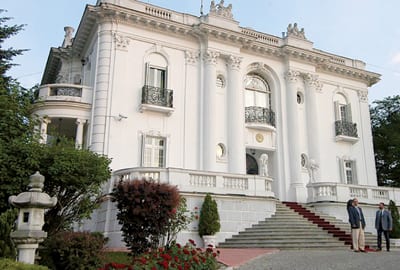 The traditional annual Business Lunch intended to bring together members of the Japanese business community in Serbia was organised at the Japanese Ambassadorial Residence in Belgrade on 18th October and hosted by H.E. Ambassador Juichi Takahara.

In the presence of more than 50 guests, including representatives of Japanese companies, institutions in Serbia and Serbian government bodies, such as the Development Agency of Serbia, views were exchanged regarding the business climate in the country over the past year and discussions addressed the future activities of the Japanese Business Club. 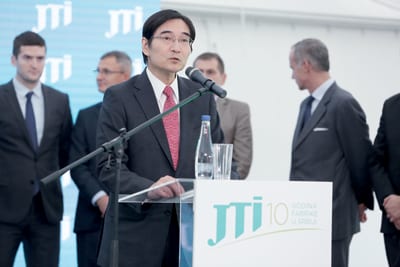 Ambassador of Japan to the Republic of Serbia, H.E. Juichi Takahara, together with Serbian Prime Minister Aleksandar Vučić and JTI President and CEO Tomas McCoy, visited the JTI tobacco factory in Senta on 6th October. The visit was organised as part of celebrations marking the 10th anniversary of the opening of JTI’s factory in this city in northwest Vojvodina. 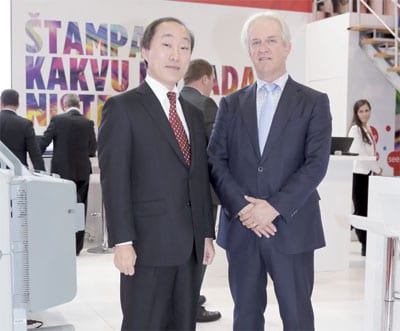 Masahiro Suga, Minister at the Embassy of Japan to the Republic of Serbia, attended the official opening ceremony of the 38th GRAFIMA Fair at the Belgrade Fairgrounds. GRAFIMA is the graphics industry fair that has been organised continuously since 1979 and which represents the most important regional event in this field, gathering together international companies active in the paper, graphics and creative industries.

This year’s GRAFIMA was officially hosted by Japanese company CANON, which is a leader in the graphics industry globally and has had an active presence in Serbia for over 10 years. 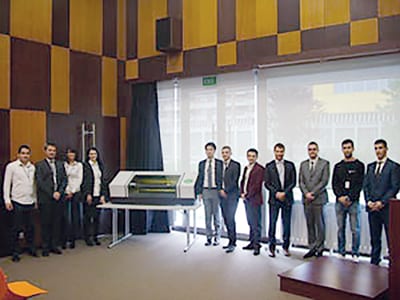 Serbian company DIFOL, in cooperation with the Embassy of Japan, organised a presentation of the latest printing machine produced by Japanese company ROLAND: the LEF – 300.

The presentation, organised in the Ceremonial Hall of the Embassy of Japan in Belgrade, was attended by Japanese Embassy First Secretary Yoshifumi Kanno, ROLAND company representative Yoshihiro Tate, DIFOL owner Dragan Popović and numerous guests and partners of DIFOL. 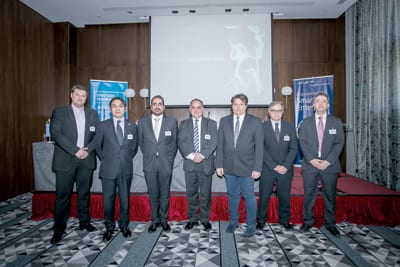 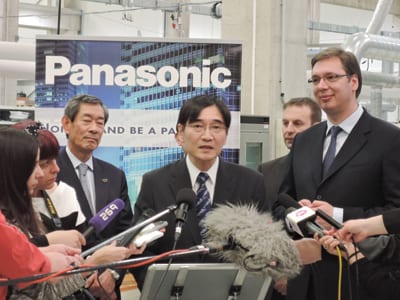 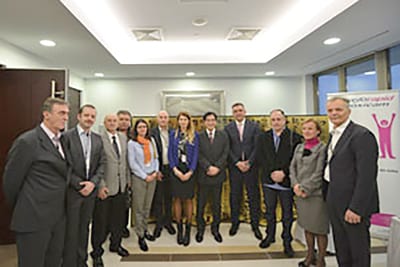 Company Takeda and the Embassy of Japan jointly organised a 1st March seminar, entitled: “Presentation of modern treatment methods in orthopaedics”, in the Ceremonial Hall of the Embassy of Japan in Belgrade. The seminar was attended by doctors from the most eminent Belgrade health institutions: the Military Medical Academy, the Orthopaedics Institute Banjica, the Clinical Centre of Serbia and the Bežanijska kosa Clinical Hospital. 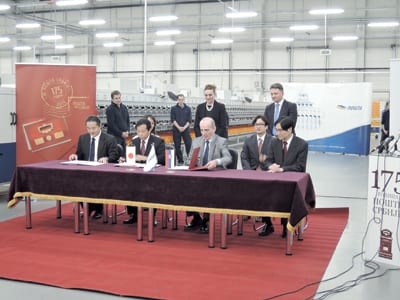 Japanese Ambassador Juichi Takahara visited the logistical centre of Public Enterprise “Post Serbia”, the Serbian postal service, on the occasion of the 29th January signing of a memorandum on technical cooperation between Japanese company Toshiba and Post Serbia.

Cooperation Based On Strong Cultural Ties

Although Yazaki is only the third Japanese company to invest in Serbia, the two countries cooperate closely on the international scene when it comes to topics that are of common interest, in the fields of culture, scientific interchange and tourism. Given the reform processes in Serbia, both sides are looking forward to more vigorous trade exchanges and investment activity
Read more

Office Working Towards A Seat In The EU Opportunities Ahead

Apart from our core business in the region, which is trading, our next step is connected to Serbia’s future EU membership and our interest is related to infrastructure projects. Entering the EU will give you, and us, new opportunities for further cooperation
Read more

Serbia Is A Valuable Investment Choice

JTI has tripled its market share in ten years, becoming one of Serbia’s key taxpayers and a valued employer that directly employs 300 people and cooperates with farmers, providing a living for 1,000 people in Vojvodina
Read more

Following successful cooperation on flood relief efforts in 2014, UNDP once again joined forces with its trusted and long-standing development partner, the Government of Japan, to tackle another burning issue in Serbia: the migrant and refugee crisis
Read more

Yoshifumi Kanno, First Secretary At The Embassy Of Japan

Japan has recognised Serbia’s need for support every time that it has faced difficult times, such as during the 2014 floods and the ongoing struggle to accommodate migrants. Moreover, the mutual friendship between two countries has been confirmed many times and in different areas of cooperation
Read more

The companies gathered together in the Japanese Business Club want to support the Serbian Government in its efforts to provide the private sector with the best possible business conditions. This will benefit both the State and the citizens, as higher employment will bring a better standard of living
Read more

Miloje Obradović PhD, President Of The Commission For The Protection Of Competition

We Protect The “Rules Of The Game”, Not The Players

During the previous decade, the Commission has strengthened in terms of personnel and institutional capacities, and it now sees the fight against cartels as its priority in the period ahead. The Commission has had support in its work for years from the Japan International Cooperation Agency – JICA and the Japan Fair Trade Commission – JFTC
Read more

Japan's economy has continued its moderate recovery trend, although exports and production have remained sluggish, due mainly to the effects of the slowdown in emerging economies. The outlook through the 2018 fiscal year envisages that, although sluggishness is expected to remain in exports and production for the time being, domestic demand is likely to follow an upward trend, with a virtuous cycle from income to spending being maintained in both the household and corporate sectors, while exports are expected to increase moderately on the back of emerging economies emerging from their deceleration phase. Thus, Japan's economy is likely to enjoy a trend of moderate expansion
Read more

The Japanese Government issued an energy outlook in July 2015 projecting Japan's future energy mix in the wake of the March 2011 nuclear power plant accident. This policy proposal presents five perspectives that will be essential in making the government’s energy outlook substantive and realistic
Read more

High Efficiency With A Small Investment

Many countries have complex education systems, with types of schools ranging and varying depending on the goals and abilities of the student. Similarly, in Japan, there are multiple different types of schools and universities, for students looking for degrees, vocational qualifications, language ability, professional training, etc
Read more

Some restaurants in Japan have low tables and cushions on tatami floor instead of (or in addition to) Western-style chairs and tables. Shoes and...
Read more

With the support of the government of Japan, and in partnership with UNDP, Serbia is now better prepared to face future threats – both at the municipal level and in terms of the overall response to future crisis management in the case of disasters
Read more

Yoshifumi Kanno, First Secretary at the Embassy of Japan

Citizens and their interest in learning new things about Japan or Serbia give us the chance to promote our cultures with each other, to promote our countries and strengthen our bonds
Read more

What is most important for members of the Japanese Business Club, but also all other investors, is macroeconomic stability, in terms of the predictability and stability of the business environment
Read more

Higher seizures of illegal tobacco contributed to an almost 20 per cent increase in tobacco excise collection in the first nine months of 2015, in comparison to same period last year. Further law enforcement measures should be followed by effective action taken by prosecutors and courts
Read more