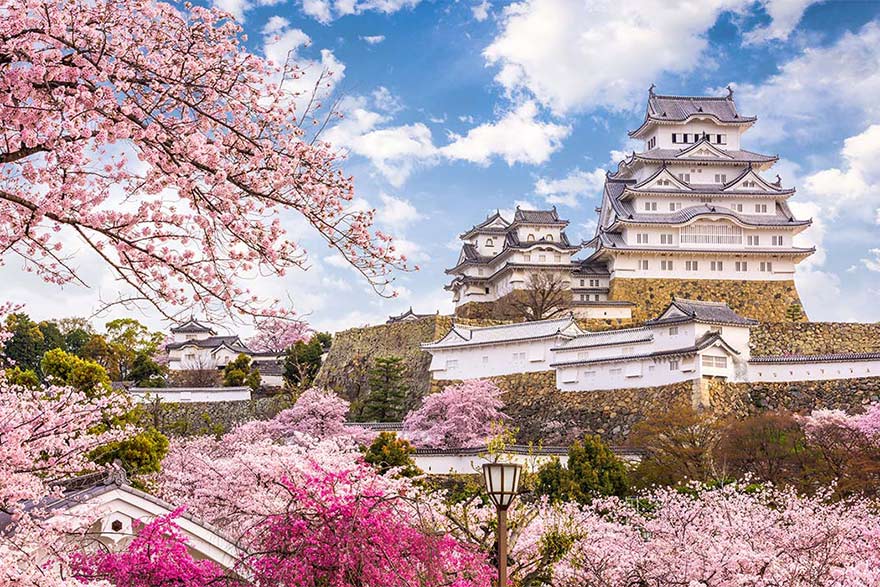 Fortresses have been built in Japan since ancient times. A particular need for castles arose in the 15th century after the central government’s authority had weakened and Japan had fallen into the chaotic era of warring states (sengoku jidai). During that era, Japan consisted of dozens of small independent states that fought each other and built small castles on top of mountains for defensive purposes

When Oda Nobunaga reestablished a central authority over Japan in the second half of the 16th century, and his successor Toyotomi Hideyoshi completed the reunification of Japan, many larger castles were built across the country. Unlike the earlier castles, they were built in the plains or on small hills in the plains, where they served as a region’s administrative and military headquarters and a symbol of authority. They became the centres of “castle towns”.

After the end of the feudal age (1868), many castles were destroyed as unwelcome relics of the past or were lost in World War II. Only a dozen “original castles”, i.e. castles with a main keep that dates from the feudal era (before 1868), survive today. Furthermore, several dozen castles were reconstructed over the past decades.

Due to its beauty and extraordinarily good preservation, Himeji Castle was the first UNESCO World Heritage Site listed in Japan, in 1993. That same year, the government of Japan declared Himeji Castle a Japanese National Cultural Treasure.

The five-storey structure is actually just one of 83 different wooden buildings on the site. Its white colour and flying rooflines lend Himeji its nickname, “The White Heron Castle.”

Tens of thousands of tourists from Japan and abroad visit Himeji Castle each year. They come to admire the grounds and keep, including maze-like paths winding through the gardens, as well as the lovely white castle itself.

Fushimi Castle, also known as Momoyama Castle, was originally built in 1592-94 as a luxurious retirement home for warlord and unifier Toyotomi Hideyoshi. Some 20,000 to 30,000 workers contributed to the construction effort.

When died in 1912, he was buried at the original site of Fushimi Castle. In 1964, a replica of the building was constructed out of concrete at a site close to the tomb. It was called a “Castle Entertainment Park,” and contained a museum of Toyotomi Hideyoshi’s life.

The concrete replica/museum was closed to the public in 2003. Tourists can still walk through the grounds, however, and take pictures of the authentic-looking exterior.

Nagoya Castle is a flatland castle. That is, it was built on a plain, rather than on a more defensible mountain-top or riverbank. The shogun Tokugawa Ieyasu chose the site because it sat along the Tokaido highway, which linked Edo (Tokyo) with Kyoto. As many as 200,000 workers spent six months building the stone fortifications. The donjon (main tower) was completed in 1612, and construction of the secondary buildings continued for several more years.

Nagoya Castle remained a stronghold of the most powerful of the three branches of the Tokugawa family. The Imperial family took over the castle in 1895 and used it as a palace. In 1930, the Emperor gave the castle to the City of Nagoya. On 14th May 1945, an American fire-bombing raid scored a direct hit on the castle, burning the majority of it to the ground. Only a gateway and three corner towers survived. Between 1957 and 1959, a concrete reproduction of the destroyed portions was constructed on the site.

The Gujo Hachiman Castle in the central Japanese prefecture of Gifu is a mountaintop fortress on Hachiman Mountain, overlooking Gujo town. Daimyo Endo Morikazu started construction on it in 1559, but had only finished the stonework when he died. His young son, Endo Yoshitaka, inherited the incomplete castle. Trouble came to Hachiman Castle in 1868, with the Meiji Restoration. The Meiji Emperor had the castle completely dismantled down to the stone walls and foundations in 1870.

Fortunately, a new wooden castle was built on the site in 1933. It survived World War II intact and serves today as a museum. Tourists can access the castle via cable car. While most Japanese castles have cherry or plum trees planted around them, Gujo Hachiman is surrounded by maple trees, making autumn the best time to visit. The white wooden structure is set off beautifully by fiery red foliage.

The daimyo Kuroda Yoshitaka started to build Nakatsu Castle, a flatland castle on the border of Fukuoka Prefecture on the island of Kyushu, in 1587. The final samurai clan to own Nakatsu Castle was the Okudaira family, who lived there from 1717 until the Meiji Restoration in 1868.

During the Satsuma Rebellion of 1877, which was the last gasp of the samurai class, the five-storey castle was burned to the ground. The current incarnation of Nakatsu Castle was built in 1964. It houses a large collection of samurai armour, weapons, and other artefacts, and is open to the public.

The first castle constructed on the site of the current Okayama Castle in Okayama Prefecture was built by the Nawa clan, between 1346 and 1369. At some point, that castle was destroyed, and the daimyo Ukita Naoie began construction of a new five-storey wooden structure in 1573.

His son Ukita Hideie completed the work in 1597. From 1602, control of Okayama Castle passed to the Ikeda clan in Daimyo Ikeda Tadatsugu was the grandson Tokugawa Ieyasu. Although later shoguns became alarmed at the wealth and power of their Ikeda cousins and reduced their landholdings accordingly, the family held Okayama Castle through the Meiji Restoration of 1868.

In 1384, the daimyo Ashina Naomori began to build Kurokawa Castle in the northern mountain spine of Honshu, Japan’s main island. The Ashina clan was able to hold on to this fortress until 1589, when it was captured from Ashina Yoshihiro by rival warlord Date Masamune. Just one year later, however, the unifier Toyotomi Hideyoshi confiscated the castle from Date. He awarded it to Gamo Ujisato in 1592.

Gamo undertook massive renovations of the castle and renamed it Tsurunga. Local people continued to call it either Aizu Castle (after the region it was located in) or Wakamatsu Castle, however.

In 1874, the Meiji government demolished Tsurunga Castle and razed the surrounding city. A concrete replica of the castle was built in 1965; it houses a museum.

Between 1496 and 1533, a large temple called Ishiyama Hongan-ji emerged in central Osaka. The people of the surrounding region looked to the temple for safety whenever warlords and their armies threatened the Osaka area. This arrangement continued until 1576, when the temple was besieged by warlord Oda Nobunaga’s forces. Three years later, Toyotomi Hideyoshi began building a castle on the site, modelled on his patron Nobunaga’s Azuchi Castle. Osaka Castle would be five stories tall, with three subterranean levels, and flashy gold-leaf trim. Between 1629 and 1868, Osaka Castle saw no further warfare. The Tokugawa Era was a time of peace and prosperity for Japan.

However, the castle still had its share of troubles, as it was struck by lightning three times. In 1928, Osaka Mayor Hajime Seki organised a fund drive to restore the main tower of the castle. He raised 1.5 million yen in just six months. The construction was finalised in November 1931; the new building housed a local history museum dedicated to Osaka Prefecture. This version of the castle was not long for this world, however. During World War II, the U.S. Air Force bombed it to smithereens. To add insult to injury, Typhoon Jane came through in 1950 and caused enormous damage to what remained of the castle. The most recent series of renovations to Osaka Castle began in 1995 and finished in 1997.

Train stations are uniquely romantic places. Perhaps it’s all those tearful goodbyes and joyous reunions, each one subtly different and personal. But behind these...
Read more

With Florence, Rome and Venice (and that is just three of the most obvious ones) Italy boasts some of the most beautiful and rewarding...
Read more