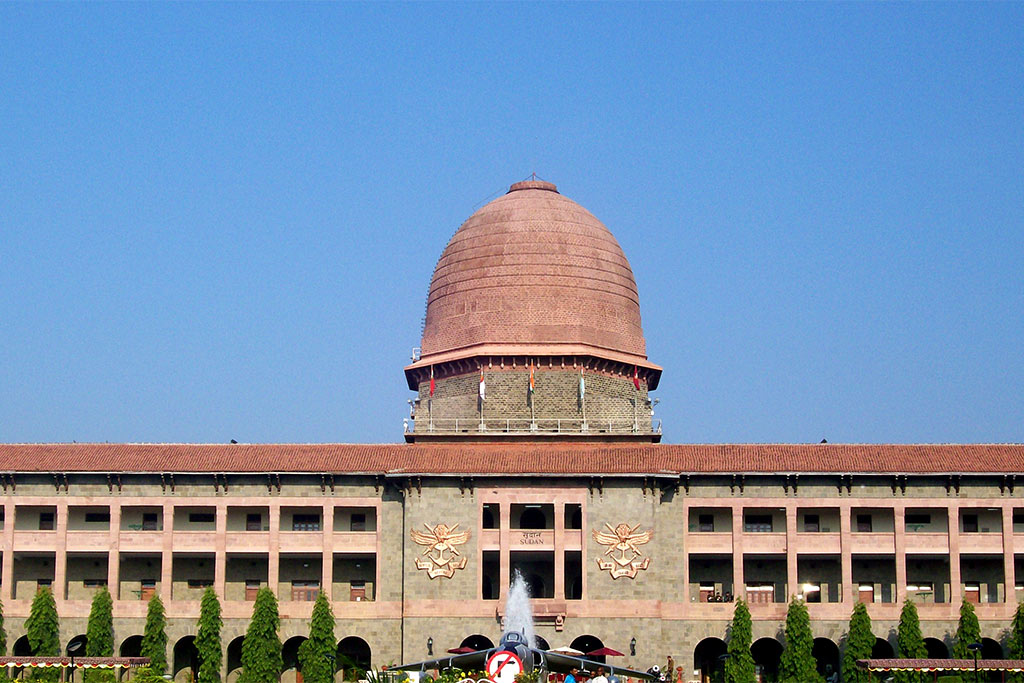 One of the most prestigious military training institutions in the world, the National Defence Academy (NDA) shapes bravehearts who serve all three wings of the Indian armed forces – army, navy and air force. Here we provide a deeper insight into the philosophy of the academy, the facilities it provides and how it instills discipline, empathy and camaraderie in its cadets, turning them into world-class military officials

One of the premier and highly-decorated military training institutes in India, the National Defence Academy (NDA) was founded on 6th October, 1949. It was among the ﬁrst training academies in the world that sought to train cadets for the Army, Navy and Air Force with specialised training for each service. The institute was also the result of an attempt to create a separate ideology and Indianisation of the Indian Armed Forces after Independence.

Hence, combined academic instructions and military training from the formative stage were considered essential. It was an important decision as at that time, neither the UK nor the US had similar training academies. Built at the base of the Sinhagad Fort in Pune that stands testimony to the courage and sacriﬁce of Tanaji (the general of Maratha ruler Shivaji’s army) during a battle against the Mughals in 1670, the NDA embodies fearlessness and valour. Inaugurated on 15th January, 1955, it nurtures in cadets a spirit of service and sacriﬁce in the line of duty for the nation.

An important structure at NDA is the Hut Of Remembrance, a hallowed memorial ground where the academy honours its brave alumni. The names and squadrons of the alumni who have sacriﬁced their lives for the nation are wriUen in stone here. Learning to respect and pay homage to the martyrs is an essential part of training. The NDA campus is spread over 8,200 acres and houses a variety of flora and fauna. A number of trees were planted during the initial construction of the academy. To this, each newly-inducted cadet adds a plant and bears its responsibility during his three-year training period.

The NDA is one of the ﬁnest military training academies in the world. Initially, training patterns of West Point (United States Military Academy) were followed to train NDA cadets, but the patterns have changed dynamically over the years to meet Indian challenges. There is no better proof of good military training than its results in war, and the number of NDA alumni who have attained glory while leading from the front in every military campaign India has been a part of, speaks volumes of the training imparted at the academy. When cadets pass out of NDA, they not only possess the qualities of a responsible oﬃcer but also emerge as compassionate human beings as values like empathy, solidarity and kindness are imparted to them. The underlying philosophy of training at the NDA is jointness (inter-service cooperation) – living, studying and working together, understanding joint organisations, administration, capabilities and limitations of services, and tackling problems together. Cadets undergo outdoor training, engage in games and embark on adventure activities together as a group, thereby imbibing the squadron spirit. Joint training is an integral aspect of training at the academy.

The NDA is one of the finest military training academies in the world. Initially, training patterns of West Point (United States Military Academy) were followed to train NDA cadets but over the years, the patterns have changed dynamically to meet Indian challenges

The objective, for a cadet, is to imbibe and appreciate the functioning of the three services and the inter-service cooperation between them through military education and training programmes. Orientation towards this begins from the ﬁrst term. The three-year course consists of combined service training for the ﬁrst two years and in the last year, a part of the training consists of individual service training. Cadets, during their last semester, visit service establishments to see how they operate and get a ﬁrst-hand knowledge of their future work ethos. NDA boasts a number of engaging clubs too – riding, polo, shooting, golf, painting, hiking, flying, sailing, photography, cycling and more. It is compulsory for every cadet to be a part of at least one club. He can even change clubs every six months to diversify his skills.

Academic studies are carried out under the guidance of Jawaharlal Nehru University (JNU), New Delhi. Syllabuses for BA, BSc (Chemistry and Computer Science) and BTech have been made in conjunction with JNU. BTech is mandatory for Naval and Air Force cadets as it helps them in understanding the technology they will have to work with during their service. Classrooms in the academy are equipped with the latest technologies and the labs are set up in conjunction with IIT Mumbai. Several topics taught at the NDA are drafted to include examples from a military point of view, which makes understanding of military history and allied subjects relevant for the cadets. The NDA is connected on the National Knowledge Network (NKN) and e-learning facilities are available, which was put to good use during the Covid-19 period.

Training at the NDA is a prestigious experience and a matter of pride, a reason why several countries across the world send their cadets to train at the academy. This training outreach extends to Asia, Southeast Asia, Africa and more. Over the years, cadets from 33 countries have trained at the NDA. In fact, of the 284 cadets who graduated from the institute in 2019, 20 were from Bhutan, Tajikistan, the Maldives, Vietnam, Mauritius, Afghanistan, Sri Lanka and Myanmar. Presently, cadets from 16 countries are training at the NDA. Most foreign cadets who have trained at the NDA have gone to reach higher ranks in their services in their countries. Their induction enriches both them as well as Indian cadets. While foreign cadets learn about Indian culture and arts, Indian cadets assimilate areas of excellence like cross country and boxing, etc. NDA also has a regular exchange programme with foreign military academies.

To maintain the pristine environment of the academy, cadets commute on cycles that are provided on their arrival. The vehicle not only keeps the cadets ﬁt but also furthers NDA’s ‘Carbon Neutral’ philosophy. While solar power is utilised for heating water, LED lights illuminate the academy. With tree plantations and voluntary cleaning of the nearby Khadakwasla Lake, the essence of serving the environment is imbibed by each cadet, which they put to use wherever they serve their duty as oﬃcers.

The NDA is one of the few inter-service training institutions in the world that has stood the test of time and provided a continuous flow of aspirants into the three services. The rapidly-changing technology levels and military concepts have necessitated an evergrowing need for inter-service cooperation and esprit de corps, which have been the bedrock of NDA training. The training imparted at the NDA has not only lived up to the vision of our founding fathers but continuously evolved to meet their stated aim of keeping the country safe and secure following the institute’s moUo of ‘Seva Paramo Dharma’ (Service Before Self).

AIR MARSHAL TS RANDHAWA
Air Marshal TS Randhawa is an alumnus of the NDA. Commissioned into the Flying Branch of the Indian Air Force in 1972, he was a founding member and the Leader of ‘Thunderbolts’ the IAF 9 aircraft Formation Aerobatics Team. A former Commandant of NDA, he was awarded the Param Vashisht Seva Medal and the Vayu Sena Medal for his distinguished service.

The price of gas in Europe rose above $2,450 per 1,000 cubic meters for the first time since 8 March, according to data from...
Read more

China has developed a new weather modification drone system capable of detecting clouds, rain, winds and aerosols in the air along its flight path. According...
Read more

A delegation of the US Congress arrived on an unannounced visit to Taiwan, less than two weeks after the official arrival of Speaker of...
Read more