Responsible Business Conduct Abroad: Canada’s Strategy For The Future (2022 To 2027)

As India’s Ambassador to Serbia, it will...
Read more

An initiative of the government of India...
Read more

India: The Engine Of Global Growth

Having successfully organised seven constructive summits, Government of Gujarat, the land of Gandhi and Patel, organised the 8th edition of the Vibrant Gujarat Global Summit from the 10th to 13th of January 2017 at Mahatma Mandir, Gandhinagar. The central focus of the Summit was “Sustainable Economic and Social Development”. It brought together heads of states and governments, ministers, leaders from the corporate world, senior policymakers, heads of international institutions and academia from around the world

The three-day summit was opened by Prime Minister of India Narendra Modi who promised to bring a paradigm shift in polity and economy by providing corruption-free regime and easing processes to make India the easiest place to do business. Addressing the biannual Vibrant Gujarat Global Summit, dubbed ‘Davos of the East’, that had global leaders in attendance, including President of Kenya Uhuru Kenyatta, President of Rwanda, Paul Kagame, Prime Minister of Portugal, Antonio Costa, PM of Serbia, Aleksandar Vucic, Deputy PM of Russia, Dmitry Rogozin, first Deputy PM and Minister of Culture and National Heritage, Poland, Poitr Glinski. Modi said creating an enabling environment for business and attracting investments is his top priority.

“We have placed the highest emphasis on Ease of Doing Business,” he said. “My government is strongly committed to continuing the reform of the Indian economy.” Over the last two-and-a-half years, the government has worked relentlessly to realise India’s potential and to set right the economy, he said, adding the results have been encouraging in substantial improvement in key macroeconomic indicators like GDP growth, inflation, fiscal deficit, current account deficit as well as foreign investments.

“India has become the fastest-growing major economy in the world. Despite the global slowdown, we have registered excellent growth. Today, India is a bright spot in the global economy. We are seen as the engine of global growth,” he said.

Stating that highest emphasis has been placed on Ease of Doing Business, he said decisive steps to ease licensing processes and rationalise provisions and procedures relating to clearances, returns, and inspections have been taken. 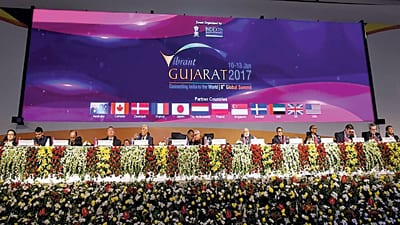 “We are monitoring the implementation of hundreds of action points across various sectors, aimed at improving the regulatory framework. This is part of our promise of Good Governance,” he said.

As India moves closer to global best practices, the government’s confidence has been boosted by the positive impact of our policies and practices. “This also gives us the motivation to further simplify our processes to become the easiest place to do business,” he said.

“Every day, we are further rationalising our policies and procedures, to make it simple for businesses to establish and grow,” he said. “We have liberalised our FDI regime in many sectors and in various ways. India is today among the most open economies.”

The Prime Minister said the total FDI inflows since May 2014 have touched USD 130 billion, reflecting the confidence of foreign investors in the Indian economy.

Listing out initiatives taken by his government in last two-and-a-half years to improve the business climate in the country, he said Goods and Services Tax (GST) is in the offing while Insolvency and Bankruptcy Code, a National Company Law Tribunal, a new arbitration centre for dispute resolution and a new IPR regime are all in place.

New commercial courts have also been set up.

Stating that these are just a few examples of the direction of his government, he said, “My government is strongly committed to continuing the reform of the Indian economy.”

“Our Government was elected first and foremost on the promise to provide clean governance and end the prevailing regime of corruption and nepotism.

“It is our vision and mission to bring a paradigm shift in the ways of our polity and economy,” he said.

India has become the fastest growing major economy in the world. Despite the global slowdown, we have registered excellent growth. Today, India is a bright spot in the global economy. We are seen as the engine of global growth

Stating that his government has taken a series of decisions and steps to provide clean governance, he said the focus is to shift from “relation based Governance to system based Governance”, from “discretionary administration to policy-based administration”, from “random interference to technological intervention”, from “favouritism to level playing field” and from “informal economy to formal economy.” Prime Minister said he has emphasised the need for policy-driven Governance and use of technology to bring speed and openness in decision making.

“Towards this end, we are working to adopt and absorb newer technologies, to bring about transparency, and to end discretion. Believe me, we are on the threshold of becoming the world’s most digitised economy. Most of you wanted this change in India. I am proud to say that it is happening before you,” he said.

While India is the fastest-growing major economy in the world and is called the bright spot, World Bank, IMF and other institutions have projected even better growth in the coming days.

“In 2014-15, India contributed 12.5 per cent of global growth. Its contribution to global growth is 68 per cent higher than its share of the world economy,” he said.

Modi said creating an enabling environment for business and attracting investments is his top priority to create opportunities for youth.

“With that spirit, we are moving towards the implementation of some historic initiatives. This includes the Goods and Services Tax,” he said. The efforts of the government have resulted in improvement in India’s global rankings.

These include improvements in the World Bank’s Doing Business Report, being ranked third in the list of top prospective host economies for 2016-18 in the World Investment Report 2016 released by UNCTAD and improvement in rank by 32 positions in World Economic Forum’s Global Competitiveness Report 2015-16 and 2016-17.

Also, India has moved up 16 ranks in the Global Innovation Index 2016 brought out by WIPO and jumped 19 positions in the World Bank’s Logistics Performance Index of 2016.

“This change in the environment has been recognised by both domestic and foreign investors. An encouraging Start-up ecosystem is now taking shape in the country,” Modi said.

Our biggest strength is the depth of our Democracy. Some people say that democracy cannot deliver effective and fast track governance. But we have seen in the last two-and-a-half years that it is possible to deliver quick results in a democratic set up as well

Stating that $130 billion FDI had come during last two and half years, he said the FDI equity inflow in the last two financial years was 60 per cent higher as compared to previous two financial years. “In fact, the total FDI inflows received during the last year have been the highest ever.” Also, the number of countries from where FDI is coming in and the sectors in which they are being routed have also diversified in the last two years.

“India is now the leading recipient of capital investment in the Asia-Pacific. It also continues to be among the top ten countries globally in terms of FDI inflows,” he said. “But the story does not end here. India has left every other country behind in terms of providing a return on investment. In 2015, India has risen to the first position in the Baseline Profitability Index.” 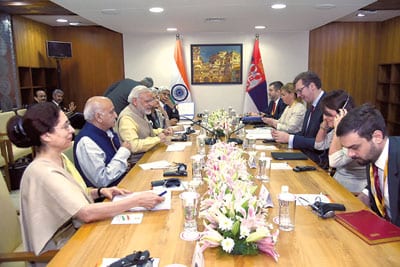 India, he said, has become the 6th largest manufacturing country in the world, up from 9th largest previously.

“All this is helping us expand the job market and raise the purchasing power of our people. But the real potential is even higher,” he said.

“We are committed to an India with better job opportunities, better income, better purchasing power, the better quality of life and better living standards,” he said.

The government’s development agenda is to provide a roof over every head, jobs to every hand, an energy that is cleaner, build roads and railways faster, mineral exploration to become greener, build urban amenities that are sturdier and see the quality of life getting better and better.

“Our biggest strength is the depth of our Democracy. Some people say that democracy cannot deliver effective and fast track governance. But we have seen in the last two-and-a-half years that it is possible to deliver quick results in a democratic set up as well,” he said.

Also, the culture of healthy competition among states has been evolved and they are being rated on parameters of Good Governance.

With the second-largest English population, the youth of India is not merely looking for jobs but are beginning to take risks and become entrepreneurs.

On the demand front, the rising middle class offers a huge domestic market, he said.

With sea that connects it to the world’s biggest markets of Africa, the Middle East and Europe, three crop seasons giving an abundance of food, vegetables and fruits, and unparalleled flora and fauna.

“We are taking a leap towards next-generation infrastructure: in both core and social sectors; in both rural and urban areas.

India is going to emerge as one of the world’s largest construction markets as it adds millions of homes. All this offers unprecedented opportunities for the investor community

“This includes freight corridors, industrial corridors, high speed and metro rail projects, logistics parks, smart cities, coastal zones, regional airports, water, sanitation and energy initiatives. Our per capita electricity consumption must rise. Even as we do so, we are committed to promoting renewable energy,” he said.

The government, he said, is also keen to promote tourism in a big way, for which tourism infrastructure is needed.

“The targets for construction of roads and laying of railways have been increased manifold. India is going to emerge as one of the world’s largest construction markets as it adds millions of homes. All this offers unprecedented opportunities for the investor community,” he said.

India, he said, alone offers the opportunities that could rival those of an entire continent. “It offers today, the possibilities of a full century. And we want to do all this in a cleaner, greener and sustainable way.”

Asking global investors to invest in India, he said: “I assure you that I will be available to hold your hands whenever required.”