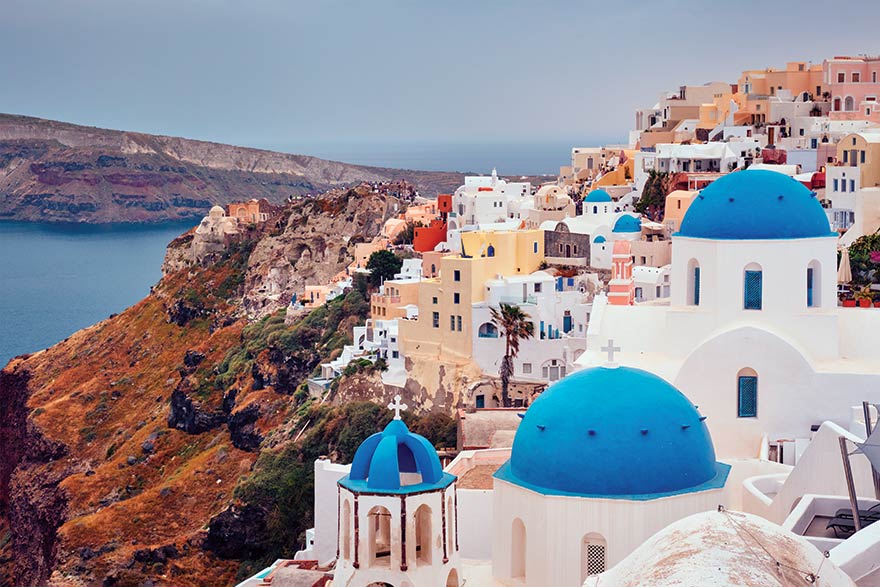 Greece Is Everything You Desire

It is known for its unique rocky landscapes, beautiful pristine nature, endless shores and beaches, as well as 1,400 indescribably beautiful islands. Yes, it’s Greece! Apart from a rich history, sun and sea, tourism represents a basic characteristic of this amazing country’s past and present

We hope that we will open the door to foreign tourists from 14th May, under the condition that they’ve either been vaccinated against COVID-19, or have antibodies or a negative test – said Greek Tourism Minister Harry Theocharis, inviting visitors from all over the world as he highlighted the slogan “All you want is Greece”.

“This year and forever, all you want is Greece. To put a smile back on your face again, with the hope that you will take back life, all you want is Greece,” said Greek Tourism Minister Harry Teocharis, speaking in his address to the ITB 2021 international tourism exhibition, which was held in an online format.

Addressing potential visitors, Theocharis stressed that Greece is ready to welcome them from 14th May, provided they meet one of three conditions: that they’ve been vaccinated, have antibodies or have a negative COVID-19 test. The country’s borders should open for Serbian citizens as of 1st May, under one of these three conditions.

The Greek tourism sector relies almost entirely on foreign visitors, with the highest numbers of guests coming from Germany and the UK, because Greece and the Greek islands are known for three things: ancient civilisation, amazing landscapes and well-established tourism.

TOURIST NUMBERS EXCEEDED 31 MILLION PRIOR TO THE PANDEMIC

Greece is among the main tourist destinations and attractions in Europe, thanks to its rich culture and history, which are reflected in its 18 UNESCO World Heritage Sites, and thanks to it having the longest coastline, beautiful islands and even more beautiful beaches. That’s why it’s no surprise that in the pre-pandemic year of 2019 it welcomed more than 31,300,000 visitors, which ensured Greece was one of the most visited countries in Europe and worldwide.

Tourism in modern Greece began flourishing in the 1960s and ‘70s, when a huge number of hotels and other accommodation and infrastructure facilities were built. Events of planetary importance held in Athens, such as the 2004 Summer Olympics and the 2006 Eurovision Song Contest, had a great impact on strengthening the country’s tourism industry. But the turning point came back in 1994, which was the first year that the number of people opting to visit Greece and its islands exceeded 10 million.

ARCHAEOLOGICAL SITES REVEAL THE PAST

Greece boasts hundreds of archaeological and historical sites that provide perfect depictions of the country’s past. Greeks are particularly proud of their culture and are very passionate when speaking about their country, with their feeling that the culture of Greece is the very definition of their national and ethnic identity. This means that, if you want to understand this country, you must acquaint yourself with its traditions, religion, music, language, food and wine during your visit.

Greece is so rich in culture and beauty that you will never explore it fully, no matter how many times you visit. That’s one of the reasons why this country is included on the list of the world’s 20 best holiday destinations. Everything that exists in Greece – from its nature, beaches and inhabitants, to local specialities – compels people to return again and again to this wonderful country every summer.

IT HAS 1,400 ISLANDS, EACH MORE BEAUTIFUL THAN THE LAST

The country has a population of around 11 million, four million of whom live in the capital of Athens. This mountainous peninsula is located on the eastern side of the Mediterranean Sea. Encompassing a total area of 130,800km2, the country is surrounded on three sides by the sea, while its northern side borders other Balkan countries. Thanks to its many islands in the Aegean and Ionian Seas, as many as 1,400 of them, around 200 of which are inhabited, Greece has the longest coastline in Europe and the fifth longest in the world.

Some of the most popular island resorts include Mykonos, with its cosmopolitan character, Santorini, which offers the world’s most romantic sunset, and Rhodes, an island of medieval castles, sun and butterflies.

There is also Crete, with its revolutionary spirit, Ios, with its wild nightlife, Corfu, with its Venetian style, and Ithaca, the homeland of Ulysses. Other obligatory destinations include Samos, the greenest of all Greek islands, and Skiathos, with its long, sandy beaches. And these are just a few examples of its heavenly bathing areas.

Greece is world famous for its amazing beaches. Whether sandy or pebble, popular or hidden, beaches in Greece will satisfy even the most discerning tourists. The most remarkable beaches are in the Cyclades and Ionian Islands, such as Myrtos Beach on Kefalonia, Navagio Beach on Zakynthos, Porto Katsiki Beach on Lefkada and Super Paradise Beach on Mykonos. Greek beaches are ranked among the most beautiful and cleanest beaches in the world every year.

Apart from beautiful beaches, Greece also has traditional and picturesque villages with architecture that varies depending on the geographical location.

For example, the villages of the Dodecanese islands have a medieval style, while the villages on the mainland have an earthen hue. Regardless of how they look, every Greek village is well supplied with basic necessities, while tourist centres can boast of having all kinds of shops – from mini-markets and small shops with traditional products to branded outlets with expensive items and designer collections. Apart from not being able to resist swimming, sunbathing and shopping, tourists also can’t help but try some Greek specialities. The cuisine of this country is comprised of dishes dating back to the time of the ancient Greeks, based on olives, figs, cheese and honey, traditional dishes like moussaka and roast lamb, but also modern cuisine.

Although Greece is primarily the number one summer destination, with tourists flocking there to swim, sunbath, enjoy beautiful beaches and tour cities and archaeological sites, this country is a wonderful place to visit 365 days a year.

Admit it … all you want is Greece, right?

No Recognition; Support For Dialogue

Always A Step Ahead

Alumil Yu Industry, which produces high quality aluminium systems, ranks second in its group in terms of size, behind only the parent company in...
Read more

The White Dancing Horses Of Vienna

In Austria, the window to another era is provided by the Spanish Riding School. It is a living form of Renaissance art, an institution...
Read more

The Spirit Of France In Belgrade

Over the course of less than five years of operations, Mama Shelter Belgrade has managed to set itself apart as one of the most...
Read more