The Incredible Blue Caves of Greece

Greece is a country teeming with beauty. Its key feature though is the endless summer, the blue sky and the blue sea. Each year people flock to Greece’s exquisite beaches, both on the islands and the mainland coast, seeking the life-giving sun and the crystal clear blue sea

As Greece is a country with rich geological structure and evolution, thousands of subterranean and underwater caves have been formed both in the mainland and the islands. Systematic explorations by geologists and speleologists all around the country have brought to light more than 8,500 caves, many of which are still unexplored.

A large number of caves in Greece is because of the huge quantities of limestone covering about 65% of the surface. Greece has a plethora of natural wonders, and the country’s famous blue caves are no exception. These are the best places where sun, sea and earth combine to create a blue wondrous spectacle.

The legend behind Melissani lake cave in Kefalonia says that it was named after a heartbroken nymph, Melissani, who took her own life when spurned by the god Pan. It lies 2 km outside Sami and regularly features on lists of the most beautiful natural attractions in the world.

To reach the lake, visitors descend through an underground passage; it is after this that the fun really begins. A boat ride takes you to the centre of the cave, which was originally composed of two chambers. The roof collapsed thousands of years ago following an earthquake, creating a natural window through which sunlight floods in and paints the waters with an array of blue tones.

It’s a miraculous sight – made even more magical by the tranquillity of gliding across the lake in the little oar-powered boats. No sounds of engines to disturb your peace here; it’s just you and the splash of oars against water.

The cave itself was discovered in 1951 and its stunning stalactites have been estimated to date back to over 20,000 years. At the centre of the lake, a little island emerges, where evidence of worship of the god Pan was uncovered in previous decades.

What sets this (lake) cave apart from sea caves is that it benefits from a contrast: there is the crystal blue water below, and lush greenery growing at its summit, which is a breathtaking, visual delight. Visit between 11 am – 1 pm for the full effect of the light playing on the water.

Lefkada is famous for its turquoise waters and its white sandy beaches, which get their colour thanks to the island’s abundance in limestone. These limestone rocks, in turn, have given way to many caves dotting the island’s shores.

The little island of Meganisi, located just 12 nautical miles to the east of Lefkada, is home to Papanikolis cave. This beautiful cave takes its name from a submarine that was hidden there during World War II. The cave provided shelter to boats of all sizes during bad weather, as well as to locals hiding from pirates and other marauders. Today, it’s simply a beautiful place to visit.

Its sheer size is impressive. It is the second-largest sea cave in Greece, and it measures 120 meters in length and 60 meters in width. Inside, you’ll be treated to the dazzling sight of sunlight dancing and bouncing off the crystal clear waters, which cast their mesmerizing blues all over the cave walls and stalactites.

For those unable to resist plunging into the waters: you’ll be rewarded for braving the cold by a rest on the little sandy beach at the far end of the cave.

The blue cave of Kastellorizo is the island’s most famous attractions, and undisputedly one of the most stunning blue caves in Greece. The inside is 75 meters long, 40 meters wide and 35 meters high, but from the outside, you almost can’t see it at all.

Reaching it is a little tricky ‒ the entrance is a meter or so high, so you need a small boat, calm seas and steady nerves.

But it’s worth it. Inside, the sunlight is refracted through the water, scattering the light and turning the sea into a pool of vibrant turquoise blue so beautiful that visitors have described it as overwhelming.

The best time to visit is in the morning when the sun is low and the full glory of its interaction with the water can be appreciated. It’s no wonder that Tripadvisor lists a visit to the Blue Grotto as the number one thing to do on the island.

One of the best-known sights of the island, located in the north, these are not caves in the strict sense of the term, but rather the remnants of caves worn away by the water, leaving behind natural limestone formations. It was discovered in 1897 by Antonio Komouto, and since then visitors have been flocking to see it.

The highlight of any visit is when the captain gently guides the boat right through the white arches, pausing to allow visitors to appreciate not just the blue waters, but the way they taint the limestone in their colours, painting everything around them in a stunning, ethereal blue (including you!). To get the full effect, visit between morning and noon.

The coastline of Alonnisos is wild and rocky, featuring many little caves and formations. Located near the island’s marine park at the northeast, between the beaches of Strovili and Lalarias, lies the most famous cave: the Blue Cave. 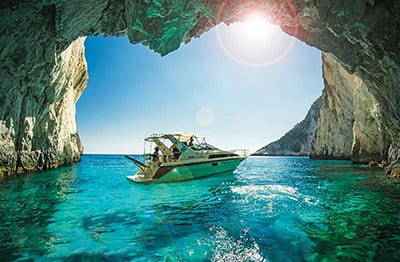 It is a white triangular limestone cave, framing the dazzling blue waters, the colours of which shift into an endless spectrum of shades as the sun moves across the sky. Pause for a swim and enjoy waters so clear you can see right to the bottom.

One of the biggest advantages, not just of this enchanting little cave but of Alonnisos in general, is that it remains a relatively unknown destination for tourists. This means that –unlike the case for most other blue caves in Greece – you’re likely able to appreciate it in the company of very few visitors.

Grotto Keri (Keri Caves) are often also called Marathia Grottos because they are located on the southern and south-western part of the Keri peninsula near the village of Marathia. Caves are inaccessible from the seashore and are closed in the cliffs, which can be accessed from the sea. Excursions to the caves are organized mainly from towns located in the southern part of the island (Laganas, Agios Sostis, Limni Keriou).

Keri caves are smaller than the Blue Grotto on the north of the island, but they have pros – they are closer (no need to travel to the northern villages to get to the caves), have significantly fewer ships swimming there and the caves and cliffs in which they are located are beautiful (Headland Keri is one of the highest cliffs on the Island of Zakynthos).