German Economy Should Continue to Grow

According to Deutsche Bundesbank’s monthly report for August 2016, the German economy grew at a slower pace in the second quarter of 2016. The Federal Statistical Office’s flash estimate, that real GDP in the second quarter rose by a seasonally and calendar- adjusted 0.4% on the quarter, after recording a steep 0.7% increase in the first quarter. However, the economy should continue to grow in the third quarter in line with the fairly robust underlying cyclical upthrust.

Aggregate capacity utilisation, therefore, at an above-average level. The weaker economic momentum was mainly attributable to a clear drop in investment in both machinery and equipment and in construction. Private consumption also grew less strongly than at the beginning of the year.

By contrast, the outcome of the referendum on the United Kingdom’s continued membership in the European Union (EU) did not appear to have had any effect on the German economy in the second quarter. The future impact of the referendum result will – at least in the short term – probably also be quite minimal.

The weaker demand for new machinery and equipment probably represents a natural rebound from the surge in investment at the beginning of the year. Another possible factor is that industrial activity has not yet experienced a sustained recovery. For its part, the downturn in construction investment was largely due to weather-related factors, after exceptionally mild temperatures in the winter months had allowed additional building output in the first quarter.

The slower pace of private consumption may also owe something to the turnaround from falling to rising oil prices, as this cancelled out the previously realised gains in purchasing power. On the other hand, the fairly robust export momentum had a stabilising effect on overall economic activity.

The key factor here was the greater demand from within the euro area, which was sufficient to offset the sluggish momentum stemming from non-euro-area countries in the second quarter.

German exports proved to be a major mainstay of economic growth in the second quarter. This would indicate that the lull in demand observed in the second half of 2015 has now been overcome. Goods exports were markedly up on the quarter again in price and seasonally adjusted terms, with the regional figures available for April and May pinpointing exports to other euro-area countries as being the main driving force behind the positive result.

Exports to other EU countries declined, however. Here, a sharp drop in the value of exported goods to the United Kingdom stood out in particular, although exchange rate effects probably played a part in this. Outside the EU, German exporters suffered substantial losses in their trade with Russia, but above all with the United States. The latter may have been in connection with the inventory adjustments in the United States, which generally have a strong impact on import demand.

A noticeable increase was, however, recorded in exports to China. Exports to the OPEC countries also recorded strong growth following the period of stagnation at the beginning of the year, possibly in connection with the higher crude oil prices.

Goods exports were markedly up on the quarter again in price and seasonally adjusted terms, with the regional figures available for April and May pinpointing exports to other euro-area countries as being the main driving force behind the positive result

Investment activity tailed off in the second quarter of 2016. This was especially true in the case of machinery and equipment, where a countermovement took place following the brisk start to the year. Enterprises were, among other things, probably more reluctant to invest in their motor vehicle fleets, which would explain the very sharp drop in new commercial motor vehicle registrations following a strong increase in the previous quarter.

Construction investment also lost significant momentum in the second quarter. This, however, was due to a considerable extent to a correction to the weather-related surge in output in the first quarter. On the whole, the construction sector still appears to be in good shape. Seasonally adjusted private consumption was less buoyant in the second quarter than in the first three months of the year.

The underlying economic conditions are still intact, however, owing to the ongoing positive outlook for income and the labour market. Additional support will also be generated this year by rising government transfer payments. The slump in the second quarter was probably due first and foremost to the turnaround in crude oil prices.

Oil prices rose again perceptibly for a time following the sharp decline around the turn of 2015-16, eroding consumer purchasing power. Retail sales went up only marginally and even posted a slight decrease in real terms. Footwear and clothing were the sole exceptions here, the demand for which saw a sharp rise following a lull in the winter months – probably due to the weather. 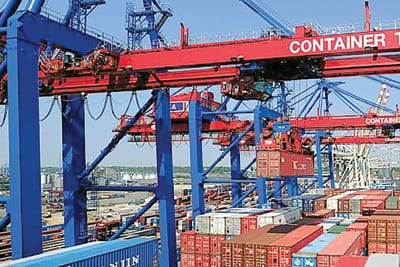 By contrast, passenger car sales are likely to have continued exerting a positive influence on private consumption. This is shown by the increase in the second quarter in the number of new non-commercial motor vehicle registrations for the third period in succession. Imports fell substantially in the second quarter after adjustment for seasonal variations. This reflected the temporary slump in domestic demand. The real decline was stronger than in nominal terms, which was due to the fact that energy prices, and thus also import prices as a whole, rebounded following the slump around the turn of the year.

In regional terms, the decrease in nominal goods imports was quite broadly based. There was much less demand for goods from countries outside the EU, in particular, especially the newly industrialised economies in Asia, Russia, the OPEC countries, the United States and China.

The German economy should continue to grow in the third quarter in line with the fairly robust underlying cyclical upthrust. Despite the low level of new orders received in the second quarter, the mood in the German industry has improved distinctly. Notwithstanding the intense public discussion about the economic implications of the United Kingdom’s announced departure from the EU, German firms have so far only slightly moderated their positive expectations.

Despite the low level of new orders received in the second quarter, the mood in German industry has improved distinctly. This supports the assessment that the economic consequences of the Brexit vote for Germany are likely to be very limited in scope, at least in the short term

This supports the assessment that the economic consequences of the Brexit vote for Germany are likely to be very limited in scope, at least in the short term. German firms’ positive expectations regarding foreign sales suggest that exports, too, will grow solidly in the third quarter. Overall, production by industrial firms should once again make a marked contribution to aggregate growth between July and September. Given that capacity utilisation is already above its average level, this should lead to more investment in machinery and equipment.

Construction investment should also provide a greater impetus in the third quarter after the effects of the weather-related second-quarter bump in building activity have petered out, as is indicated by the positive sentiment and orders situation in the construction sector. In addition, private consumption should once more be a significant driver of domestic economic growth after faltering in the second quarter. Both employees’ income prospects and the labour market situation remain favourable, and the preceding rise in crude oil prices has reversed.

At present, it is difficult to gauge the real economic impact that the UK’s decision to leave the EU will have on Germany. The future framework for economic cooperation is still unclear and the associated negotiations will probably last several years. There might be short-term consequences if, for example, uncertainty causes German enterprises and consumers to postpone investment and spending decisions. 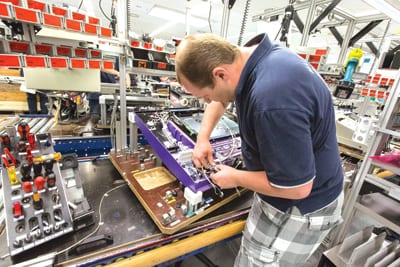 Moreover, according to a special survey conducted by the Chambers of Industry and Commerce,4 most firms in Germany are not planning to scale back their investment or headcount while negotiations between the UK and the EU take place. Consumers also remain confident.

The consumer climate indicator, as estimated by the market research institution Gesellschaft für Konsumforschung (GfK), showed almost no change for August compared to July. The majority of the employees surveyed by the GfK do not fear that the result of the Brexit referendum will put their own jobs at risk.

However, there may be certain consequences for foreign trade already in the short term, since it is being influenced by exchange rate changes and the increased levels of uncertainty in the UK. This uncertainty is depressing demand in the United Kingdom, which in turn is dampening imports – and thus Germany’s exports. Germany exported €89.3 billion worth of goods to the UK in 2015.

The gross value added of these exports is equivalent to around 2% of Germany’s aggregate output, with the automotive sector accounting for the lion’s share. The negative impact of the sharp depreciation of the British pound on German exports is being offset by the positive effects of the euro’s depreciation against many other currencies.

The German economy may also be affected, for example, if the UK’s plan to leave the EU influences foreign direct investment and labour mobility.