A key element of German and European policy towards Serbia is providing support for political and economic reform. The aims are to further advance the process of democratic change and promote the rule of law in Serbia as well as making progress in the country’s European Union (EU) accession process

Germany has been a key partner of Serbia in the EU since the country’s transition to democracy in autumn 2000. In recent years, Germany has become Serbia’s biggest bilateral donor, providing more than €1.6 billion in bilateral development cooperation since 2000. Germany is also providing humanitarian aid to Serbia to help the country deal with the refugee crisis. In addition, there are close ties between Germany and Serbia on account of a large number of Serbs and citizens of Serbian origin residing permanently in Germany as well as former guest workers who were employed for many years in Germany and often have a good command of German. An estimated total of between 300,000 and 500,000 people of Serbian descent currently live in Germany.

Serbia and Germany have different positions on the issue of an independent Kosovo, which is recognised by Germany but not by Serbia. 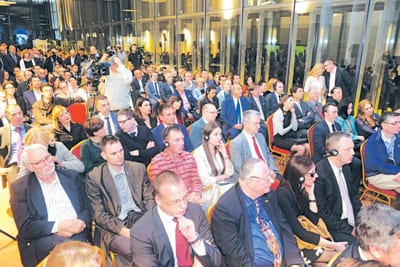 For years, Germany has been among Serbia’s principal economic partners. German companies such as STADA, METRO, Henkel, Siemens, Bosch and Messer have made major investments in Serbia. The German-Serbian Business Association now has more than 250 members. In Belgrade, there is a Delegate Office of German Industry and Commerce for Serbia as well as a local representative of the German business promotion agency Germany Trade & Invest.

Since development cooperation with Serbia began in 2000, the Federal Government has provided more than €1.6 billion, making Germany the largest bilateral donor.

German support has also helped the country make substantial progress, including modernisation of the country’s public utility infrastructure, strengthening of the local economy through programmes to promote small and medium-sized enterprises, modernisation of vocational training measures and improvement of the investment climate through legal reforms.

Germany’s objectives in providing this support include:

There are close ties between Germany and Serbia on account of the large number of Serbs and citizens of Serbian origin residing permanently in Germany, as well as former guest workers who were employed for many years in Germany. An estimated total of between 300,000 and 500,000 people of Serbian descent currently live in Germany

Cultural life in Serbia is rich and wide-ranging and cultural cooperation with Germany is close.

The Goethe Institute in Belgrade offers an extensive and highly attractive programme, with well-attended events such as exhibitions, lectures, concerts and theatre productions. German artists and performers are frequent guests at Belgrade’s theatre, music and film festivals. Events organised by the German Embassy are very well received. Volunteers working for the Federal Foreign Office’s Kulturweit (Bridging Cultures) volunteer programme are also active in Serbia. There is a German Evangelical congregation in Belgrade as well as several German cultural associations.

Another important element of cooperation in academic and scientific exchange. The German Academic Exchange Service (DAAD) has three lecturers working in Serbia, and since 2008 the DAAD has stepped up its activities by launching its Special Programme for Serbia. In October 2008, the DAAD opened its own Information Centre there. Scholarship and exchange programmes meet with keen interest.

In Serbia, 27 partner schools belong to the Schools: Partners for the Future network (PASCH). Besides the German School Belgrade, its members comprise 20 German Language Certificate (DSD) schools overseen by the Central Agency for Schools Abroad (ZfA) and six FIT schools overseen by the Goethe Institute at which German instruction is being established or expanded. Seven seconded teachers/advisors look after the DSD schools and a Goethe Institute Teaching Expert serves the FIT schools.

Some 225 children and young people from Serbia, Germany and other countries are taught at the German School Belgrade, which was founded in 1954. The school was officially recognised as a domestic educational institution by the Serbian Ministry of Education in 2005. In summer 2012, students at the German School were able to take the German university entrance examination (Abitur) for the first time. Germany supports the school by providing both funding and personnel (currently seven foreign-service teachers). The new school building was officially opened on 11th September 2015.