Berlin Vegetarian Capital Of The World

Last year Berlin was named the new vegetarian capital by the prestigious U.S. magazine “Saveur”. The international award from the magazine for food connoisseurs honours the culinary development of the German capital, now home to over 40 vegan and over 340 vegetarian restaurants and snack stands

The vegetarian and vegan lifestyle is becoming more popular every day in Berlin. As of this summer, there are 43 restaurants in the German capital that use no animal products in their cooking. That’s 31 more than five years ago.

More than 340 restaurants in Berlin also feature animal-free dishes on their menus. Vegan ingredients are not only the basis of the latest food trends in the German capital, but the city’s also becoming a centre for designing and making fashion, shoes, and cosmetics without animal products. 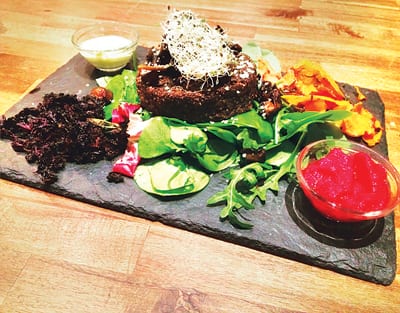 One of the latest trends is raw food. At Rawtastic in Prenzlauer Berg, Berlin’s first raw vegan restaurant, the food is not heated above 42°C. The careful handling of the food ensures that it not only retains its nutritional value but also gains flavour. The menu includes such things as Koodles (noodles made from carrots and zucchini) and a ‘shroom burger made from mushrooms.

Daluma in Mitte works with superfoods with higher nutritional content than other foods. In addition to detoxifying power smoothies, the menu includes dishes based on lentils, pasta, rice, or quinoa. Just a few doors down at Super Foods & Organic Liquids, there are plenty more nutritious things to enjoy on the spot or to take away. Liquid Garden in Prenzlauer Berg, meanwhile, specialises in superfood juices and smoothies.

Clean eating, which focuses on natural, unprocessed food, is offered at The Bowl in Friedrichshain – on a vegan basis. Whether you choose an Italian bowl with vegetable noodles and tomatoes or a Mexican bowl with avocado and corn, every dish is 100% sugar- and gluten-free.

One of the latest trends is raw food. At Rawtastic in Prenzlauer Berg, Berlin’s first raw vegan restaurant, the food is not heated above 42°C. The careful handling of the food ensures that it not only retains its nutritional value, but also gains flavour

Fashionable without animal products: Umasan Healthstyle in Mitte is the world’s first label offering only organic vegan goods under fair trade conditions. Instead of leather, twin sisters Anja and Sandra Umann experiment with innovative fibres. The matching vegan shoes to an outfit can be found at avesu in Prenzlauer Berg.

The latest vegan trends in food and lifestyle can be checked out every year at Berlin’s Vegan Summer Festival held on Alexanderplatz (19th – 21st August), at Green Market Berlin in the old Kindl Brauerei (autumn event being held 17-18 September), and the VeggieWorld trade fair (26th – 27th November) at Station Berlin.

I am glad to come to Serbia, a country with which we have been sharing excellent political, economic and cultural relations for many years....
Read more

One piece of good news is that German companies are extremely satisfied with their investments in Serbia and would consider investing further and again....
Read more

Unfortunately for Ukraine, German companies are relocating from Ukraine to Western Balkan countries in order to build up another nearshoring option not too far...
Read more