Within a framework of daily educational activities...
Read more

With good internal organisation, we’ve succeeded in being available to members at all times, and that will be the same in the future

Even prior to the declaring of a state of emergency in Serbia, we realised that the global health crisis would impact on the operations of our members and partners in Serbia. That’s why we reacted very quickly and took certain actions to forward requests to the Government and ministries to take into account the difficulties faced by companies, especially small and medium-sized enterprises, says Sanja Ivanić, CEO of the French-Serbian Chamber of Commerce .

SMEs comprise a large percentage of French-Serbian Chamber of Commerce members, while they represent the backbone of the Serbian economy and it is vitally important for us to fight for the support of these companies and help them to overcome this difficult period. Our action of sending requests to the Minister of Finance was joined by twelve other bilateral associations in Serbia in a short period of time because they recognised the importance of this initiative, says our interlocutor.

“Under the slogan ‘How can we help you?’ we attempted during the pandemic to organise as many useful online conferences, webinars and club meetings as possible, in order to overcome the newly emerged situation as easily as possible, through joint actions, initiatives and solutions. It is important members know that we’re always here for them,” says Ivanić.

Which needs do members most often cite when addressing you today?

During the strongest wave of the Covid-19 virus, at the end of March and during April, our members contacted us with various inquiries, the majority of which were related to imports and exports, blockages at borders, tougher customs procedures at EU entry points and obtaining work permits for workers during the police curfew.

At the moment members are very interested in whether there are certain restrictive entry and exit measures still in place between Serbia and EU member states, as well as imports and exports. Business meetings and networking are also an important part of our activities, and members ask us when they will be able to start holding meetings in the flesh.

How has the rise in digital forms of communication impacted on the work of the French-Serbian Chamber of Commerce? Has it caused a change in your communication with members and regarding other Chamber activities?

Digitalisation has been a priority of French chambers of commerce abroad for several years now. The global platform that connects members was launched two years ago and is used by an increasing number of members for maintaining contacts with companies worldwide. All our chambers are also users of the zoom platform, so this way of working wasn’t strange to us.

The Chamber was very active during the state of emergency and informed members about the situation in Serbia, but also in France, via regular email-based communications. All our regular activities (members’ meetings, sector-specific clubs, conferences and presentations) were organised fully online and completely free of charge, in order for us to provide members with verified and essential information at the right time. Our team also performed all of its activities from home and was available to members at all times.

What do you consider as a key strength of the Chamber that manifested during Covid-19?

I’m particularly pleased with the speed at which we reacted in a crisis situation – already on the first day of the state of emergency, following consultations with members from the ranks of small and medium-sized enterprises, we wrote to Finance Minister Siniša Mali requesting assistance measures for SMEs. 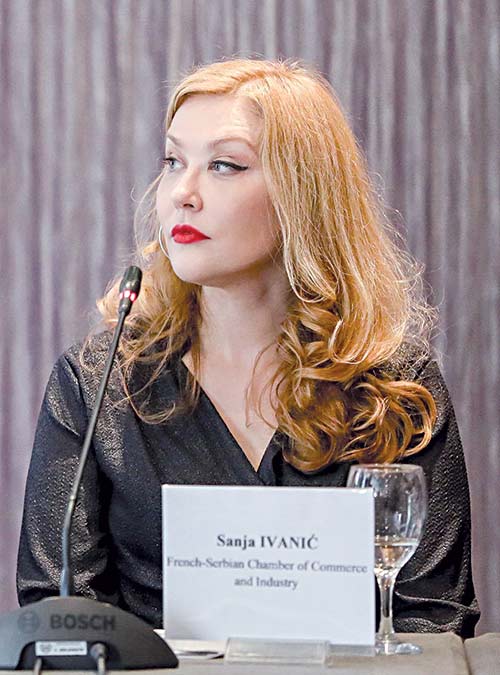 And the key strength of the Chamber that came to the fore during the Coronavirus period was primarily the team spirit of all employees, who worked industriously during the state of emergency to ease the operations of members through sector-specific meetings and the organisation of webinars.

Thanks to being part of the large network of French chambers of commerce abroad, our Chamber organised regional webinars on the topics of agriculture, transport and logistics, and energy, with French chambers of commerce based in the countries of Central and Eastern Europe. These webinars enabled members to see how companies in the region confronted the pandemic, compare experiences and hear the opinions of experts and representatives of institutions.

Several important agreements concerning the economy were signed during 2019, while new projects were also launched. How will the new development of the situation influence the dynamics of these activities?

Last year was of special importance for French-Serbian bilateral relations, because it was marked by the visit of President Macron and because that occasion saw the signing of numerous agreements between Serbian and French institutions and companies. The pandemic certainly has consequences for our bilateral relations, because a drop in economic activity has been recorded, and the number of inquiries we receive from French companies has also decreased.

On the other hand, our large joint projects have suffered hardly any setbacks. At the end of May, an intergovernmental agreement was signed on a donation of 8.3 million euros to Serbia from France, which will enable the completion of feasibility studies for the first phase of the project to build a metro rail system in Belgrade. This signing is a significant and tangible stage in this symbolic and long-term project and shows the commitment of the French government and companies to support Serbia until the completion of this project. Likewise, works on the incinerator in Vinča are progressing, and works on the modernisation and expansion of the airport are unfolding without major delays.

I sincerely hope we’ll have a more stable health situation in the country in November and that it will be possible for us to organise French Week, as we are accustomed to doing. French Week will be opened with the traditional welcoming of Beaujolais Nouveau young French wine, in the presence of the Ambassador of France and members and partners of the Chamber. I believe this will be an opportunity for us to gather in large numbers and open the week by commemorating the French-Serbian friendship and trying to at least end one complicated year joyfully.

How will the CCIFS work in cooperation with colleges this year, and what will happen to the student work placements traditionally offered by French companies?

The French-Serbian Chamber of Commerce last year signed a Memorandum of Cooperation with the University of Belgrade and accordingly initiated, just before the declaration of the state of emergency in Serbia, in cooperation with the University Career Development Centre, a panel discussion for students, “Skills of the Future”, in which panellists included representatives of the Chamber’s member companies who spoke about relevant topics related to employment, skills and abilities that make it easier for young people to secure employment, the impact of new technologies on jobs in the future, and about global connectivity.

As far as the work placements are concerned, we regularly receive CVs of students from Serbia, but also from France, which we regularly forward to members in the case that they need interns. We will continue to connect our members with universities, also through the organisation of an online job fair under the scope of French Week and other events for students, in collaboration with members.