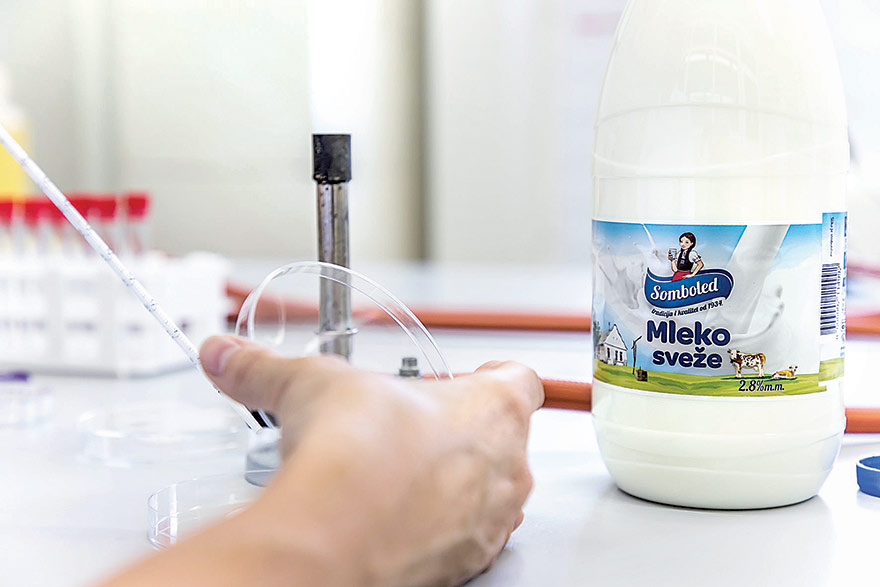 In 2007 Somboled joined Lactalis Group, a leading dairy group globally, and gained the opportunity to modernise its factory, as well as to access the international market.

Thus, experience and tradition dating back to 1934, when Somboled was founded, have been enriched with international expertise and stateof- the-art production technology. Being part of Lactalis Group, today Somboled belongs to the very top of the Serbian dairy industry and is considered one of the vital representatives of Serbian- French economy cooperation.

As one of the Balkans’ oldest dairies, Somboled processes over 80 million litres of milk annually, while remaining consistent in preserving the freshness of products and their natural ingredients. Within the Dukat, President, Galbani and Somboled brands, each year the company places a wide variety of dairy products on Serbian market, consisting of milk, yoghurt, fruit yoghurts, sour cream and butter, as well as various types of cheese and other products. The company is committed to preserving the local gastronomic heritage, which results in the production of dairy products that are favourites among consumers.

Today the company cooperates with almost 700 farmers on the procurement of raw milk, preserving the tradition of producing the highest quality milk and dairy products. Thanks to the Lactalis Group, domestic milk producers have been granted access to additional expertise and financial support for optimizing production and preserving the quality of raw milk, in accordance with the European Union’s high standards of quality. Thus, for many years Somboled has been successfully exporting its products to the countries of the region, such as Croatia, Bosnia-Herzegovina, North Macedonia, Montenegro, Slovenia, Hungary, Romania and Bulgaria, but also further afield, to Germany and the Czech Republic, as well as to Russia.

The past year, marked by the pandemic, didn’t stop Somboled’s development, with the company using the crisis period for further growth. Alongside the regular maintaining of the supply chain under aggravated conditions, Somboled managed to launch a new production line for one of the most beloved cheeses on the Serbian market – President Somborska, thus expanding its capacities. Somboled’s priorities included intensive cooperation with farmers and preserving the purchase price of milk, with which the company contributed to ensuring the sustainability of its subcontractors’ operations. By reorganising its own operations, applying all sanitary measures and respecting the recommendations of the government, Somboled ensured its employees had a safe and secure place to work. These steps contributed to the smooth running of all aspects of production, distribution and sales.

Even during the year of the pandemic, Somboled remained consistent regarding its objectives: to maintain the highest level of quality of raw materials in terms of safety and nutritional value, which make Somboled products healthy, tasty and top quality. Staying true to the highest standards of production, the company continued investing in the modernisation of technology and all-encompassing control measures at all stages of production, continuing to place dairy products tailored to the modern consumer on the domestic and international markets.

The narrative of good bilateral relations between France and Serbia was based on strong historical ties for a long time, with little progress achieved...
Read more

The Western Balkans are becoming an ever more important region on the French agenda. Visits of top French officials, as well as agreements signed...
Read more

Our mandate supports Serbia's rapprochement with the EU through the financing of sustainable and innovative projects that have a strong environmental and social dimension. The...
Read more

Sanja Ivanić, CEO Of The French-Serbian Chamber Of Commerce, CCIFS

We are satisfied with the large growth of the trade exchange between France and Serbia since 2010, and I hope we’ve also contributed to...
Read more

The Renault Mégane Conquest brings an entirely new body shape to Renault's offer – that of a sports SUV. The exterior look is a...
Read more

We may or may not like the Belgrade Waterfront development, but one thing that’s for sure is that it has impacted on the real...
Read more

Proud Of Every Project

Arhi.pro was established in 2002 in Belgrade. Emerging out of a small, local architecture studio, it has since grown to become a leading enterprise...
Read more

Education Is At A Major Turning Point! UDG Offers A Unique Educational Model

The University of Donja Gorica (UDG) is dedicated to its students and training them for both their professional advancement and to be a responsible...
Read more

New Laboratory For A New Age

Veterinarski zavod Subotica was established in 1921 as the state sought the capacity to produce vaccines. Today we have seen that support for companies...
Read more

Planting Seedlings Of Care For The Environment

With the ongoing challenges to preserve our planet that’s endangered by climate change, global multienergy company TotalEnergies continues to pursue its ambition of reaching...
Read more

Every Risk Is A New Opportunity

WTW operates in 140 countries and is a global leader in people, risk and capital management consulting. In Serbia, it focuses on risk management...
Read more