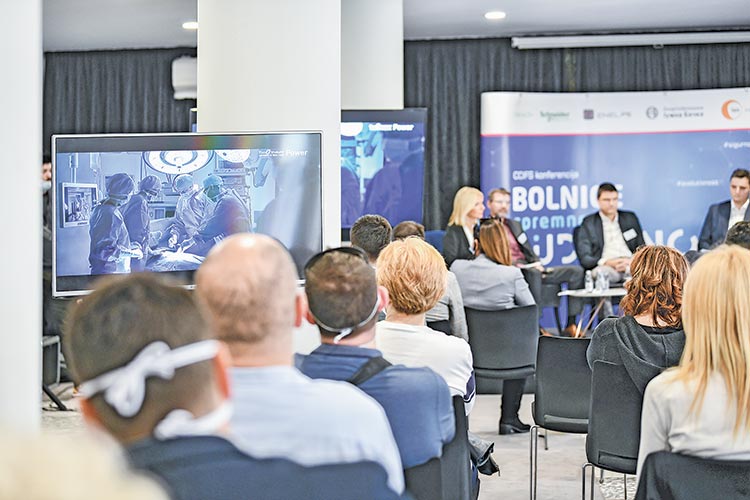 The basic role of the CCIFS is to enable its members to access its network of companies, exchange experiences and knowhow, and realise cooperation with other members, both in Serbia and around the world. In order to promote French-Serbian economic exchanges and enable communication between member companies, the CCIFS organises around fifty different events annually.

The CCIFS organises three to four events of different formats per month, which represent an opportunity for members to get acquainted, inform one another and, of course, enjoy socialising together. Confronted by the new situation caused by the coronavirus pandemic, the Chamber changed the format of events and launched a series of webinars organised for members. The topics were varied and aimed at being as useful as possible to members.

In cooperation with colleagues from six French chambers in the region, the Chamber also organised regional webinars: ‘Central Europe – what are the prospects for supply chains?’; ‘Processing industry – a chance for Central and Eastern Europe’; and ‘The future of energy efficiency in Europe’, which gathered together more than 700 participants. The CCIFS also organised various informal workshops, such as ‘Let’s Bake Together’, in cooperation with LESAFFRE, at which members were taught culinary skills.

Hybrid events were also organised, the best attended of which were ‘Hospitals Ready for the Future’ and ‘Water Sector: Smart Solutions for Sustainable Development’.

Also continuing to be held unhindered during the year of the pandemic were online meetings of clubs (Transport and Logistics, Infrastructure and Construction, CFO, HR, Digital, Agroclub and CSR), during the scope of which members exchanged experiences and mutually advised each other on ways to respond to different market demands during the crisis period.

The CCIFS, in cooperation with the Chamber of Italian-Serbian Businessmen and the German-Serbian Chamber of Commerce, launched a series of online conferences aimed at promoting dialogue between companies and state institutions. Three conferences have been jointly implemented to date: with the Tax Administration, the Ministry of Labour, Employment, Veterans and Social Affairs, and the Ministry of Environmental Protection.

On 23rd October 2020, the online conference “Dialogue 3.0 with the Tax Administration” was held. These conferences, held at the operational level, are an excellent format for companies that thus receive very specific answers to their inquiries.

In cooperation with the Career Development Centre of the University of Belgrade, the CCIFS launched a series of online workshops intended for students and giving them an opportunity to receive first-hand information from employees in various sectors at CCIFS member companies.

The workshops organised during the first series dealt with professions in the fields of technology, finance, marketing, telecommunications, sales and project management. CCIFS organisers were very pleased with the positive feedback from students, who participated in large numbers, and will this autumn organise a new series of workshops, dedicated to the occupations of the future.

Launching The Campaign “How Can We Help You?”

In the context of the outbreak of the coronavirus pandemic and the crisis that has gripped companies in Serbia, and with the aim of enabling the carrying out of its basic activity, in terms of supporting members, the French-Serbian Chamber of Commerce has launched a campaign called ‘How can we help you?’. Throughout the duration of the state of emergency, and afterwards, the entire CCIFS team was available to members at all times, in order to provide them with the best possible assistance and support during the crisis period.

The French-Serbian Chamber of Commerce was the initiator in the sending of an open request to Economy Minister Siniša Mali seeking the implementation of additional measures to support small and medium-sized enterprises. This initiative was supported by 12 bilateral foreign chambers of commerce and organisations in Serbia.

Simultaneously, in agreement with member companies from the construction sector, the CCIFS sent a letter to the Ministry of Construction, Transport and Infrastructure containing proposals to ease business caused by the COVID-19 pandemic.

Several surveys were also conducted to assess the impact of COVID-19 on the operational and financial activities of CCIFS members on the Serbian market, the results of which enabled the Chamber to better understand the needs of members.

Under the scope of support for start-ups and enabling French and Serbian companies to more easily integrate into the local market, the CCIFS opened the LeBooster Business Centre at its address in the heart of Belgrade, with an offer of offices, office space in a co-working area, virtual offices and conference rooms in a unique environment with a French touch. Companies can register a firm at the CCIFS’s address, or rent a desk for a certain period, along with the entire logistics, business and networking offer of the Chamber.

As an added benefit, individuals and businesses who use LeBooster Centre become part of the dynamic French-Serbian business community and gain access to a network of contacts and the numerous events organised by the Chamber.

This is one of the Chamber’s most important events, which aims to promote French products, expertise and culture through a series of events organised at several locations in the capital and further afield. The objective of French Week is to promote historical, cultural and business ties between France and Serbia, and it is held during the period connected to the popular French custom of welcoming the arrival of young French wine, Beaujolais nouveau. The broad and colourful contents of the event provide guests with the opportunity to participate in traditional French Week events; to learn some of the secrets of French cuisine, to taste good wine at the reception of Beaujolais nouveau, and to taste famous French cheeses and other delicious delicacies.

This year’s French Week was organised in accordance with all health measures enforced in the Republic of Serbia with the aim of reducing the spread of COVID-19 infection. Events were organised exclusively online, including an Online Job Fair, Skills lab – an event intended for students, webinars of member companies: Electric vehicle chargers – Enel PS and the Digital Transformation of Energy Management – Schneider Electric. French Week also included the organising of an exclusive online meeting with the economic counsellor of the French embassy, Fabrice Blasquez, and the general director of the French-Serbian Chamber of Commerce, Sanja Ivanić, for representatives of French companies interested in exporting and opening companies in Serbia.

The French-Serbian Chamber of Commerce works continuously to provide support to French companies wanting to develop their business activities in Serbia. The Chamber helps companies from France in researching market potential, finding clients and partners, opening branches and their operations on the Serbian market in general.

Within the network of French chambers of commerce abroad, the CCIFS is ranked in the third – highest category, because it provides a complete service to French companies interested in the Serbian market: from initial information about the market to the opening of a business and assisting in running enterprises. The Chamber has for eight years been an operating partner of Business France, the stateowned French export promotion agency, and a member of Team France export. It also provides support to companies in the countries of the region, Bosnia-Herzegovina, Montenegro and North Macedonia.

The CCIFS business centre, LeBooster, provides services from the renting of offices to all kinds of assistance in company operations.

Traditional humanitarian run CorD Charity Masters was held on 15th May as a part of the 35th Belgrade Marathon. This year the 14th edition of...
Read more