In 1715, the town of Sinj, located in the southern inland part of Dalmatia, Croatia was under attack by 10,000 strong Ottoman Army. Wanting to occupy Sinj, the Ottomans had reached the edge of town and were close to taking ownership. The battle for Sinj was brutal, with just 1,500 defenders the local priests of Sinj prayed to the Almighty for the town to be saved.

Local legend has it that the town of Sinj was granted a miracle when the home forces were victorious. The town was saved. Now, whether they achieved this feat on their own merits, by divine intervention or some combination of the two is a subject that remains up for debate, for anyone other than the people of Sinj.

The people of Sinj believe that a woman in white was seen, walking on the walls of Sinj. The legend of Sinj is that this woman was Madonna. Appearing after hearing the town’s prayers, forcing the Ottomans to withdraw. The town of Sinj declared to host an annual festival in the Virgin Mary’s honour to show their gratitude for her assistance; the Sinjska Alka.

Taking place each year on the 1st weekend of August, the historical Sinjska Alka event was inscribed on the UNESCO Intangible Cultural Heritage List in 2010.

Essentially it’s an equestrian competition, where a device called the alka is suspended 3.34 metres on a rope above the main street. The alka is a large iron circle that has a smaller iron circle held at its centre by three strips of metal. Riders strive to hit the alka directly through the centre circle of 33mm with their iron-tipped wooden lance of only 32mm in diameter as they gallop, full speed down the main street.

Taking place each year on the 1st weekend of August, the historical Sinjska Alka event was inscribed on the UNESCO Intangible Cultural Heritage List in 2010 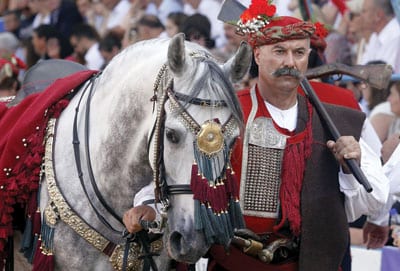 This medieval-style jousting competition starts with a parade through town with all of the individuals mentioned above and a marching band. The tap-tap-tap of the drums can be heard from one end of the town to the other. There is something about a marching band, the coordination of the band walking in rhythmic fashion together with hair-raising sounds of the instruments gets me every time.

The marching band together with a police escort leads the way for the Knights of the Alka. The people of Sinj are silent and proud, watching as the parade makes its way toward the stadium.

Though similar equestrian tournaments took place in many coastal Croatian towns in years gone by, the Sinjiska Alka is the last remaining competition of its type that is still being held in modern times. Participants, known as Alkars or Knights are selected from within the local community. A child of Sinj joins the local ‘Alka Club’ and trains for many years to learn the skills required to one day be an Alkar. It’s a truly great honour to be selected. 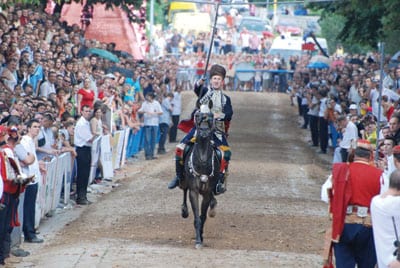 Each year the top 11 to 17 Alkars are named to participate. Dressed in traditional and elaborate 18th-century clothing, tall hats & boots the Alkars are sat on top of most grand looking horses. The Alkar Knights mount the horse at one end of the track, with hundreds of people sitting in the grandstands on either side and with hundreds more congregating at the end of the track.

At the start of the race, the crowd waits in anticipation of the Alkar and his horse to gallop past. The Knight and his horse begin slowly at first and then proceed into a full gallop rather quickly. The pair must race along the 160-metre track to reach the Alka in less than 13 seconds to qualify for the attempt to secure the Alka. 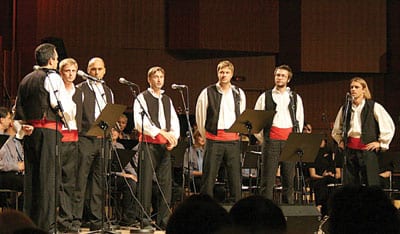 The outfits worn vary based on the rank and position of the Alkar, however, he must keep every item of clothing, including his hat on during the event. If his hat tumbles off during the event, it’s the judges decide if he can attempt to collect the Alka again.

The entire tournament is presided over by a rider decked out in gold who is granted the honorary title of Duke. Other noteworthy participants include the shield and mace bearers as well as the grooms responsible for the Duke’s second horse. This animal’s accoutrements are said to belong to a Turkish duke from the time of the siege.

Each year the top 11 to 17 Alkars are named to participate. Dressed in traditional and elaborate 18th-century clothing, tall hats & boots the Alkars are sat on top of most grand looking horses 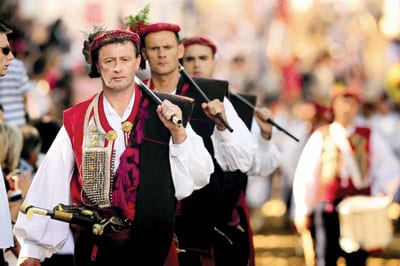 The Alkars are kept under the command of a troop leader as are their squires. In keeping with tradition, the squires are responsible for the care of their knight’s lance and horse.

Rules for this annual event were finalized in the 1830s, and the scoring system is based on what portion of the main ring is hit by the lance. On each attempt, contestants can receive from 0-3 points. Each gentleman gets several attempts before the tallies are counted and the prizes and honour of winning such a special event are awarded. Only male riders are eligible to join the riding club. They do so, at around the age of 9-10 and if they persist, show talent and other qualities they can join the procession around the age of 20. Several years later they are allowed to compete in the Sinjska Alka event, but only if the rider or his father was born in Sinj. Training for the selection of the Knights begins each May and by the beginning of July, the Duke (vojvoda) announces the selected participants.

Croatia is Open to All Forms Of Cooperation

Serbia and Croatia were until recent members of the same community, integral parts of a single country, while today they are the closest of neighbours, who have good cooperation in various fields because there are mutual willingness and scope for cooperation
Read more

Luka Burilović, President of the Croatian Chamber of the Economy

Serbia and Croatia have the potential to work together better than has been the case to date, from joint investments to joint exports. On the global scale, our economies are both small, but through joint forces, we can count on larger markets, simpler business start-ups on third markets and better references
Read more

Marko Čadež, President of the Serbian Chamber of Commerce

It is easier for businesspeople than politicians to find common ground and remove obstacles, and they do so by identifying points of mutual interest and accentuating mutually beneficial things, profit and success. The principles and customs that rule the business world can certainly greatly contribute to political normalisation
Read more

While There Are Neighbours, There Will Be Open Issues

Croatia strives to help Serbia in its European integration process, and the issues highlighted in this process are important both for Serbia and for...
Read more

Businesspeople Speak the Language of Cooperation

Strengthening economic cooperation between Croatia and Serbia contributes to progress in the entire region, and withstands the challenges posed by occasional political disputes. The operations of members of the Croatian Business Club, in which colleagues share their experiences about the challenges of European integration and jointly participate in international programmes and initiatives, is a good example of constructive responses to transient tensions
Read more

Business People of Croatia and Serbia In Favour Of Mutual Cooperation

Although they belong to different worlds, with Croatia in the family of European countries and Serbia in the group of candidate countries, the businesspeople of the two countries have similar concerns, in terms of how to raise their efficiency and survive under conditions of harsh competition – where it is possible through combined forces
Read more

Croatia a Small Country With a Rich Cultural Tradition

Traditional Croatian culture is characterised by exceptional diversity. Ecological conditions and the influences of the cultures with which the Croats have come into contact...
Read more

Cyclists of all ages gathered on the island of Hvar in early June to take part in the 5th Jubilee Cycling Through Heritage Race....
Read more

In 1715, the town of Sinj, located in the southern inland part of Dalmatia, Croatia was under attack by 10,000 strong Ottoman Army. Wanting...
Read more

Stretching along the Adriatic Sea, just a stone’s throw from Central Europe, Croatia is a country defined by a rich cultural legacy. Today, history...
Read more