These world famous horses originally from Spain are schooled in the Winter Riding School of the Hofburg Palace in a hippodrome once reserved for the imperial family. During their morning exercise, they practice the choreographed steps which will be executed perfectly at the evening gala with their riders. These stallions were once stabled in the courtyard of every royal household in central Europe, valued as ceremonial horses for parades, jousts and military campaigns. However, only in Vienna has the tradition of Lipizzaner horsemanship endured to this day. The Lipizzaner horses, Europe’s oldest domesticated breed of horse, take their name from an imperial stud which was located near to Trieste. And the Spanish Riding School is the only institution in the world which has practised classical equitation in the tradition of the Haute école since the Renaissance. 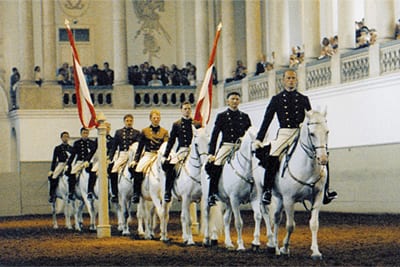 Lipizzaner horses are bred at the Piber Stud Farm in Styria, and the young stallions which demonstrate the best jumping ability and stamina are selected for High School training. They begin with four years of schooling in Vienna, where the guiding principle is the wellbeing of the horse. During gala performances, the horse performs the movements that it would naturally make in the pasture – various gaits, changes of steps and jumps – but in a beautifully stylised form. Through the specific strengthening and training of muscles, the horses’ natural movements are developed into the perfect figures of the High School. A stallion may be perfectly schooled after about six years, but a rider needs a full ten to twelve years of training. During their first four to five years the riding school apprentices practice above all the correct posture in the saddle on a professor horse. In 2008 women were accepted as riders for the first time in the history of the Spanish Riding School. British and Austrian female riders are currently being trained.

In 2015, the tradition of the Classical Horsemanship and the High School of the Spanish Riding School were admitted to the UNESCO’s world heritage list of intangible cultural heritage of humanity

The audience at the gala performance sees the stallions demonstrating the most demanding movements such as pirouette, passage and piaffe and the most difficult jumps to the accompaniment of Austrian classical music. The horses are both ridden and led by the reins.

The highlight of the evening, after the pas de deux (two horses in mirror image), is the school quadrille, a very difficult dance with eight Lipizzaner horses, precisely choreographed to historic dance music from the time of the Viennese Congress. This ballet of the white stallions requires intense concentration. Nothing is done purely for show and yet every detail is impressive – the baroque riding hall from 1729, the historic uniforms, the complete trust between rider and Lipizzaner, who communicate only with body language. It is a perfect, living work of art, in which the unity of horse and rider touches everyone who witnesses it.

In 2015, the tradition of the Classical Horsemanship and the High School of the Spanish Riding School were admitted to the UNESCO’s world heritage list of intangible cultural heritage of humanity. The UNESCO list comprises over 300 cultural practices and expressions of intangible heritage and includes two other Austrian traditions, falconry and the Schemenlaufen carnival of Imst.