Franz Schausberger Ph.D., Founder and Director Of The Institute Of The Regions Of Europe (IRE)

The European Union is a Loyal Partner

The Institute of the Regions of Europe (IRE) recently organised a conference entitled “Europe and Corona: Dangers and chances”. We asked Franz Schausberger Ph.D., Founder and Director of the IRE, which conclusions from that event he would consider as the most important when it comes to our part of the world. We specifically addressed the issue of candidate countries that might be afraid both of the coronavirus and the economic and political disintegration of the EU, caused partly by the pandemic.

It is of high importance, not just for the Western Balkan Region but for all of Europe, to increase cooperation and solidarity between states and regions. The European Union showed quick and massive solidarity by helping the Western Balkan region with an aid package of 3.3 billion euros. There was no dispute on that within the European Institutions and member states – says the IRE founder and director.

“Furthermore,” adds our interlocutor, “not just the region but many European countries have to improve their healthcare system. In general, a conclusion we drew at the Summit is that research and healthcare systems should be much more at the centre of political attention.”

“No one needs to be worried that the EU will disintegrate because of pandemics. It is the other way round: after the initial shock, many regions and states showed solidarity and received intensive care patients from other countries, while the European Commission has been distributing medical and protective equipment to European states. Even the point where the states showed some kind of disagreement – on recovery funds – was not a general disagreement, rather a discussion on the technical details of financial aid,” says our interlocutor, before adding that there is certainly always the danger that some political groups will try to demolish Europe when an economic situation renders it vulnerable.

On the positive side, what are the opportunities presented by this situation and which forces are able to bring them to life?

– We all learned that, first of all, we have to be much better prepared for global crises like pandemics. European coordination networks have to be improved. There are chances, for example in the field of digitisation. Many companies, schools, universities or public service institutions were forced to bring their digital infrastructure into the 21st century.

Though physical distancing is a challenge that society has to cope with, today’s technological possibilities helped bring people together even though they weren’t able to get together personally. So, family members could at least see each other virtually and business could also be done online. And, as mentioned above, perhaps the field of research and medicine is now getting more attention.

Serbia and Kosovo should rely on the talks in Brussels. The talks with the United States have to be viewed under the aspect of the election campaign; they will be without any substantial outcome

How has the IRE responded to the challenges, both through its scientific networking and within its own network?

– In the first period of the pandemic, in spring, we switched to home offices and worked on a remote basis. We had online meetings every day and prepared the Salzburg Europe Summit. Very quickly, at the end of April, we decided and communicated that we would hold the Summit as a presence event.

This was a clear positive signal in Salzburg. After going back to normal office work, we certainly worked to a basic prevention and sanitation concept, with distance, disinfection and attention. But we always wanted to show our members and our network that we work normally for the sake of our members. So we conducted meetings, discussions and events on various topics online, published our members Magazine, worked on our scientific journal “Occasional Paper” and organised the Salzburg Europe Summit. 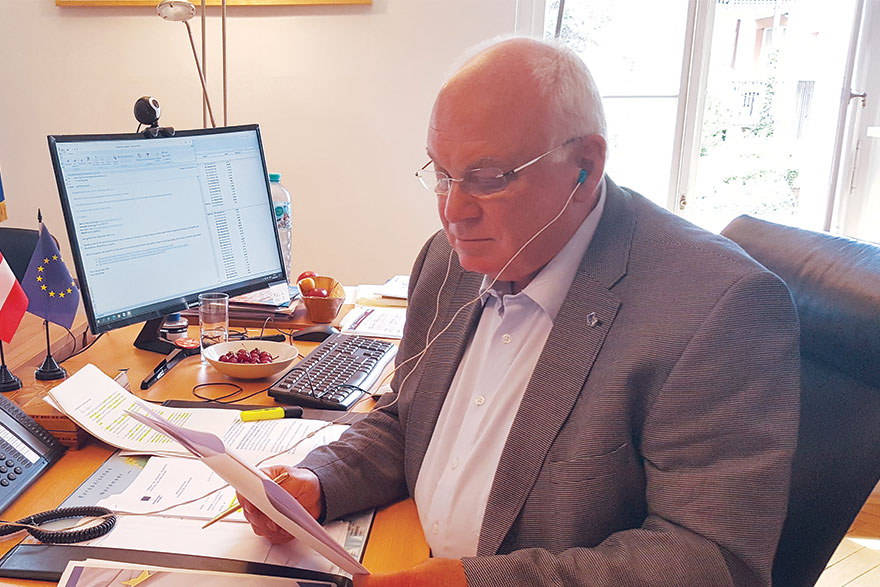 Furthermore, we organised a video meeting between member Region Ajara (Georgia) and an expert from our Health Ministry, took part in an online debate about tourism in Romania and – together with a regional newspaper – conducted an online debate with Martin Selmayr, the representative of the European Commission in Vienna. During the lockdown, we initiated a project called “Voices from the European Regions”, which saw dozens of people from our member regions send video messages about the Corona-situation in their region and how they feel about it.

We are very proud that our efforts paid off and we gained many new members (regions and companies) during the time of the pandemic. This shows that there is a desire for cross-regional cooperation, especially in challenging times!

You are a special advisor to Johannes Hahn, the former EU Commissioner for European Neighbourhood Policy and Enlargement Negotiations and, as such, your focus is on better information on the European Union being available in regions and municipalities within EU member States, but also in the countries encompassed by the European enlargement and neighbourhood policy. Which challenges have arisen in communication there?

– I see two main challenges: First of all, the issues that the European Union (Institutions) are working on are very complex and not always easy to understand. There are many issues to deal with in a globalised world. On the other hand, there is lack of information in the regions and municipalities regarding the ways European decisions and programmes impact on the regions and municipalities.

Mayors and regional authorities often have little information about the EU and its institutions. To have and disseminate this information would be very important in times of pre-accession. Here we have to work much more to break down the information. That’s why Commissioner Hahn and I want to expand the Austrian initiative called “EU-Counsellors” to the villages, cities and municipalities of other European countries.

To what extent has the situation created by the pandemic become fertile ground for misinformation when it comes to communication regarding the EU’s enlargement policy?

– I don’t see special misinformation regarding EU enlargement or the Western Balkans during the pandemic. It is more a general misinformation campaign aimed at playing down the risks of this pandemic or undermining trust in institutions. We all have to work hard to tackle the growing numbers of conspiracy theories regarding this Coronavirus.

Mayors and regional authorities often have little information about the EU and its institutions. That’s why Commissioner Hahn and I want to expand the Austrian initiative called “EU-Counsellors” to the villages, cities and municipalities of other European countries

What role did the IRE networks play in communicating the EU’s efforts to support Serbia in terms of medical support and overall assistance?

– We followed the EU’s assistance to the Western Balkans, and therefore also Serbia, very closely during the pandemic. We informed our network about how the EU, through different member states or regional initiatives, supports the region. The EU, as the main partner of this region, has supported Serbia with 93 million euros for economic recovery and emergency assistance since March. Furthermore, the European Union has also paid for the hiring of 200 additional medical workes and has financed the purchase of 800,000 protective masks, 100 triage containers, 100 oxygen concentrators, 75 devices for anaesthesia and ventilation, 300 infrared contactless thermometers, 100 oxygen concentrators, uniforms, emergency items and support for the most vulnerable sectors of the population, such as elderly people, single mothers and the Roma community. As Co-Chairman of the Joint Consultative Commission “Serbia” (JCC Serbia) of the European Committee of the Regions, I am constantly in contact with my Serbian Co- Chair, Niška Banja Mayor Dejan Jovanović, in order to receive and exchange information about the situation confronting cities and municipalities in Serbia.

– The European Commission is dedicated to bringing the Western Balkans closer to European Union, though we have to keep in mind the different stages of development they’ve reached when it comes to negotiations or candidate status. It has to be a win-win-situation, where the authorities in the Western Balkan states conduct the necessary reforms as quickly and efficiently as possible, while the European States retain their support for EU Enlargement. As far as I can judge, Commissioner Olivér Várhelyi is dedicated to this issue. Commissioner Johannes Hahn laid a perfect foundation in his former role as enlargement commissioner. The regular reports of the Commission on the situation in the Western Balkan countries provide a good overview.

In your opinion, what does the future hold when it comes to the Belgrade-Pristina Dialogue?

– The solution is as simple as the situation is difficult: dialogue has to be kept up! There should be no provocation between the political authorities of both countries, rather mutual respect and steady dialogue. The talks with the United States have to be viewed under the aspect of the election campaign; they will be without any substantial outcome. Serbia and Kosovo should rely on the talks in Brussels. They are less spectacular, but more sustainable. The European Union will be a loyal partner.