Austrian Companies Are Committed To The Serbian Market

Belgrade is increasingly becoming a regional centre of the Western Balkans for many Austrian companies that are taking advantage of their Serbian partners’ in-depth knowledge of the region. This is just one of many positive developments in mutual economic relations

Austria has been among the leading home countries of investors in Serbia, but the profile of companies coming to the country has changed as the economy has grown. A strong pool of Austrian companies with a presence in the service sector has now been joined by medium-sized counterparts from the manufacturing sector. Furthermore, both Vienna and Belgrade are eager to establish closer cooperation in advanced technological sectors – says Erika Teoman Brenner, commercial counsellor at the Austrian Embassy in Belgrade.

Some statistics suggest that there are around 800 companies of Austrian origin operating in Serbia. What is the pace at which Austrian companies are coming to Serbia?

– Austria is indeed a very important investor in Serbia, with an investment volume of around 2.5 billion euros. It is difficult for us to confirm the number of 800 companies, which seems a little high on the basis of our estimates. The important thing, however, is that when Austrian companies come to Serbia they stay – even during times when their businesses are not doing too well. They are committed to their investment but Belgrade is increasingly becoming a regional centre of the Western Balkans for many Austrian companies that are taking advantage of their Serbian partners’ in-depth knowledge of the region.

This is just one of many positive developments in mutual economic relations also, more than anything, to their staff, their customers and their local community. This is mainly due to the fact that the majority of Austrian companies are family-owned and, as such, tend to focus on long-term sustainability and growth. We currently see interest in coming to Serbia among some manufacturing companies – some of which have already decided on a location, while others are still in the decision-making process. This process is often influenced by external factors, like suppliers’ demands and production processes.

Austrian companies are very much present in Serbia’s service sector, whether that be through banks, insurance companies or other service providers. What is the level of investments in production?

– We are very glad to see so many Austrian companies as market leaders in the service industry. They were often actually the first in their field to come to Serbia, and have hence enjoyed the advantage of their status as “first movers”. Nevertheless, we also have manufacturing companies – most of them medium-sized and probably not as well-known as some of the “big names”. The largest investment in production so far was implemented recently by Zumtobel in Niš.

Potential and new investors no longer see Serbia as a “low-tech” location. In most cases, the availability of qualified technicians and engineers is the No.1. criteria for choosing a location in Serbia

What is the structure of the trade exchange between Austria and Serbia like in 2019?

– Exports from Serbia have increased continuously over recent years, thus narrowing the trade gap between our two countries. This is a good sign for the competitiveness of Serbian producers, as well as for the growing internationalisation of production chains in Serbia. Despite this, frozen raspberries still represent the single most important export from Serbia.

As regards imports from Austria, we see strong demand for products like paper, pharmaceuticals, machinery and industrial equipment. We also see that Serbia, in particular, Belgrade, has increasingly become a regional centre of the Western Balkans for many Austrian companies, who take advantage of their Serbian partners’ in-depth knowledge of the region.

Those investments in manufacturing that are already operational in Serbia originally came as “low-tech” manufacturing. Are they upgrading their operations?

– There is definitely a trend among many companies to “upgrade” their Serbian operations. We also know from our talks with potential and new investors that they no longer see Serbia as a “low-tech”- location. In most cases, the availability of qualified technicians and engineers is the No.1. criteria for choosing a location in Serbia. 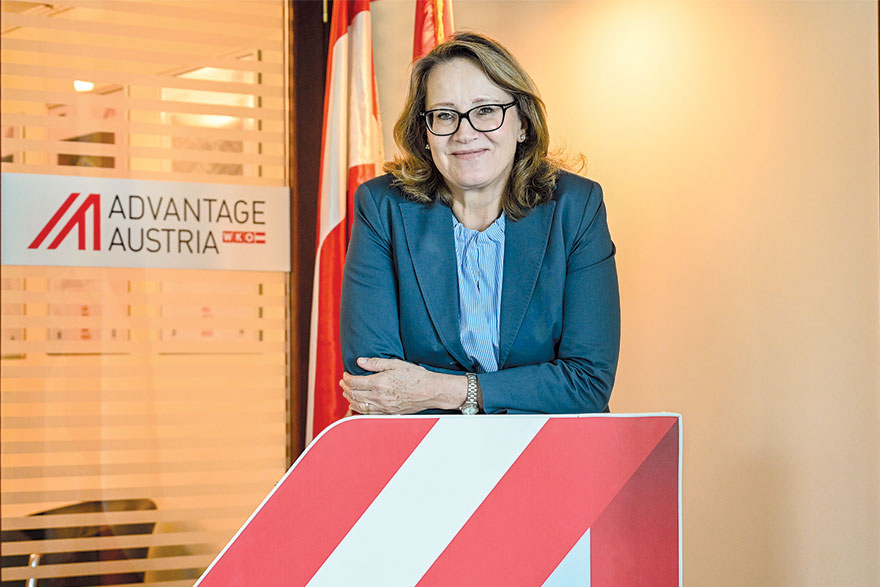 You have also a significant investment in an IT-company in Serbia that develops extremely advanced systems for the European automotive industry. Is it a unique example, or are Austrian companies thinking of setting up serious IT investments in Serbia?

– The IT sector is definitely a very promising area for more intensive cooperation. Serbia is very fortunate to have excellent universities and colleges in this field, and their graduates can compete with the best at the global level. Although other Austrian companies are increasingly looking into new opportunities here in Serbia, the company you mentioned is certainly unique in terms of its size, scope and level.

Austria supported the introduction of a dual education system in Serbia, primarily because of investors from Austria. Was this policy measure enough to secure the supply of a high-quality workforce in Serbia?

– We are still running several activities to support the successful implementation of the dual education system in Serbia. The need of Austrian investors for qualified workers was the starting point for our project, in the sense that we identify trades in which dual education profiles are needed on the basis of their input. However, our support goes far beyond that. Just to give you an example, we bring expert trainers from Austria who spend a few days with Serbian trainers, showing them how to train students to handle real-life situations in their professions.

Furthermore, we helped with our expertise in the drafting of laws and by-laws in such a way that dual education can be implemented smoothly. We support a national campaign that aims to raise awareness of dual education among students and their parents.

By doing all this, we hope that we can contribute – in the medium and long run – to improving youth employment in Serbia and simultaneously making Serbian businesses – both domestically- and foreign-owned – more competitive.

Links between Belgrade and Vienna were strengthened recently by new exchanges of expertise. What, in your opinion, does the future hold for this cooperation?

– Belgrade and Vienna have always enjoyed excellent relations – not least due to the high number of residents of Vienna who are of Serbian origin. We trust that recent initiatives to further strengthen these relations will be very fruitful since there is great interest on both sides to focus more on creative industries, innovation, science and technology and start-ups. These are all sectors that benefit from a large pool of incredibly talented young people in both cities. Hence, I trust that in the future we will see more of them inspiring each other in common projects.