One of the most significant buildings on the Ringstraße of Vienna is the Burgtheather, Austria’s national theatre. It faces the line of the Houses of Parliament, the Rathaus (town hall) and the university main buildings and is surrounded by some of Vienna’s most famous coffee houses. The theatre, colloquially known as the “Burg” (“castle”), is one of the most important theatres of Europe and – after the Comedie-Francaise – considered to be the second-oldest.

On 14th March 1741, the theatre manager Joseph Selliers was authorised by Empress Maria Theresia to let a vacant banqueting hall next to the Hofburg palace to theatrical companies. In 1776 the Teutsches Nationaltheater, as it was then called, was placed under court administration by royal decree by

Maria Theresia’s son Joseph II. This marked the beginning of the heyday of German-language theatre in Vienna. In 1794, the theatre was renamed K.K. Hoftheater nächst der Burg. After 130 years of operation, the company’s new theatre building, designed by Gottfried Semper und Karl Hasenauer, opened its doors on the Ringstraße boulevard on 14th October 1888, after fourteen years of construction.

The Burgtheater was the last link in the chain of sumptuous structures built around the Ringstraße, and its magnificent façade has made it one of Vienna’s popular tourist attractions.

In September 1922, the Akademietheater on Lisztstraße was affiliated as an additional stage. During the last days of the Second World War, the Burgtheater was extensively damaged by a bombing raid and a fire of unknown origin, and the company took up temporary residence at the Etablissement Ronacher, a variety theatre. In 1955 the company returned to its home on the Ringstraße which had been restored to its former glory and equipped with up-to-date technology.

Today, the venues Kasino am Schwarzenbergplatz and Vestibül have also affiliated stages to the Burgtheater and its Company.

The famous ensemble is the most important constant element of the theatre and represents the soul of the institution. The Vienna audience loves its theatre stars and shows its appreciation by regular attendance. Even if the Burgtheater today has a modern programme and contemporary structures, it has kept alive many of the traditions that one associates with names such as Paula Wessely, Attila Hörbiger, Oskar Werner or Raoul Aslan, and that have invested the institution with such a mythical aura.

In the ensemble there is always a doyenne and a doyen, the leading actress and actor of the theatre – at present this distinction is borne by Elisabeth Orth and Michael Heltau. Important members of the ensemble are made honorary members, many of whom are awarded the title of Kammerschauspieler. When an honorary member dies, the coffin is laid out before the grand staircase for the memorial ceremony and subsequently carried around the building once in a solemn procession.

The Burgtheater was the last link in the chain of sumptuous structures built around the Ringstraße, and its magnificent façade has made it one of Vienna’s popular tourist attractions

530 people work at the Burgtheater. They collaborate to produce about 20 premieres every year, every single production being a new creative adventure. Everyone working at the Burgtheater approaches his or her work as an artist – this guarantees the sterling quality of our productions.

The Burgtheater (constructed between 1874 and 1888) was the last of the magnificent buildings erected along the Ringstraße Boulevard. Designed by the two architects Gottfried Semper and Karl von Hasenauer, the structure with its ornate facade is one of Vienna’s popular sights. It features busts of playwrights and famous figures from world literature, complemented by paired figures that symbolise human emotions and qualities as they appear in many plays: love and hatred, humility and self-importance, heroism and selfishness. At the top, dominating all the others, the God Apollo holds court with the Muse of Tragedy Melpomene on his right and the Muse of Comedy Thalia at his left.

As the largest theatre in the German-speaking world, one of the most important stages in Europe, and the country’s symbol of freedom, the Burgtheater is a place of turbulence, hope, and art.

The opulent building on the Ringstraße is a symbol of freedom, and not just in the artistic sense. After it was destroyed during World War II, a lot of money and effort went into its reconstruction. It was intended as a step towards a new beginning for a country that had completely lost its identity. Five months after the Austrian State Treaty was signed, the Burgtheater was opened and with it, the birth of the Second Republic was complete.

By the end of the 19th century, the actors of the Burgtheater had developed into a true celebrity cult. “The Burg” was seen as a refuge of genuine Austrianism and as such, transformed Vienna into a theatre city. The first performance of the tragedy King Ottokar’s Fortune and End by Grillparzer after the end of the occupation was associated with the 19th-century myth.

Over the years, the building was gradually modernised. Icons such as Oskar Kokoschka were employed as stage designers and Thomas Bernhard’s “scandalous” Heldenplatz play was brought to the stage, despite large protests. In 1955, this would have been unthinkable, while today, the Burgtheater represents classic and contemporary theatre of the highest level.

“The Burg” is also a masterpiece in the architectural sense – the facades flaunt the style of the Italian High Renaissance on the Ringstraße. Gustav Klimt has also been immortalised in its halls with the frescos which extend high over visitors’ heads in the foyer.

KLIMT AT THE BURGTHEATER

The early work of famous painter Gustav Klimt encompasses a number of paintings he created together with his brother Ernst and Franz Matsch in the context of the Künstler-Compagnie (a studio collective) they had set up. Among these early works are the ceiling paintings created in 1887 for the Burgtheater’s grand staircases. Although still informed by the tradition of history painting, they already point towards the symbolistic phase of the fin-de-siècle in Vienna.

In 1886, the artists were commissioned to portray the history of the theatre on the ceilings of the two magnificent grand staircases. For the Künstler-Compagnie as well as for its eldest member Franz Matsch, only 25 years old in 1886, this commission meant the final breakthrough after commissions in Carlsbad, Fiume and Reichenberg.

More than ten years ago, a bundle of full-scale sketches (called cartoons) by Gustav Klimt for the ceiling paintings in the grand staircases were found in the attic of the Burgtheater. These paintings are seminal pieces in Klimt’s early work, heralding the symbolist phase of the fin-de-siècle in Vienna. This priceless treasure of preparatory sketches by the painter also includes his only self-portrait. 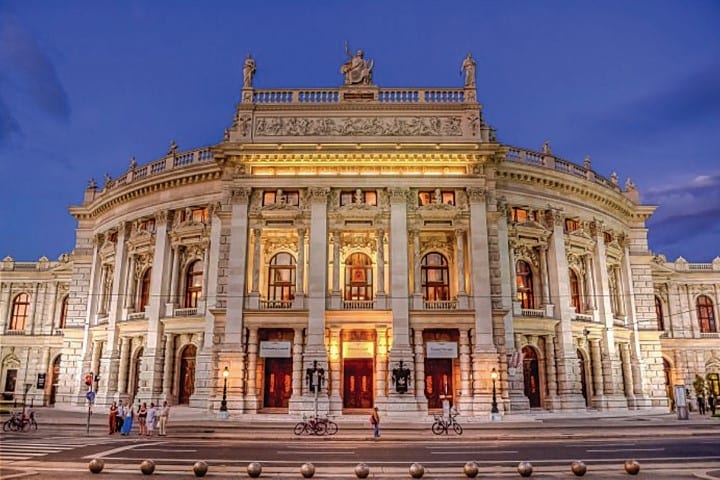 Their restoration completed, they are now accessible to the interested public in a permanent exhibition at a dedicated Klimt-Raum in the Burgtheater.

The fact that the Burgtheater receives a continuous influx of invitations testifies to the eminent quality and standing of the institution and its actors. We welcome these invitations as a token of appreciation.