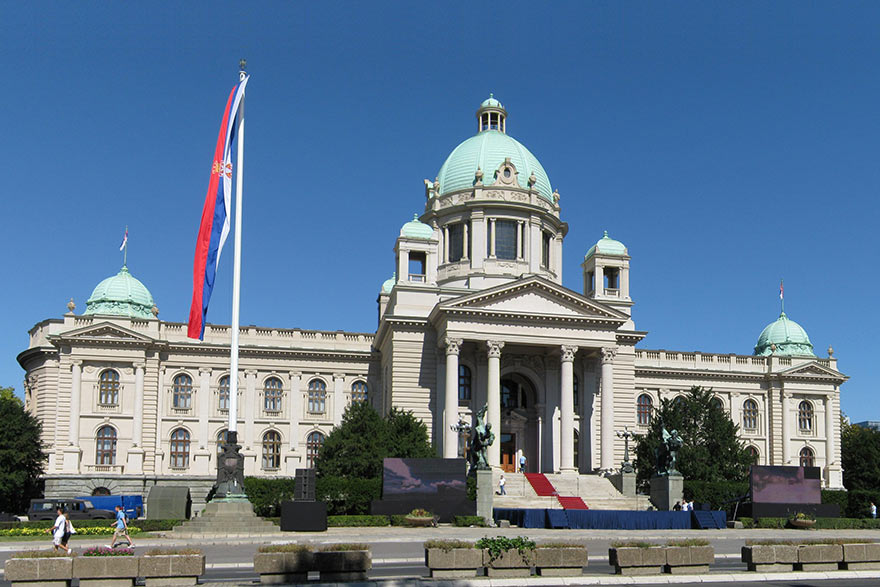 The 21st June elections were a logical epilogue to the terminal stage in a process that began with the 2016 parliamentary elections: it was actually on election night in 2016 that the ‘Savamala’ demolitions happened, only for Progressive torches to be lit on roofs in response to the opposition pounding on pots and pans some four years later, in the age of the Coronavirus.

These are symbolic points. Just like the intrusion of Dveri leader Boško Obradović into the Republic Election Commission in 2016, and the physical attack on the Progressives during the election/boycott campaign in front of the National Assembly. The circle has been closed: Between 2016 and 2020, standing in parallel with the construction of highways, factories, hospitals and shopping centres, is the collapse of democracy and parliamentarianism in this country, which – according to the latest Freedom House report – is, with its hybrid regime, no longer even a semi-consolidated democracy.

Since 2016, Vučić has sharpened his policies in Serbia, increasingly strengthened the authoritarian system of government, only to reach perhaps his historical maximum in the last elections, with a convincing two-thirds majority in parliament. And with that, he can begin getting to grips with changing the Constitution.

With the Progressives as the dominant party (the people’s clientelistic movement), the Socialists in a vassal position and the constructive SPAS of Aleksandar Šapić, along with the odd minority party, Serbia gained a parliament without an opposition, three decades after the introduction of a multi-party system, confirming – also with a ‘Belarusian model’ – that its multi-party system, as a fundamental democratic institution, is in a deep crisis.

Although Vučić would certainly have won even under much more democratic conditions, that victory would certainly not have been so ‘horrifying’. This kind of parliament is not representative, because it does not reflect the mood in Serbian society. These elections have not resolved the fundamental contradictions of the society, nor will they reduce the hatred within it. It will only deaden them in the short term. Serbian democracy, paradoxically, depends solely on Vučić’s rationality. Certainly more than the strength of the opposition, which – with a turnout slightly lower than the average over the last ten years – convinced itself that the boycott succeeded, by also adopting those who did not vote due to their general disgust with politics, including the opposition. Since the beating of opposition figure Borko Stefanović, which was an impulse for awakening the anti-regime consciousness, the opposition has not succeeded in getting serious in terms of both organisation and leadership. Torn between vanity and a meaningless dilemma – citizens or parties!?

After 21st June, there is an unquestionable impression of “a single-party system with multiple parties”, which is a reflection in the mirror of “non-partisan pluralism” that was offered as an alternative model to the multi-party system three decades ago by academic Mihailo Marković, the first ideologue of Milošević’s SPS. It would be a precedent for a country that has a kind of one-party system, simulations in election processes and its players, or which treats its real opposition as anti-systemic, to enter the EU. This composition of the parliament is culturally atypical for democratic systems, and hence there is one important paradox of the government – the more impressive Vučić’s victory is, the more discreetly there is the impression of a Pyrrhic victory, the risks of which few Progressives are aware of except Vučić.

The opposition will wait for Vučić to ‘slip’ on Kosovo, consoling themselves in order to annul his ‘illegal’ decisions, because that certainly won’t get them the support of those who support Vučić from the field precisely to make those difficult decisions.
Even Bolshevik leader Lenin constantly emphasised to his comrades that there was no “ideal revolutionary situation”. It will be tough for that to be the presidential elections of 2022, by which time the opposition must find a “new Koštunica”.

A lower turnout in Belgrade instilled hope in the boycott opposition that the capital could be taken from Vučić in the Belgrade elections that also follow in 2022, although the 2018 elections were really perhaps the last ones in which all important players participated.

At the initiative of the Chamber of Commerce and Industry of Serbia, as of 21 January,  businesspeople from the entire world, foreign and domestic...
Read more

Trag Foundation has announced the launch of the competition for the 14th Annual VIRTUS Award for Philanthropy. This competition...
Read more
Cord MagazineLeaders Meeting Point