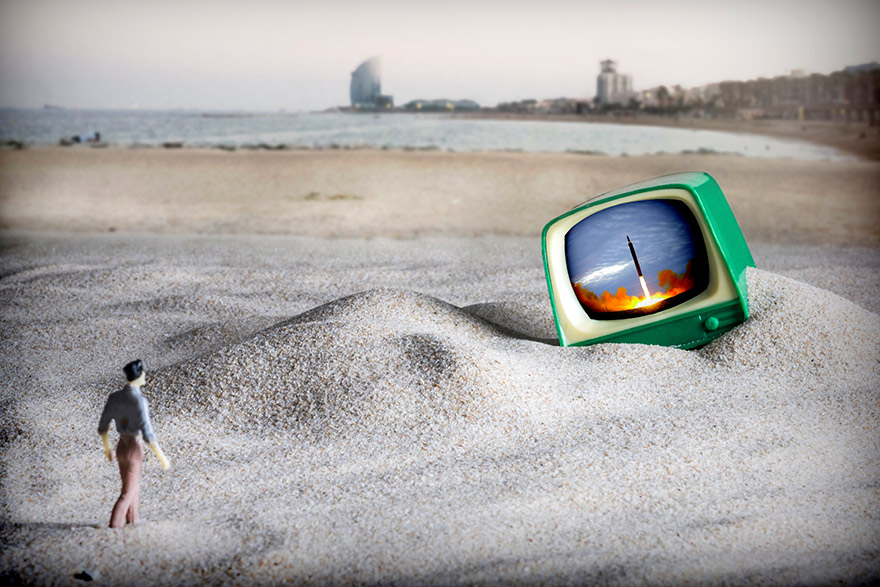 Prior to the storm of the Coronavirus, Vučić determined that Agriculture Minister Branislav Nedimović should be first below him on the SNS election list, only to expressly comprehend that Health Minister Zlatibor Lončar would come to the fore. Although this now comes across as being slightly inhumane, the main political points will be won and lost in the health sector. And in security.

Let’s return briefly to August 1999. Under the impression of NATO bombing, Serbian citizens cleared the streets and disappeared in the face of the natural phenomenon of a solar eclipse — while in the happy West they enjoyed it with the use of special glasses.

The difference is essential: If 1999’s ‘tactical disappearance action’ was also propaganda manipulation by the authorities against a frightened nation, today self-isolation is an act of emancipated civic consciousness. That’s why self-isolation was tougher.

Slavoj Žižek writes, and no longer sounds eccentric, that the world is facing a choice: either Darwinism or Neo-Communism. It will be tougher with the free market. In the face of such challenges, Serbian democracy is a fragile plant, and a precondition of its survival is finding a new social consensus and new, high-quality solidarity. Propaganda cries for various forms of unity – ethnic, denominational, populist, demagogic rule, electoral boycotts – become displaced. Vučić must also build a new form of leadership that it implies, instead of disintegrating-building institutions. Or restoring confidence in them, which was questionable prior to Corona.

Corona is not omnipotent, so it cannot quash political hatred overnight, those smouldering and now-shifting allegations of violations of the constitution in a state of emergency with the mannerist plunder of power according to an opposition that wants to make shameless political use of the state of the epidemic. That is endemic folklore of a tacit election campaign, but Vučić’s responses also at least encouraging the cynical when he tells opposition leaders to freely criticise but to stay home and contribute to the national front against the virus. And they (the leaders) don’t even have another choice.

Vučić must also build a new form of leadership that it implies, instead of disintegrating-building institutions, Or restoring confidence in them, which was questionable prior to Corona

The expertise of doctors and government bureaucrats countered the dominant tabloid consciousness. Official empathy is required. In the state of what Susan Sontag called ‘illness as a metaphor’. They used to joke around with Serbian President Tomislav Nikolić, who announced that ‘yellow people’ would come to the Morava, while now this is precognition that his predecessor Boris Tadić didn’t have, who is announced in the media and as a ‘clinical psychologist’, which he really is by training, and in his attempts to have a sedative impact on opposition citizens at the time of contagion by not killing the gene of civil disrespect for the kidnapping of the crisis by authoritarian rulers.

In the addresses of Aleksandar Vučić, there are no cynical remarks about opposition media, primarily TV N1. That relationship was gapingly lacking before Corona.

EU commissioner Kristalina Georgieva reminded us during the flooding of 2014 about the regional, narrative, intolerance of that lost solidarity, for example in the cases of devastating earthquakes in Skopje, Banja Luka, Montenegro… The pandemic also normalises the experience of Yugoslav socialism, because if Zagreb was hit by an earthquake in Socialist Yugoslavia it would perhaps have had more solidarity than it is now guaranteed by Brussels.

And we’ve already seen all this on film: We recommend 28 Days Later, by Danny Boyle, where zombies are a political and anthropological metaphor. And the streets are as empty as they are now.

Taking On New Challenges With A New Government