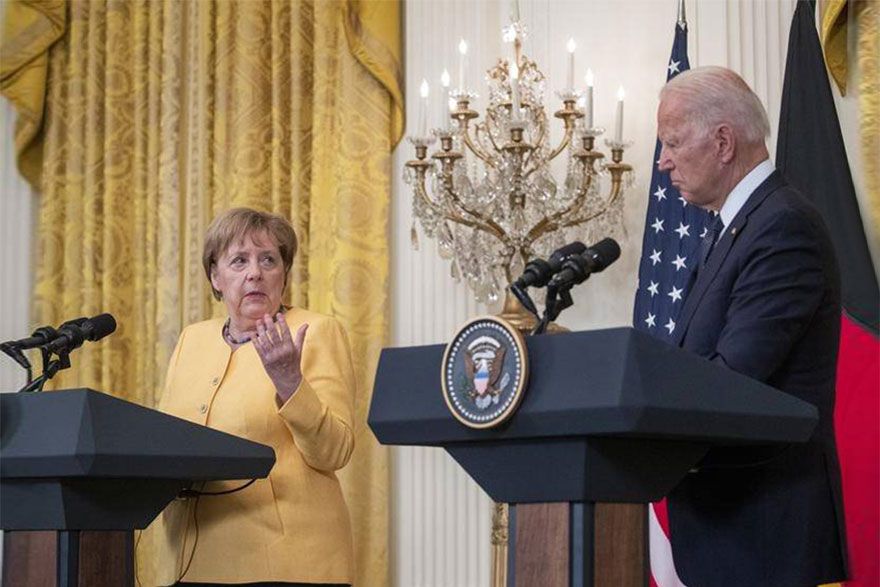 With German Chancellor Angela Merkel on her way out, and America still vulnerable to Trumpism, Germans can neither rely on their traditional protector nor pursue outright strategic autonomy. In a world beset with risk and uncertainty, the long, complicated history of the bilateral relationship may be about to enter a new phase.

German Chancellor Angela Merkel’s farewell visit to the White House this month offers an ideal opportunity to reflect on the state of US-German relations. But it is not a sentimental opportunity. The long, complicated history of the bilateral relationship may be about to enter a new phase.

States shepherded the country’s reconstruction and economic resurgence. This epoch could be summed up under the heading “Guardian and Ward,” which was far more fortuitous than the preceding chapter, “Enmity and War.”

In that chapter, Germany’s ruthless pursuit of world power in two savage world wars eventually ended in its complete and utter defeat. The Allies victory in WWII left Germany divided into four occupation zones. Large swaths of its eastern territory were lost, resulting in 12 million refugees and expellees. And, everywhere, there was the moral abyss of the Nazis’ monstrous legacy.

Since post-war reconstruction relied on US protection and aid, it occurred exclusively in Western Europe, and thus also only in West Germany. Joseph Stalin viewed the Soviet Union as the socialist Greater Russian counterpoint to the US-led capitalist West. From the late 1940s onward, this ideological and geostrategic posturing sustained the Cold War, which played out largely in Germany, and particularly in Berlin, the central point of the new great-power divide.

Germany’s twice-defeated bid for European hegemony and global domination gave way to a close alliance between the US and the Federal Republic of Germany. A degree of political distrust on the part of the US persisted, but German “transatlanticists” refused to see it. From their perspective, the alliance (which included a military component with the establishment of NATO) had supplanted all previous antipathy, and that was that.

They were wrong. Throughout the Cold War, the US pursued a multi-pronged strategy, both deterring the Soviet Union and maintaining control over Germany, in recognition of its vital position at the heart of Europe. The transatlantic relationship was never as simple as its champions wanted it to be, and it still isn’t today.

In normative terms, the Federal Republic was successfully integrated into the West more or less immediately, under its first post-war chancellor, Konrad Adenauer. But in terms of raw interests and political economy, significant differences remained. Since the mid-1950s, for example, the transatlantic perspective competed with a more distinctively European one. And with German Chancellor Willy Brandt’s Ostpolitik (Eastern Policy) in the 1970s – which coincided with the nascent détente between the US and the Soviet Union – the protector and the ward’s diverging interests became even more obvious.

Nonetheless, when the Soviet Union collapsed, the US was the only transatlantic power to issue immediate and wholehearted support for German reunification. For Germany’s European neighbors, its potential return as a geopolitical force brought back old fears of the “German question.”

When Germany became a fully sovereign state through reunification, the old protector-ward relationship necessarily changed. And yet, Germany has not shaken the post-war mindset. Consider other similarly sized European powers. The United Kingdom and France are nuclear powers with permanent seats on the UN Security Council, where they do not hesitate to lay claim to a global leadership role. By contrast, Germany – the world’s fourth-largest national economy – makes no such claims.

Germany therefore will remain dependent on the US security guarantee for a long time to come. Not only is it haunted by its own history; it also must manage enormously complex security conditions. Lying in the heart of Europe, Germany must account for the interests of smaller Central and Eastern European countries – both within and outside of the European Union – while also getting along with an increasingly expansionist, nucleararmed Russia. And it must do all of that at a time when its economic foundations are fracturing.

Moreover, Germany must account for the strategic interests of its protector, even though they are not always congruent with its own. The US is engaged in an escalating confrontation with China, the twenty-first century’s new global power; but China is one of Germany’s most important trade partners. Even more important is the EU, whose future Germany has a key role in shaping. German diplomacy is an immensely complicated enterprise, to say the least.

Celebratory gunfire resounded across Kabul on Tuesday as Taliban fighters took control of the airport before dawn, after the withdrawal of the last U.S....
Read more

Afghanistan: US To Complete Evacuations Despite Attack, Says Biden

President Joe Biden says the US airlift from Kabul will continue despite a jihadist attack that killed over 90 people including 13 US service...
Read more

For the first time in 15 years, one opinion poll this week has given the centre left a lead over the outgoing chancellor's conservatives....
Read more

Five fully equipped ambulances are on their way to Serbian healthcare institutions to help them respond effectively to the COVID-19 pandemic, as well as...
Read more

The Taliban captured two major Afghan cities, the country’s second- and third-largest after Kabul, and a strategic provincial capital on Thursday, further squeezing the...
Read more