Green Wall Plus is a branch of...
Read more

Thanks to a dedicated team of experienced...
Read more

On May 22, 2020, the United States Government announced an additional $20.3 million in assistance to...
Read more

The investment in the automotive sector of Serbia in the last year amounts to 790 million...
Read more

Nestlé joined over 150 major multinationals in urging governments around the world to align their COVID-19...
Read more

Success Mustn’t Lull us to Sleep

With two million pairs of footwear manufactured annually, and that work carried out – directly or indirectly – by almost 2,000 employees, Progetti is currently Serbia’s largest exporter of uppers and ready-made footwear in Serbia

Progetti d.o.o. (Ltd.) is perhaps better known on the Champs-Élysées than in Serbia, despite these most exclusive and beautiful shoes on the planet arriving in Paris and Rome straight from Vladimirci, Vršac or Sombor.

This company established operations in Serbia in 2001 and one of the key questions posed by journalists over the last two decades is how that happened; how Serbia was selected for production operations, and how that production not only survived but has also expanded and improved. Another new plant was recently established in Knjaževac, with an additional 120 employees.

In this interview for CorD, Director and Founder of the company (together with his brother Enrico), Romano Rossi, says that it is a little known fact that Progetti has been present in this area since 1990, i.e. since the time of the former Yugoslavia.

“A long tradition of shoe production, highly skilled workers and geographical proximity to Italy were the basic elements for making this strategic choice. Another important element was the competitive level of labour costs and the extreme (and surprising) open-mindedness of workers to learn new manufacturing processes,” explains Rossi.

Shoes from your production facilities in Serbia can be found on the shelves of the most exclusive retail outlets in Paris or Rome. Are you satisfied with the level of quality of Serbian workers who must adhere to stringent production criteria?

– We are not only satisfied but proud of the achievements of the entire organisation, where everybody – from top management to the cleaning staff develop such an impressive synergy that has enabled unimaginable results. We invest heavily in people and apply an internal salary system based on individual and line performance. We award the best performer, maintaining a highly motivational climate. People can also count on extra annual benefits, as long as balance sheet results allow them.

You have production facilities in Vladimirci, Sombor, and Vršac. Which criteria form the basis of your decision about where something is to be produced?

– We recently also opened a facility in Knjaževac (employing an additional 120 people). At one point we divided production in accordance with the territory: Vojvodina was better for making elegant shoes, South Serbia for sports shoes and so on…

We are proud of the achievements of the entire organisation, where everybody – from top management to the cleaning staff – develop such an impressive synergy that has enabled unimaginable results

Through consistent investment in education and “on field” formation, our factories can perform all kinds of production processes equally, regardless of their location. This is another important achievement that ensures the necessary production elasticity and the achievement of seasonal targets.

Where do you procure the materials required for the production of your footwear? Do you provide workers with education and training?

– So far about 90% of materials have been coming from Italy: we have now launched cooperation with domestic suppliers, and our hope is that we can increase our purchases of raw materials domestically in the near future. 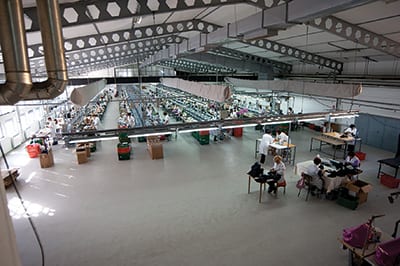 Concerning education and training, they are considered a fixed asset of our balance sheet: I purposely said ‘asset’ and not ‘cost’, as we treat them as a basic investment in the regular activities of the company.

During 2019 we have budgeted for the opening of an internal school in Sombor, to give an opportunity to whoever might be interested in working with us to become part of the team.

Considering that, in addition to your three manufacturing plants, you also collaborate closely with 22 independent companies, is the disbursed nature of your production process an advantage or an aggravating circumstance?

– Outsourcing some of the production when you have to manage large quantities means being able to count on additional capacities and make your customers happy. To be able to count on reliable production partners, who accept your business philosophy completely and with whom you can make strong agreements, is a huge plus. We’re also investing financially in these independent structures, making them grow together with us and become part of our big family. That can be easily considered a win-win situation.

Your goal seven years ago was to produce 1.5 million pairs of shoes. What goals do you now set for yourself and your workers?

– Goals are important in business, but if the business is reduced to raw goals then you miss out on other things because people set goals and achieved by employees. Perhaps that’s why we are so successful, because – alongside ambitious tasks – we also take care of their sustainability.

I will mention two basic principles of business: the first is that – if there is no growth, there is death! And I have to underline that under ‘growth’ we mean sustainable development. And the second is that a man who is building something can never be satisfied. Our goal follows our two principles: we wish to continue to grow to try to be satisfied, which will never happen!

On May 22, 2020, the United States Government announced an additional $20.3 million in assistance to the Government of Serbia, as part of amendments...
Read more