More than three decades of dedication to the business stand behind everything that’s represented by company Delta Inženjering today. The team has fought continuously and with devotion for its leadership position in the area of industrial engineering, and thus today the company has free rein in the project design, engineering and consulting sectors

With unconcealed pride, Mr Todorović makes mention of the special team in the engineering sector, which comprises experienced engineers who possess the necessary licenses. He believes that the best results are achieved through a combination of experience, respect for the profession and teamwork among people of expertise.

You established the company during the time of the toughest economic and political conditions. What led you in overcoming obstacles and meeting challenges?

I’ve been in this business for a long time. It was back in 1973 that I started working and I’ve spent my entire working life in the same job. I started work at Projmetal, a company that dealt with design in the areas of metallurgy, mining and energy.

I later spent a brief spell as the technical director of Tehnogas, and my path also shows what Delta Inženjering has been working on all this time. So, project design in the areas of metallurgy, gas technology and energy. I’m of the opinion that a person should do a job that they know, and we stuck to that principle. We have been progressing since 1st February 1990, when this company was founded, despite that being a difficult time. The wars started, there were no investments, and there was lots of uncertainty. Then metallurgy ground to halt, there was no investment in energy, a period of inflation came, shortages, procurement and payment problems etc. We coped with it, but we didn’t give up, and progress was evident from year to year. The challenge was that first step, and all subsequent steps were taken thanks to the enthusiasm and creative energy of the professional team, along with a lot of wisdom and knowledge.

The complexity of the work called for the need to form various subsidiary companies within the group. What kind of role do they play?

Seven years after the establishing of Delta Inženjering, we started dealing more seriously with engineering. Until then we’d had mostly project design jobs. The turning point came with the construction of an ice cream factory for an investor from Greece. That was a significant step for us, as we were then relatively small, and brought expansion and the shaping of our company profile. Our parent company now has six subsidiary enterprises with different specialist areas. ENIKON is engaged in the production of steel structures and equipment; DELTA PREVING provides consulting and engineering services in the field of fire protection. That is significant support to our large system in terms of essential and invaluable specialist knowledge, starting from the project task defining phase to implementation. There’s also DELTA CLEANROOM, which specialises in the production and installing of clean rooms that are important for laboratories, healthcare institutions, pharmacies… That’s also what we’re recognised for abroad. Two years ago, together with our friends from Tangsan, a Chinese company that deals with project design and engineering, we created DELTA TANG, and there I expect a great expansion and development in the field of metallurgy. Such exchanges of knowhow and experience are precious. I’m also proud of the project to construct the Clinical Centre of Serbia. It was four years ago, in cooperation with a partner from Slovenia, that we started a process in healthcare, which wasn’t in the scope of our core business.

A lot has changed in your business since you first began, but the need to exceed the expectations of clients has remained the same. Do you succeed in that respect?

It is our imperative to take an honest and responsible approach to work, and I’m convinced that’s why we endure. I think we’re known for our determination to complete every job in a correct and proper way, within the envisaged deadline; and for monitoring the dynamics and interests of investors, both in terms of quality and the dynamics of construction. That is indeed important, and I believe it’s recognised by investors. Over these 30 years of operations, we’ve had repeat investors, and that’s a great success in any business. 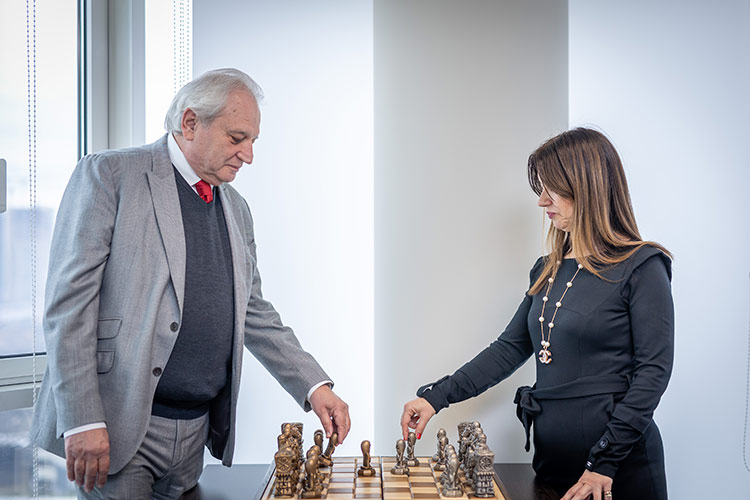 MUTUAL SUPPORT
“It wasn’t easy, but it’s my privilege to learn from the best! Delta’s excellent team, and in particular my closest associates, provide me with certitude on a daily basis, as well as certitude for the days to come.”

You long since realised the importance of understanding an investor’s idea and complying with his requirements. Not everyone is able to do that…

From that aforementioned ice cream factory, we continued developing the company in such a way that it could provide a complete service to the investor. That means explicitly deciding to act responsibly towards the investor, along the entire journey: from project design documentation and the obtaining of permits, to construction and commissioning. When the problem of a lack of some technological knowhow arises, it is important for us to know who has that knowhow and to transfuse it all and apply it to the benefit of the investor.

Among your biggest investors are EPS, Srbijagas, NIS, the Nestle ice cream factory, Alumil, Messer, Henkel etc. Does every successfully completed project also bring you a personal sense of satisfaction?

Our biggest investor is EPS, where we have a significant place as project designers, consultants and oversight. At Srbijagas, we’re engaged as designers on the main gas pipelines. We’re involved in practically everything significant that’s built in our sphere of interest.

I would like to note that it is thanks to the enormous efforts being exerted by EPS to improve the ecological standards in the thermal energy sector that we are currently working on projects worth more than a billion euros. These are projects related to desulphurisation, wastewater treatment, the reduction of nitrogen oxides and heating for Belgrade and Obrenovac from the Thermal Power Plant in Obrenovac. They are all greatly satisfying, and I take personal satisfaction for what is called Corporate Social Responsibility. It’s extremely fortunate when you’re in a position to contribute to your country in every sphere where your contribution is needed.

That makes me sincerely happy, and I feel proud that we’ve carved out our own place in Serbia. That wasn’t easy to build, but we’re at the very top in the business we do. It feels good they want to work with us, that our good reputation has spread beyond Serbia, that we are a desirable company to cooperate with and that we are called for our advice and opinions. That’s the greatest satisfaction.

Construction of the Clinical Centre of Serbia might not be the most demanding project you’re working on, but it is a special one. Are we even aware of what Belgrade and Serbia will gain once it’s completed?

The Clinical Centre is a huge challenge. It was extremely demanding to construct 130,000 square metres while simultaneously redesigning and sticking to the deadline for such an important facility. I think it’s sinful that Serbia couldn’t muster the strength to complete it when construction started. Now everything had to be harmonised with new regulations, laws, seismological conditions etc. Technology in healthcare is changing at such a pace that we had to redesign some things on the go. That’s all now nearing completion. We’re slowly launching the systems and I believe everything on the construction side will be completed by the end of February. What follows is the huge operational job of making such a complex facility operational; a facility that’s more complex than anything ever built in our country.

What kinds of results and plans do you have as you await the company’s birthday; and what role is played by your daughter Aleksandra Todorović Sučević?

I enjoy collaborating with my daughter, who’s the assistant director. She is a philologist, so it wasn’t easy for her among engineers, but she fought successfully for her role and place. Good work is done in a good atmosphere, so I believe that’s a good setting for her. Next year will mark 50 years since I started working and I would like to commemorate that in some special way. Even today, I still enjoy the work I do because I work leisurely, without tension. We’re entering this business year with 40 million in contracted jobs and the business is developing well, so we can work and plan calmly, and consider innovations.

A Referendum As An Overture

The Serbian opposition continues to court the myth that the West brought Vučić and the Serbian Progressive Party to power and will cast them...
Read more

Any Mining Project Must Respect The Highest Standards

It is not for me to judge arguments of different parties – the EU is not involved and does not finance the lithium projects...
Read more

Is Inflation Our Destiny (Again)?

He Who Sows Incorrectly Has Small Hope Of A Bountiful Harvest

This time around, inflation didn’t occur as a result of the excessive printing of dinars, unlike many of the previous periods of inflation that...
Read more