The Market Believes In Our Brands

Upon his arrival at Carlsberg Srbija Group, Vladimir Vava set the goal for himself and his team of recovering and further developing Carlsberg’s operations in the region, by rebuilding the trust of customers, consumers & shoppers in the company’s well-known brands

Vladimir Vava, Carlsberg Srbija Group’s newly appointed CEO, is responsible for the three markets of Serbia, Bosnia-Herzegovina and Montenegro. We spoke with him about the characteristics of the domestic markets and the goals he has set as its new CEO.

What are the key characteristics of the markets that you are responsible for, and how do they mutually differ?

– When it comes to the size of the markets I’m responsible for (Serbia, Bosnia-Herzegovina and Montenegro) and trends in recent years, there are some differences. From 2008 until 2014, the Serbian market recorded a significant drop of 15 per cent, while in the last two years, there has been a slight but noticeable recovery and we hope that this trend will continue.

Unlike Serbia, the Bosnian market experienced a constant decline of five per cent from 2013 to 2016. On the other hand, Montenegro has by far the best trend, with the market having grown 12 per cent and in the past two years.

The markets of Serbia, Bosnia- Herzegovina and Montenegro have their own dynamics, but in terms of volume they are all stable, resilient and maintain quite a stable percentage of the share of sales

As I am still in my proverbial first 100 days period, so it would be unwise to describe with certitude the peculiarities and characteristics of these three markets. However, I would say that each of these markets is driven by its own local power brands that are different, and especially in Montenegro, where the premium segment is growing faster than in Bosnia and Serbia (based on Nielsen data).

Low mainstream and premium are developing, pushing the mainstream from up and down. In packaging terms, both Bosnia-Herzegovina and Montenegro are focused on NRGB, and especially on CAN, while in Serbia the name of the game is still RGB and PET, which are still ‘treading water’, despite plunging.

In all three of these countries, we observe volume stabilisation and that the beer category is showing more resilience against external economic disturbances than other categories, maintaining quite a stable percentage of the share.

How much do these markets differ from the European markets that you were previously responsible for, and are there commonalities in the habits and tastes of consumers?

– I would only talk about the Russian beer market, which is a semi-dark one (in the sense that no advertising (ATL) is allowed except BTL solely), where during the last two years the total beer market retracted by 11.8%, while the market of spirits (especially grey vodka) took a significant piece of the ‘pie’.

In Russia, the Modern Trade channel is growing fast (in just a year it grew from 43 to 53%), with relatively high consolidation (about 10 KA are accountable for more than 60% of total MT), though still a long way from Western Europe.

Moreover, two new rising trends, one named DIOT (Draft In On Trade) and the other Craft (not crafty), appeared in Russia. The first is gaining a strong impetus based on the big PET (>1.5 litres) ban and consists of draft installations in off-premises trade, where consumers & shoppers purchase beer to go (in PET bottles) from specially tailored draft installations named PeGas (foam annihilators), which are not for Instant consumption but for socialising at home with friends and family.

The other trend is small craft breweries that are producing very local (city or even village level) specialities in small quantities that are relevant mainly for people living around the area.

Again, the main difference is the fast transition of consumers from traditional off-premises trade (mom & pop shops) to organised chains of modern trade.

What goals have you set for yourself as the new CEO? 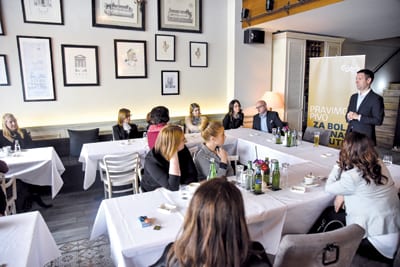 – Since my arrival at Carlsberg Serbia Group in February this year, I set the goal for my team and myself to recover and further develop the company’s operations by rebuilding the trust of our customers, consumers and shoppers in our brands, rooted in our unique brewing traditions that were established by the visionary Lazar Dunđerski 125 years ago in Čib (nowadays Čelarevo).

We have all prerequisites for this – well-known brands, quality products and a motivated team, so it’s up to us to ensure the longterm development and prosperity of our brewery.

How challenging is it to do business in markets with low public purchasing power, and how do you approach such challenges?

– As I described previously, Russia is not too different with regard to disposable income, and it is very important to have a balanced portfolio covering all segments and not to put ‘all the golden eggs in one basket’. One must look for opportunity niches and gaps that exist in the market, and utilise them swiftly.

A good example is our cider, Somersby. We are very confident in this brand and will continue focusing on that category, which is out of the core beer category but is highly appreciated by Serbian consumers.

What novelties will Carlsberg offer on the Serbian market?

– Carlsberg Srbija currently has 13 brands in its portfolio (without extension), including lager beer, radler, cider, wheat beer, dark beer, light “sunshine” beer and even craft beer, which I believe is quite a vast selection.

We will continue to focus primarily on our great brands that we are bringing into the lives of the people of Serbia, Bosnia-Herzegovina and Montenegro, conveying each day a bit of fun and bringing joy into their daily routines

It is not possible to disclose the innovations we are planning at present, but I am certainly confident that our existing portfolio covers a broad scope of consumer tastes and occasions. We will continue to focus primarily on our great brands that we are bringing into the lives of people in Serbia, Bosnia- Herzegovina and Montenegro, conveying each day a bit of fun and adding joy to their daily routines.

To what extent do multinational companies represent a good career springboard for highly educated personnel from smaller countries?

– I would like to share my own experience, as I started my career in a small city in Romania, in Timisoara, as a Store Manager in an international retail chain, and through the last 20 years I’ve gone through more than seven countries around the world and two different industries, learning continuously from the people and cultures to which I was exposed.

Multinational companies represent a remarkable opportunity for developing new generations (of youngsters) for a globalist type of business life, while the most important ingredients necessary for success are humbleness regarding different cultures, courage for trying something new and willingness to move from country to country, or the openness for mobility… and the experience is indeed priceless.

Under the auspices of your CSR activities, you support students of the Novi Sad faculties of law, economics and technology. Are there also places at Carlsberg for some of these young people?

– Since its establishment in 1847, social responsibility has been an integral part of the Carlsberg Company, and we at Carlsberg Srbija are fortunate that CSR also has its roots in Čelarevo Brewery, for 125 years. When you have such a rich heritage that already defines you, your duty is to cherish it, but also to invest in future generations to come.

One of the main activity areas of the Carlsberg Foundation in Copenhagen, but also the Dunđerski Carlsberg Foundation in Serbia, is investing in science and education. That is why we signed a three-year cooperation agreement with three faculties of the University of Novi Sad, and it is my pleasure to say that this cooperation brought us, 35 scholars.

Many of these students, as well as students from other faculties, gain internships at our company, after or even during their studies, and I must say that not a small percentage of them remain in the company.

Patients are looking for safety and quality