Safe Roads Made to EU Standards

For a full 56 years already, company Putevi d.o.o. Ivanjica has been building, reconstructing and maintaining roads on the territory of Ivanjica and surrounding municipalities. It is Serbia’s only manufacturer of safety and sound barriers under license from DELTABLOC International GmbH – the world’s leading producer of traffic safety systems, which operates in over 55 countries worldwide, from almost all European countries, to Africa, Australia and Latin America

At Putevi Ivanjica they are particularly proud of their safety and noise barriers, as these special fences have been tested and certified according to European standards. EU countries have introduced standards up to the H4b level, while Serbia is still awaited by final standardisation through the adoption of the Guidelines on Road Safety and Noise Protection Systems in accordance with European Standards (CEN).

DELTABLOC barriers also passed safety tests in Serbia on the Zrenjanin Road. Moreover, Putevi Ivanjica is Serbia’s only manufacturer of integrated barriers, which represent a combination of noise and safety barriers, and is the sole patent owner, under license, for that type of barrier anywhere throughout Europe.

One of Putevi Ivanjica’s co-owners, construction engineer Stojan Rangelov, has been in charge of this company since 1992. Speaking about operations to date, he says:
“We have adjusted ourselves to the market and launched new jobs. 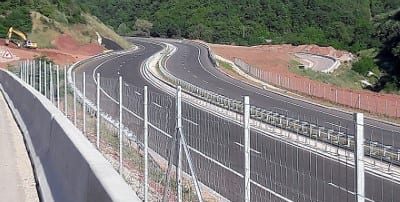 We maintain roads covering a length of around 220 kilometres, from Ivanjica, as the hub, towards Arilje, Guča, Sjenica, Kokin Brod, Raška etc. We own our own quarry and deal with the exploitation of stone and the production of gravel and aggregates of different granules, as well as various types of asphalt. We also produce concrete, amounts of which we have increased multiple times in the past several years.

“Under license from DELTABLOC we produce prefabricated concrete elements – we’ve constructed security barriers at several locations, in particular for different contractors along Corridor 10. We also produce sound or noise barriers.

Under license from DELTABLOC we produce prefabricated concrete elements – we’ve constructed security barriers at several locations, in particular for different contractors along Corridor 10. We also produce sound or noise barriers – all attested to adhere to the latest European standards

The first combined safety noise barrier system established in Serbia, around a roundabout in Kruševac, was constructed and installed by Putevi Ivanjica. We invest continuously in new equipment and machinery, in order to be able to respond to new challenges.

That would be working at high altitudes and rough mountainous areas. The Ivanjica- Sjenica road route traverses a ridge at 1,400 metres above sea level, on Javor Mountain, while we also maintain the roads od Mount Golija as well as many others that are at altitudes exceeding 1,000 m/a.s.l. Maintaining such roads requires special mechanisation, great expertise and experience – from quarrying, via construction and electrical engineers, to technologists and architects.

Which major works have marked the previous period for your company?

We’ve also carried out significant work on the maintenance and reconstruction of state roads, particularly on the IB30 Ivanjica-Studenica Road. We also built – in record time and almost impossible weather conditions – a 3km-plus road on Mount Javor that has finally connected the municipalities of Ivanjica and Nova Varoš.

Proud Of Every Metre Of Roadways

Over the course of almost 60 years, Putevi Ivanjica has completed some of the most complex undertakings, constructed thousands of kilometres of roads, conducted...
Read more

Our System is Complete

Company 'Putevi d.o.o. Ivanjica' has spent nearly 60 years working on the construction and maintenance of roads. During that time, its skilled and experienced...
Read more

We need to work together to enhance the skills of our citizens of all ages and backgrounds. The region needs well-trained workers with the...
Read more

What it is crucial is to ensure is the realisation of all rights guaranteed by the existing national and international legal framework for the...
Read more